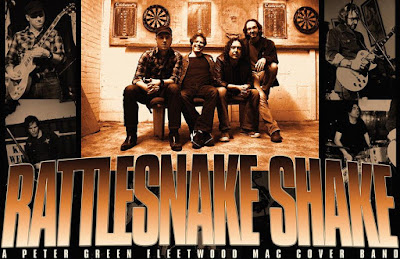 Iconic status is a tricky consequence for bands, almost all of the time… When I bring up Pink Floyd and I wanna talk about Piper at the Gates of Dawn, most people will just think of Dark Side of The Moon. Or, if I wanna talk about R.E.M.’s “Radio Free Europe,” others will just think of “Everybody Hurts…” Or, can we talk about Pearl Jam’s later records, or are they just the 2nd best “grunge” band that did that “Jeremy” song…?

Same situation with Fleetwood Mac. You can already see the Rumors cover in your head and maybe “Go Your Own Way” is starting to play in your head… But there are others with a wider perspective than me, others with keen appreciation for varied patchwork of blues music across the decades (and from across the pond), others who were more turned on by the fierier, fiercer, bristly blues sides showcased by Fleetwood Mac’s seminal years.

“It's funny when someone asks who writes all the music,” reflects guitarist Brett Lucas, after Rattlesnake Shake sets. “I can see a blank stare on their face when I say it's all Fleetwood Mac songs!”

Lucas, with Danny Methric, Tony DeNardo and Todd Glass, have been performing Fleetwood Mac covers for more than a decade. Their repertoire consiststs exclusively of the “Peter Green era…” (1967-1971). It started when the revered blues-rock guitarist Green, based over in England, left John Mayall & the Bluesbreakres in 67; by that point, Green had already infiltrated Mick Fleetwood and John McVie into that band and wrere already developign songs on the side. McVie would officially join Green and Fleetwood a little later, but we can say that 1968’s Fleetwood Mac came out on the Blue Horizon label and the rest is history; combusitbly cool, no frills blues badassery.

Not to get too much more history-teacher on you, but Green-era Fleetwood was so substantially sutured into the noble blues tract that they came to the US in 1969 to record for Chess Records, collaborating with Buddy Guy and Willie Dixon. But…suffice it to say, the Green era came to a close after a handful of records that are revered by blues-mavens like The Muggs (Methric, Denardo, Glass) and journeymen blues specialists like Lucas (who backed Thornetta Davis when this group formed and currently backs Betty LaVette. And Methric, of course, you’ll recall for his slithery blues solos scintillating the tremulous landscapes of bands like The Paybacks. So these four dudes undoubtedly dig blues, but particularly Peter Green’s brand of British blues.

Rattlesnake Shake  pay tribute to the blues band, the particularly psychedelic-tinged blues rock band  that was Fleetwood Mac, from 1967-1970. 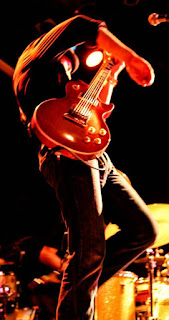 Brett Lucas:
Back when we booked that first gig at the Cadieux Café, (in 2000), we heard that people were calling there asking in disbelief if we really were playing the early Mac and not the Rumors era Mac.  It felt like a big compliment to hear that!  It's like we scratched the surface and found this fan base that really appreciate their music.  Though the early Fleetwood Mac's music is very appreciated, it is still unknown by many.  There's the older generation that listened to them when they were young.  Many of them like to share their stories of seeing the original band back in the late 60's at the Grande Ballroom.  Always great to hear those stories!  Then there's a younger generation of Blues fans that have recently discovered the Mac.  I also think there are some people that come to see us that don't know or don't even care that we play all Fleetwood Mac songs!  That's a big compliment too because they're coming to see us just because they like the way we sound as a band.  It does kind of feel something like a secret hand shake or club when you meet someone else that is a fan of early Fleetwood Mac.

Tony Muggs:
I always preempt whatever conversation with a 'fun fact' when speaking about the Mac. I'll say, "Do you know who wrote Black Magic Woman?" and the reply 100% of the time is, "yeah, Santana."  I then say, "No my friend. In fact, the Fleetwood Mac wrote that song and it was by Peter Green and before the women had joined the group." And a little puff of cloudy smoke arises from the back of their heads.
https://www.youtube.com/watch?v=7eANGHVQS9Q

What about that stigma that inevitably gets applied to being a “covers band…” It’s not l ike you guys are doing “Sweet Home Alabama” or some shit. Yours is a notably fresher spin on the whole enterprise… 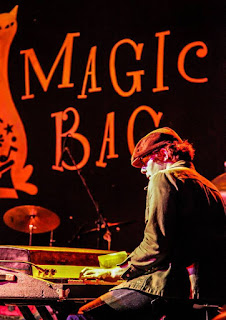 Brett Lucas:
We haven't really had many problems, if any, with that kind of stigma about being a tribute/cover band.  One thing that we have done that might be the reason for this is that we've allowed improvisation within certain songs.  This allows each of us to express ourselves individually and as a band.  I think people react to that.  Plus we don't dress up in any costumes!  We approach every show as a blues band would.  Some nights are different than others.  One night we might play a slow blues more sweeter than usual or jam louder or longer in spots.  I think that exciting for the audience that comes to see us.  But, I do have to say that with regards to all tribute/cover bands, that it takes a lot of work for any band to pull off great renditions of another bands songs.  Those bands that sound good doing that should be given credit

Tony Muggs:
It's all subjective really but I do think the more that time goes on, people will start realizing the value of those popular classic bands that musicians are feeling a need to emulate. 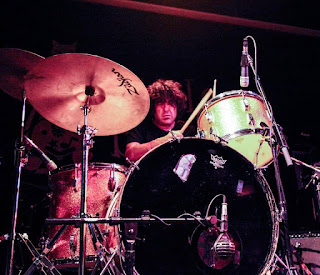 What draws you specifically to this era of the Mac? What is it about this batch of songs that possesses you and what do you find most fulfilling about bringing them to (new) life?

Brett Lucas:
For me I'm drawn to Fleetwood Mac's music because I feel like they were being true to themselves.  Yes, they were an English band playing mostly American Blues, but they were truly brilliant at what they did.  They didn't just take from the Blues like other bands of the time, they actually played it authentically.  Sure you can hear their English roots come out in their own original songs too but their knowledge of American music was astounding to me.  Plus it is rewarding to present this largely unknown music to an audience.

Tony Muggs:Passing the torch, in a sense, is what drives me to play the blues.  The blues is the foundation all forms of popular music. Country, rock, funk, jazz, pop.......you can tell some of the contemporary bands don't have a foundation and subsequently aren't that good.  Sadly, this does not mean they aren't on radio. 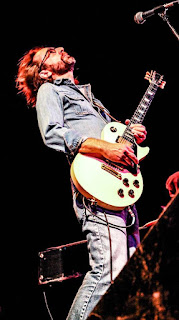 Going back to the delicate manner of re-interpretation, or giving revitalizing, signature styles to another artists work, talk about the key approach for a “covers” band, per se…

Brett Lucas:
Sure, for me it's all about history.  I think to really have the right approach when covering a band or artist, a person has to know the kind of gear they used or even existed at that time, what other music was on the radio throughout that bands career, the political environment, and also what influences those musicians had that made them sound like they do.  Even though it might sound like a band originated a sound or style it was usually came from some various influences.  Executing the vocal ranges and vocal harmonies of their songs might be something to thing about too!

Tony Muggs:
It depends on the band. Van Halen or Van Hagar? That kind of mindset you know? Do you cover a specific album or perform 2 songs off every full length release?  With the Mac, we specify that it's a "Peter Green" Fleetwood Mac tribute as to not confuse potential fans.

Okay… Favorite or quintessential song from this era of the Mac? Your personal favorite…?

Brett Lucas:
My favorite song by Fleetwood Mac would have to be World in Harmony.  It's such a beautiful duel guitar instrumental.  It was written by Danny Kirwan but hearing how Peter Green and Danny Kirwan compliment each other is wonderful.  My favorite Mac song to play though would have to be the song bands namesake The Rattlesnake Shake.  The whole band opens up while playing it.  Danny Methric and I get to interweave our guitar lines together and as a band we reach an certain high intensity with that song.  Todd and Tony lay down a groove that almost puts me in a trance.  We always put it at the end of the show for that reason!
https://www.youtube.com/watch?v=qmi8XXhnZ7I

Tony Muggs:
Geez, that's like trying to make me choose a favorite Beatles album or song. What's great about Peter Green's songwriting with the Mac is the array of emotions that you get. Some songs are just so gritty and powerful. Others are sad and introspective. Others seem to be searching for Madge....

Brett Lucas:
Well that first show was at the Cadieux Cafe because it was almost our last.  Tony had a stoke back then and we all didn't know if he would ever play music again.  We put the band on hiatus while he went through a lot of rehabilitation and rest.  Playing that first show with Tony after his stroke is the most inspiring moment with this band for me.

Tony Muggs:
We had the opportunity to play with an original member of the Mac, Mr. Jeremy Spencer at the Park Bar on January 8, 2010.  Pretty darn cool.