I mean, you have to show that you want it. It’s just one of those things. Kinda like a library, or a museum, or a neighborhood park space. You can be getting so much more out of your music listening experience.... You can get an endearing sense of community…You can learn about local events, you can gain new perspectives....

That’s if the current Indiegogo campaign for Ferndale Community Radio can raise enough funding to facilitate installation of an antennae tower and the equipping/furnishing/supplying of a decent studio space. 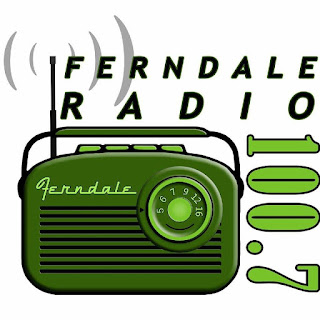 “Our mission is to bring the community closer together as a radio station,” said Michelle Mirowski, President/General Manager of Ferndale Community Radio, a Michigan nonprofit working toward setting up a local station inside the Rustbelt Market. “It is all about community for us, there’s no reason for us to start this in the first place if there was not a community-centered mindset. It’s in our name: “Ferndale COMMUNITY Radio…, that’s what drives us.” 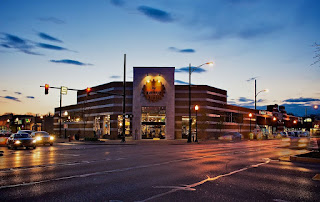 Chris Best, co-owner/manager of the Rust Belt Market, expressed considerable enthusiasm for partnering with FCR. In fact, it was initially in the Rust Belt's business plan, to eventually help set up and host a community radio station, they just hadn't anticipated the harder parts of jumping through the various hoops required to get that FCC approval... That's where Mirowski and her team come in! 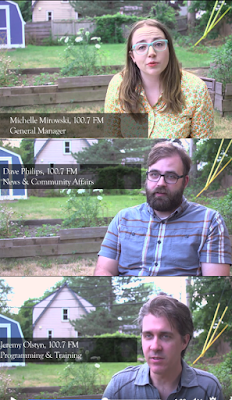 The effort started several years ago, sprung from a casual conversation concerning just how cool it would be to have a free-form radio station, something with the enthusiastic verve and empowering edge of a college station, only this time have it hosted in a city with the cultural richness and unique character of Ferndale and have it be able to promote local events, feature local organizations and showcase local artists, while also playing an eclectic and refreshing blend of music.

In 2013, the federal government opened up the FM airwavefor the first time since the late 90’s, offering licenses for frequencies across the dial to any number of aspiring groups looking to set up their own low-power (100-watt), noncommercial radio station.

Ferndale Community Radio’s board of volunteer specialists include Mirowski, her husband Dave Phillips (a journalist who will be covering news & community affairs for the station), and Jeremy Olstyn (who has substantial experience managing high school radio programs and will head programming and future training for FCR). Dave Kim, meanwhile, comes to the team with several years’ experience, including working in commercial and promotional radio, like 89X. They also have a certified radio engineer on the team, an integral component in helping with a particularly exacting part of the application process. Suffice it to say, there is decade’s worth of experience and know-how shared between the Board behind FCR.

If you were to put the FRC team into a functioning studio, with a transmitter, and help hook them up with an insurance plan and royalties system, then they’d be delivering exciting and engaging programming almost instantly! They’re ready to go; they know what they’re doing! They just need YOUR help…

Mirowski wants you to realize how rare of an opportunity this is… The FCC doesn’t just hand out these licenses willy-nilly… “The fact that we got this far and that the FCC said: Yes…. That’s ridiculous,” she’s got an excited and motivated smile, the disbelief still having not faded for them. “What we have right now? Is a ridiculous opportunity! But we have to be up and running soon. We have to be streaming 24-7 by September and we need to get all the equipment up way before that. We have to do tests of the frequency to make sure everything’s good and then there’s always any kind of other delays we can’t anticipate. Plus, we have to order parts, and that could take a few months…”

So… The sooner Ferndale chips in, the better!

In fact, if there was one dollar, just one dollar given, for every person living in Ferndale, then they’d more than reach their goal. (Of course, I’m counting babies and kindergartners in that scenario, but STILL…) “This might actually be the only chance for Ferndale to have a community FM station. The 100.7 frequency might not be open anymore if we miss this, because they’re (the FCC) changing different structures of (the dial). And if we don’t get the funding, it’s not like the FCC is going to say: ‘Oh, take your time, we’ll just hold onto this for you…’ We’d have to wait until this window of opportunity opens again…” And that could be several years. This is it, Ferndale.

There’s no backup-plan, per se. They don’t want to do podcasts, they don’t want to do just online radio, they want to give you a terrestrial radio, something you can tune in to while you’re driving down 9 Mile or chilling at home. They could become an Internet Radio Station, if they wanted, but that would mean higher royalties required to music distribution companies. If they keep it at this trajectory, just 100-watts from their hopefully-soon-to-be-erected-tower, coupled with their nonprofit status, then they can keep those royalties to a more affordable rate.

This is it… Your chance for the city to have its own community radio station. No corporate sponsors, no moneyed interests. Just passionate people doing it for the love of it and implicitly directing their efforts towards promoting local events, local artists, local businesses, local organizations…ALL FERNDALE. Right here. What do you say?