Out Of This 'Underground': New Johnny Headband Single 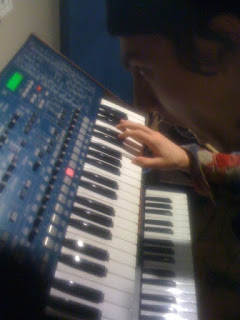 We need to become okay with occasional recesses from relevance. I mean, shit…, that word has such a retched absoluteness to it… Relevant to what? To whom?

You there, you disappear sometimes I’d wager. You back out. You hibernate. You hide underground and you shut a door and you find whatever circumstances are necessary to instill a fierce uptick in focus.

But have I got something to show you, now?


Johnny Headband’s new single, “Underground,” drops today… right now. They intend on adding a new song, here and there, to the growing Freedom Rock EP throughout the rest of the summer and early autumn.

Johnny Headband are space-funk specialists. The brainchild of the Thompson brothers: drummer/keyboardist/singer and mad-scientist Chad Thompson, with the lively bassist and co-mad-scientist Keith, and longtime journeymen drummer Robbie (aka "RKO"). So the rhythms, thusly, are consistently assured to be both intricate and irresistible and the live presentation, when it happens, is dangerously charismatic.

Never would anything sound so swaggering and yet so self-conscious, superfly cool and yet soul-searchingly contemplative. You can’t comprehensively place those ribboning synths directly into 70’s disco, nor could you put the drums into 80’s new wave; the guitars aren’t indie-rock and the reverb-soaked sing-speak crooning ain’t like any kind of “alternative-dance” track you’d typically find…

“‘Underground was built off of something Keith was just randomly doing on the bass. Sometimes our process is just to start with a bass and a boom-chop---boom-CHOP- beat… But Keith stumbled onto that bass part…” …that wavy flicker roiling under the verses… “…and I said: ‘That’s a song!’ And Keith said: ‘…okay!’”

The song’s about that anxiety to get back out “into the main event…,” to not only feel alive again, for yourself, but to remind everyone else on the floor that you’ve got surfeit stamina left, that you can still, and plan on continuing to, “bring it…” as it were…

"('Underground') is kind of in four parts,” said Chad. “Beginning…verse…chorus…bridge…and then it turns into like, this second movement, with a little spacey kind of 50’s lounge, space-lounge…, then it goes almost ‘Stairway To Heaven’ for a few measures with the guitar part…and then you’ve got some more squiggles. I mean, it’s an aesthetic that we’ve refined over the years and now we don’t question it, we just move…”

I tell him not to question the process. He tells me that’s  “…easier said than done…” Because you, any of us, will end up questioning…asking all kinds of questions…because the process of production, and we’re talking about songs and albums here, can take a long time... 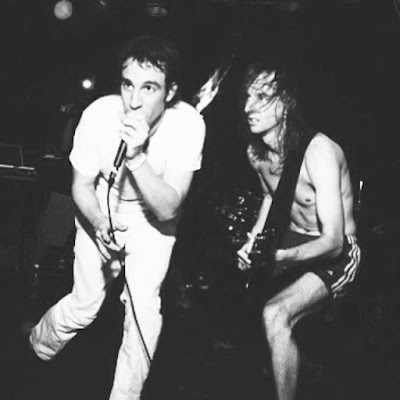 And we’ll certainly explore that in the next installment; this pressure and this restlessness that we all feel in the air, like a confidence-corroding compound undetected until ingested, to be out in the main event, to come up from your personal underground and share your presentations, wave your flags, and re-fax your band’s cover letters.

As the song addresses, Johnny Headband have “vanished…all over again, again and again…” The band has gone through phases, they’ve had “comebacks,” they’ve had incarnations… It’s always Chad in his basement, with Keith, no matter what.... And then Robbie comes in, too, along with others like guitarists Derek Dorey. It never dies. It's just... underground.

“I don’t understand ‘bands…’” Chad says. He sounds like a way-gone physicist trying to grasp the concept as if it were an alternate dimension. The notion of bands… Johnny Headband isn’t a band. And yet, they’ve got several EPs and albums out and they’ve been kicking, dancing, crooning, and generally-providing a fun, funky time, for a shade past 10 years now…

Maybe YOU can relate to that inertia you feel in your own underground.

You know what could ease that tension? Dancing…. (…and this is where you replay the song “all over again…”, pump the volume and step away from the computer for a second… That bass line…!)

https://twitter.com/johnnyheadband
Posted by jeff milo at 8:34 AM