Something crucial to undertaking the pop/rock enterprise is retaining the shine of youth upon your soul... mastering the element of whimsy as if it were your own weapon of wonder for selective detonation. That kind of vigor and vim be a struggle for some to keep secure as the years scroll by...but not Kickstand Band.


When are you not going to be happy to see a bright orange sunrise? When are you not gonna cannonball into that inground swimming pool? Why wouldn't you jump from the swingset, or slide down head first, or try popping that wheelie... The Kickstand Band, Gordon Smith (guitar/vocals) and Allison Young (bass/vocals) are releasing their third Summer EP, a tradition that seems to show no sign of stopping... It went live last Saturday night (August 13), in time for their headlining slot at Detroit's Duo Fest (at the Loving Touch).

"Ever since we started going to school, we plan our whole lives around summer," Young said, not necessarily speaking for just the two of them. "Summer is the thing you can't wait to get to..., and it's the thing you say: 'God, I can't believe it's almost over...!' You don't say that about winter...."

Summer is a pop song. Fun as hell. Fast, fleeting, furious. Over too soon. Instantly memorable, in every way. Radiant. Carefree...The bass is like a surf board, the drums are like evening fire-crackers and the skateboarding wheels of those guitars likely result in some scuffed knees and grass stains... Summer is a pop song, and the Kickstand Band have found a way to re-capture it 25-times over... Summer Dream is just another excellent example... 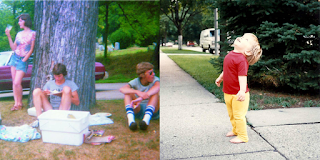 I mean, I don't think I have to wax too philosophic here... The band even has a song called "Summer Means Fun..." It's a mission statement. Plain, simple... fuckin' pure... I think what we're all digging about Smith & Young's stuff here is that it's got that palpably beating heart under it all... It isn't juicebox pop. It's two kids who never grew up and make you envious that you couldn't hang onto that as well as they could.

"Some of the ideas for (Summer Dreams' three original) songs were floating around our brains for a while, like, we've been banging around some of the changes since last winter," Smith said. "But, most of the hard work, like lyrics, structure, etc...that was seriously wrapped up just last month. These are true products of the summer. We practiced them every night for a couple weeks and then plugged in to my pro tools rig in our basement and let em rip."

They call their modest Woodbridge basement set up, Centipede Studios. The EP also features two cover songs: The Sunrays' "I Live For The Sun," (which local crowds have heard in its live incarnation), and Sugar Canyon's "On A Summer Night..."

But then, I ask Smith that dreaded cliche of a music journalist question, the one concerning what kind of special/certain sound or vibe they wanted to capture, this time around...

"Well, as far as the sound goes..., and maybe this is not the "right" answer..., but this EP was not an exercise in finding a new sound or purposeful evolution or anything like that....This was more about flexing our songwriting muscles, and our recording muscles, since this is all recorded, mixed and mastered by us..., and just generally getting in shape as a band." We'll call it: band cardio...

But let's get into it... Our last interview with The Kickstand Band delved into some significantly existential stuff, as far as band-life goes. We were talking about the recordings they'd completed a couple years prior and were storing away until that happy/unknowable day of a label magically plucking them from the dusty shelves of Centipede Studio and substantiating them into distributional-existence... Since then, they've taken it upon themselves to, as Smith said, start flexing some more of their own muscle.

"Well, we're just practicing more, lately," said Young, "...and focusing on singing, namely lots of Everly Bros' tunes... Having that kind of purpose, drive, focus...that goes a long way to stem the existential bullshit..."  And, looking back... (after releasing the last Cut Em Loose EP), Young said it was "...definitely nice to get out of the country and play some shows to foreign audiences. This recording process, like we did with Summer Dream, has also been great. When you do it fast like this, you almost don't have time to let any anxieties creep in. Even if nobody likes this stuff, it took us a month, and we can move on to the next one literally tomorrow..."

And that's the power of Kickstand Band. I don't mean their charm or their volume or their talent. I mean, they're just two people, in a basement, with great ears for melodies... And they can get shit done fast, and move right on to the next day. That's the thing about any given day in the summertime, as it is with a Kickstand Band song, whatever happens often happens fast...

Speaking of fast... The band said they have recently made some friends at the Hamtramck Skate Park. So, with their gopro in hand, they've been working on a music video to go with this new EP; stay tuned.


I ask two more questions... And the first question is what are their future plans?


So I ask, if they wrote their own book about how to make a duo work....what would their instructions be?

Smith: "Chapter 1: Be In Some Other Bands First-- Learn what you're good at. Learn how much shit there is to take care of. Learn how to do it all. Chapter 2: It's Actually A Lot Easier Once You Learn All That. Chapter 3: Know When You Need Other Musicians-- We're practicing with a drummer now, sometimes you need to fill out the sound.