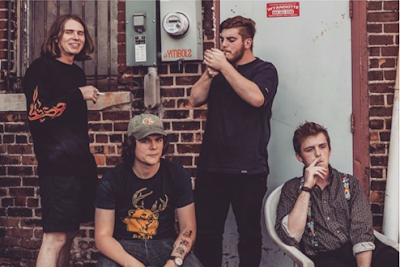 How strange it is to grow up... To be growing up... To never not be young at heart, but to always be progressing, reshaping, rethinking, reflecting...

It wasn't until Brother Son's springtime EP that it hit me; that the fundamentals of the purest kinds of power-pop should galvanize and give a voice and a tangible character to that exhilarating tension one primarily feels throughout the blur of their 20's...

To listen to Young & Pretty is to bob and to weave and to lurch and to sway... The Detroit quartet back a potent punch with croony vocal melodies, sock-hopping doo-wop-ish choruses, snapping drums and grin-inducing guitar hooks with strums set to super jangly. The lyrics detail relatable misadventures in life and love, inevitably wound up in a reassuring resolution... Because growing up is a constant climb, and each wrung, each song's episodic narration, is another twist in your life's plotline. That said, growing up, real life, relationships, that can all get so dramatic. That's where the music comes in and sweetens everything up into propulsive, fiery dance-parties. Not that this is dance music...no, it's more that it just kinda cheers up your soul in such a way that it compels you to move, or at the very least, just to loosen things up.

In just one year together, Francis Harrington (vocals/guitar), Chris Pecorelli (drums), Jimmy Walkup (bass) and Drew Gijsbers (keyboards), have sufficiently established themselves amid the local music scene with a bunch of live performances, and are now already on their way to releasing a full length album, Young & Pretty.

"Growth" is a perfect song to premiere as a single off Brother Son's new album because it embodies the kaleidoscope of emotions and energies inherent to growing up. The vocals wave in this indellible formation with the buoyant keys through the verses while the popping percussive hook and ribbon curled guitars carry you through the swoonier sway of the bridge until it all explodes like confetti for the cascading, closing chorus.

And here's a chat with singer Frank Harrington:


Tell me about what inspired you to tailor your song arrangements and melodies towards this kind of caution-to-the-wind energy...
We try to capture the feeling of being trapped in limbo between childhood and adulthood. So, that feeling of freedom, propulsion, and warmth is derived from the sole purpose of growing up. When we make songs, we write parts from our own individual minds, but since all of us are still fairly young, we try to paint that picture of what we’re going through in hopes of helping people like us grow with us as we aspire to our professional careers.

This is very poppy music, and that can be therapeutic and escapist... But it's coming out during some formidably troubling times... What do you want to do with the tunes of Brother Son, what do you aim to give listeners...

Yes, so the goal for our music is to not only provide a release to the listener in these historically crazy times, but to also represent guidance through the trials and tribulations of growing up, especially when you're growing up in the extremely troubling times that we live in. I want our songs to be on a dude’s burnt CD that he’s giving to his crush just as much as I want our songs being played at parties simply to be danced to. When we write our music, we want it to help the listener have a sense of welcoming and joy.

What are some shared inspirations among the band-members? And what is it about those artists, or the songs you each love, that draws you to them?

Some modern inspirations would be Alabama Shakes, Mac Demarco, and The Arctic Monkeys. We are also heavily influenced by the common 70’s groove as a whole. We love the sense of raw emotion that derives from each band. They present their product in such a way that it is smooth yet enticing and it really motivates us to create a product that can be easy listening or played at a party.

This new album sort of expands upon the first EP? Can you talk about that? And can you also talk about recording with Zach Shipps?
Yes, the new album actually isn’t set apart from our debut EP Young & Pretty, it is simply an addition made into the form of our debut LP Young & Pretty. The EP has this sense of being incomplete...so with this album we are trying to end this notion of Young & Pretty with a deliberate period. Recording the album was an absolute blast. We recorded it with Zach Shipps at RV Audio Lab in Ferndale. Zach was very easy to work with and we told him exactly what kind of sound we were going for and he accomplished it with flying colors.

Also, what was it like to open for Electric Six at St. Andrew's Hall back in September?
...an absolute dream come true! Being able to play at St. Andrews was such a privilege and it really empowered us as a band. St. Andrew’s is a beautiful venue and we can’t wait to play there again.

Tell me about this single, "Growth." It's a very reflective song... It refers to this crazy year we just lived through (2016, that is...), so I'd love to hear about the weight of its lyrics... But also, music-wise, production-wise, there's a heightened sense for dynamics, for a classic 50's surf/doo-wop sound... So, I'd love to just hear about this single and how it came together.
This song I wrote at the end of my freshman year of college last school year (2016-2017). I wanted it to be reminiscent about the past year and how fast life had changed. I wrote the lyrics from an introspective point of view to help me grow as a person and to get my thoughts expressed into something real and recorded. We worked on the song together as a band one day and wrote all of our parts that day. Jimmy wrote a bass line right off the bat, Drew and I worked on some melodies for keyboard, all while Chris was working on the rhythm and dynamics for the song. It was one of those things where we just couldn’t put it off and, to me, symbolizes the growth that we have made as a band.