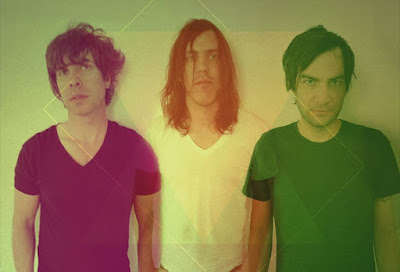 If I had my way, "trippy..." wouldn't have such a stigma to it... The very word itself conjures images of ultraviolet projections of lavalamp undulations, incense smoke, glazed eyes, woozy dance moves and hallucinogenic gates through interchangeable variations of space-odysseys...

The prevailing element of Sisters Of Your Sunshine Vapor songs, particularly with their latest, Lavender Blood, is the effect and the affect. When it comes to what we often categorize as neo-psychedelia, you're often responding to its suffusion of reverb, echo, delay, distortion..., at least I know that's the case for me. Certain timbres and intonations from guitars, bass, and snare drums will retain an eerie familiarity, but are aurally ensconced with alterations evoking something that likely emanated from the astral plains... SOYSV's knack has always been for setting an atmosphere with their entrancing melodies, but then forging something in the production period that makes it sound like a song that came from somewhere else, something that was channeled...

And yes, that all goes back to things like "Strawberry Fields Forever" and "Eight Miles High," because we all have an idea of what "trippy" music sounds like... Sure. But the significance of SOYSV's latest is that it has the blood and guts and soul of blues music, Detroit garage-rock, and post-grunge pulsing through its neon veins. There is a balance of lyricism and mysticism, the marching percussion and riffy hooks of blues and garage, with the detached, wayward orbits of space-rock, it sounds traditional at points, exotic at others; a meditation of calm, into a fever-dream of existentialism.

With Lavender Blood, this Detroit trio show a mastery of layering lots of "trippy" sounds on top; but their keen to embed a lot of enticing and adventurous substance, in sounds and in lyrics, underneath.