Wire In The Wood 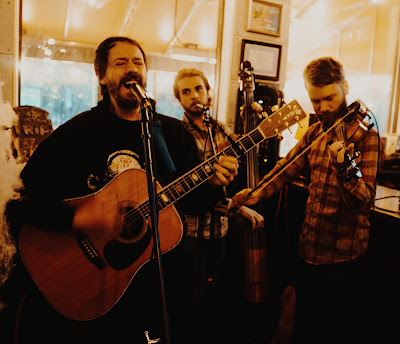 
Wire In The Wood suggests a fiber coil shooting electricity through an organic casing of timber. It suggests a higher octane energy one might unassumingly encounter inside an otherwise quiet and pastoral setting of a country thicket. This Ann Arbor based quartet come from the school of new acoustic styles, bringing a modern blend of world music, experimental pop and Americana into the well-tilled soil of bluegrass, roots, and gypsy-swing.

Wire In The Wood came together somewhat suddenly. Lead singer/guitarist Billy Kirst had been picking together with mandolinist Kyle Rhodes for a while but weren't pursuing anything serious with it. Bassist Greg Burns, who had jammed with them for a bit, called them up one fateful day and said he and Matthew Altruda needed a houseband to open things up every evening for their Bluegrass Night at The Circus Bar in Ann Arbor. Jordan Adenna joined on fiddle and, since they were playing at the Circus Bar, they went by the name of "The Bearded Ladies" for about a year, performing 20 or so Bluegrass standards as the house band.

They got out of to play at some breweries and at the Earthwrok Harvest Gathering, but, as Kirst said, "we didn't really have the fire under us at that time to try to take it to the next level." Finally, in late 2010, when Burns went off to join Greensky Bluegrass, Kirst started focusing more and more on creating a unique sound with his songs; Ryan Shea, just 15 at the time, came in to replace Burns and that's when the sound you hear today started steadily coming together.

Jump to 2015 and they're playing a lot of shows around Ann Arbor, but still not getting out on the road; still no albums out at that point. Said Kirst, "...We took some time off to wrap our minds around it, then got the itch in early 2016 to play again. That is when we started rehearsal for the record and I started learning how to manage the business side of a band."

As of just a few weeks ago, they pared down to a trio, with Kirst on guitar, Shea on bass, and Adenna on fiddle. The time they took to work toward All Fall Apart shows in their sensibility for rich and resonant arrangements that give each other's instruments room to breathe and soar. "It’s been pretty awesome working on our sound for this arrangement: finding those spaces to put in extra rhythmic emphasis, those places where we can breath and improvise more freely, those spots where Ryan can take his Talking Heads bass styles and funk up what would otherwise be straight ahead bluegrass."

Kirst wasn't moored to any one particular style of music when he was growing up, with his mother playing Motown and oldies in the house and his father digging a strange mix between classical music, movie scores, and some more oldies hits. But even though his band might fit into "roots" music, his actual "roots" were in two disparate realms - punk & dance-pop.

"I really loved to dance when I was little, so Michael Jackson was my jam. As I got older, especially into middle school and high school, music pretty much became my life. The day when I was 15 and my friend Dan and I walked into The Metro in Chicago for an all-ages punk show featuring The Smoking Popes, No Empathy, and Apocalypse Hoboken set the stage for years. I was hooked on live music. The energy was so intense. Punk shows were weekly, started going to raves, played bass in a punk band, then a weird mathy-emo group."

In 1997, two months into college, a friend basically forced me to see Phish at Assembly Hall at the University of Illinois Urbana Champagne. It was a life-changing event again. The culture, the scene, the insane energy, a band that could go up on stage and have everyone in a venue completely lose their minds. I learned so much about myself and music at that show.  As a punk, I had assiduously HATED Phish in high school, for no other reason than they were hippies."

"...but then I realized punk is all about doing what you feel is right inside of yourself, and doing it to the utmost of your ability and want. It freed me to understand the world of eclecticism. And I think eclectic is something that Wire in the Wood is, if nothing else. None of us come from a bluegrass, or Americana, or a swing, or a string band background. We’re all kinda weird. And we like to show that, we like to be that, we NEED to be that. Especially live."

Back to that meditation on the "wire" in the "wood..." Folk, bluegrass, Americana, it always makes me feel restored in a certain way; refreshed. It's because it's an organic sound that gives me respite from the technology-heavy existence we all share on a day to day basis.

"Our addiction to technology is impacting our ability to focus and grasp concepts that exist outside of easy to swallow soundbites, video clips, emoticons, and social media comments," Kirst said. "I feel there seems to be a widening and deepening chasm between our collective knowledge and the potential that brings humanity, and the ability to use that knowledge wisely, with compassion, and a clear eye toward the future."

And from that comes a lot of Kirst's lyrical inspiration. He's not specifying technology itself, but he is ruminating on aspects of the ‘real’ world that are being ignored because of (technology), like climate change, ecosystem destruction, personal isolation, societal factionalism, longing for creative expression despite overwhelming pressure to conform.  "All of those things are part of our ‘nature’ I guess," said Kirst. "Technology is part of our ‘nature’. Everything around us is ‘nature’ or natural because it has come from our Earth. Oil, plastic, Styrofoam are all made from trees in the first place, right. We, however, need to have conversations to go through the hard work of figuring out what kind of ‘nature’ it is that we really want and cherish. And that conversation, in essence, is the ‘nature of nature’."

Kirst makes a point to say that of course these guys have smartphones and use technology, too. They use a good amount of effects in their live set as well. "But for me," said Kirst, "music is not just a way to feel good or have fun. It’s not just about sounding a certain way or being over stimulating to the audiocortex. It’s a way to explore different, often difficult facets of life that we face everyday."

Back when they started, in 2008/2009, Kirst said they were one of those bands that were just happy to be playing music, one of those  "....sloppy, fast, joyful bluegrash-ish string bands," that mostly performed others 'works. "Now we are a lot more varied in our repertoire and certainly more focused and honed in our performance. One thing that hasn’t change is our dedication to improvisation. We LOVE to improvise. Sometimes it’s inspirational, soaring and energetic. Sometimes is weird and tense. Other times can be soft and sweet, or groovy. Sometimes it’s a straight up noise jam!"

But why bluegrass in the first place? Kirst draws it back to his young days in Chicago, seeing $5 punk shows at The Metro. He recognized similar characteristics in the defiance and the rowdiness and the jubliance of classic bluegrass players like Bill Monroe, the Stanley Brothers, Earl Scruggs and Lester Flatt. They were almost punk rockers in their own rights.

"They weren’t afraid to push – the tempo, their abilities, the listeners understanding of what music should be. Completely opened me up to a new world. The same is true for jazz manouche, or gypsy jazz if you want to call it that. But with Django you have, quite literally the best guitar player who has ever lived, at least in my opinion. He had energy, a need for exploration, and was not the least bit content to fit into an already established way  of perceiving or presenting music. And it’s best not to forget that, especially in the case of bluegrass, this is all dance music. People GOT DOWN to this shit."

Kirst said that the most interesting thing about playing this form of music, whether in a studio or on stage, is "...the need to throw away the conception that rhythm comes solely from percussion. Any instrument can be a percussive instrument, and in our case, needs to be a rhythm instrument. Nobody can lay down, or relax, or neglect that aspect of the music. There is no bass and snare to act as your metronome, there isn’t the ring of crash cymbal washing out any of your misplaced notes. Everything one does in a string band is laid bare for the listener to pick apart."

These Ann Arborites come to Detroit on Tuesday the 14th, after having already gotten a good footing in this scene with good receptions from Otus Supply in Ferndale. Enthusiasm is high, as they get to open up for The Infamous Stringdusters, one of Kirst's favorite bands. That band's built-in audience is likely going to find considerable resonance with the eclectic taste and improvisatory spirit of Wire In The Wood.