No bells. No whistles. Just songwriting.
Just guitar, voice, lyrics, piano, and a perfect little patina of echo and reverb.

Jamie Norte is in the spotlight. He's been to the side of several bands that I've written about in the past. But with Enough Is Enough, he's pulling back what, until now, for me, was a bit of a curtain, a curtain that goes past the punk, indie-rock, psych, and metal-tinged outfits I've heard him contribute to in the past and reveals an inventive mode of singer/songwriter stylization, balancing catchy melodies with forthright lyricism, dark night of the soul catharsis with new dawn restorations. 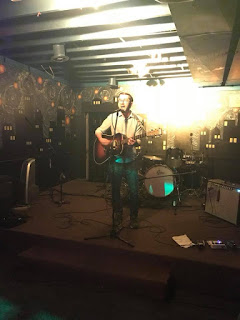 Norte, (or James North, as he's also known), recorded these tracks with Chris Koltay at High Bias Studios. That Grammy-winning set of ears augments these otherwise minimalist arrangements with a roomy sound that augments the overall presence of each song, giving an amorphous kind of aural backlighting to what is typically just three instrumental elements.

Since there are no drums, it's on Norte to thread a strumming style on his acoustic guitar that can be gliding and melodic through the hooks but also percussive enough to get your toe tapping. The song I have streaming above is my favorite example of effectively coiling a steady subtle beat to the song's progression while also tugging you with that three-chord hook at the end of each verse.

There's nothing flashy about these songs and that serves them well! The timbre struck by the piano and the rendering of its accompaniment has a tenderness, or maybe a wariness, of just being there to provide that perfect doling of emotional resonance. The guitar playing can be strummy like a coffeehouse folk singer, but can also show some intricate complexities in there cascades, such as in "Bad Days."

And Norte's voice has a taut kind of growl to it when he arcs into choruses, striking a tone similar to vocalists like Dan Bejar, Pete Quirk, or maybe John McCauley, that mid-high register that has a buzzy/hummy/throaty quality to it. I don't know if Destroyer, Cave Singers, or Deer Tick are at all playing into North's personal influences, but I can say that if you have dug what those stylists have done with the folk/Americana genre in the past, then Enough Is Enough is your  next listen...