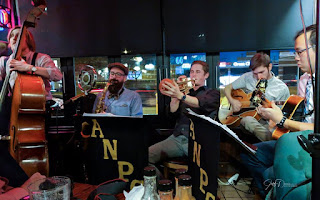 All music should have this much character and pizazz, verve and brio! The players of the Aston Neighborhood Pleasure Club infuse piques of emotions from across the spectrum, whether its hearted-eyes longing, hot-time-in-the-ol-town-tonight-rowdy spunk, wistful bittersweetness or boisterous celebration. You could almost qualify their classic jazz strains as soul music, in that it has a soul...with the way the music seems to literally come alive (even on an album) and start strutting, skidoo-ing, or jiving across the room in front of you--if not, than it compels the listener to unlock their own bodies and start wobbling about with a less-tamed ebullience.

The Ferndale-area ensemble specialize in trad-jazz vibes with a distinctly New Orleans flavor, blending in a mix of folk, country and Americana with clarinets, saxophones, trombones, and vocals, brushes and washboards, selmer/django-style guitars, the charming baritone booms of upright bass and tuba and all those signature timbres (old-timey front desk call-bells!!) that we associate with juke joints, piano bars, speakeasys, big easy's, and even, sometimes, ballrooms. It might be a music, you'd think, that would be best experienced LIVE. This is hot-off-the-skillet kind of music, so we want to ideally feel the fire of it, even if its a more downtempo waltzer... WELL then, best to capture that lightning into a proverbial album's bottle by-way-of releasing a batch of recordings caught on the fly at Howe's Bayou. The ANPC players are all pretty much lifers in the jazz, dixie, and big-band music traditions, so it's no surprise that you could sit them down in an otherwise crowded space with main drag traffic whooshing by behind them and have them nail all these jams in one take.

The ANPC will celebrate perform a release party for their new album at Otus Supply in Ferndale. The energetic, flamboyant, theatrical, and swooning songs you'll hear on this album were recorded just down the street from Otus, at Howe's Bayou. You'll find covers like "Corinna, Corinna," and "Midnight, the Stars, and You," as well as some originals that fuse right into the traditional-sounding vibe, with a bit of a fresh contemporary kick and a flourish that could only come about through the collaboration of these inventive, music-loving minds. Meet the the Club at Otus Supply this Thursday.....