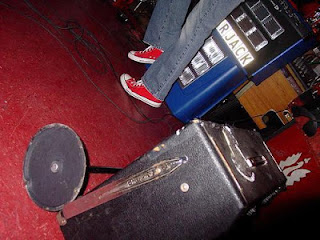 I was talking with a fellow writer this morning about a tossed-off quip from a movie review I read in the mid 1990's. I vividly recall registering shock at the appraisal, making an effective metaphor to demonstrate their distaste..., but really going for it and cutting to the bone with it--it was cruel. It was cruel, but damn if it wasn't clever. The thing is, negative criticism's barbs would have seemed sharper in the mid 1990s, because there wasn't a cottage industry of cynical one-upping memes and long-knives-drawn comments sections. The ridicule of a work of art wasn't given amplification by a SHARE or a RETWEET button. If you read a negative review on your own back then, you could make up your own mind as to whether you would explore it for yourself; that was just one critic's opinion, after all, right? But now, with a zillion sites modeled as authorities on pop culture, you can see a torrent of takedowns directed at something--something you might have seen or listened to and loved--and now you see the horde has mightily discredited it.

It's just that I'm worried we are very close to it being that no one can give themselves over, fully, to a work of art, and to feel comfortable or confident in stating their admiration for it publicly. No one should be able to influence what you like...! And I know I feel like I'm giving preachy advice to a 12-year-old struggling against the prods and dress-downs of bullies, but that is really what it has become... We are not as secure as we could be; there is a knee-jerk compulsion to present your cleverness by way of a social media post and put yourself apart from anyone else who would be crazy enough or stupid enough to like this or that... Your cleverness is your mechanism--I won't say defense mechanism, but it is a way of tethering you from falling into full fandom. I'm here to advocate for a bit of healthy mania over a piece of music...you must indulge with replays, you must sing along to it, loudly..., don't let the clever/cynical comments you see from hollow avatars hold you back.

Because everything can be ridiculed. And when that happens, it's not that "nothing is sacred," but it's that "nothing is precious...," or worse, "nothing is appreciated." Going back to feeling like I might be talking to 12-year-olds..., it's as though we experience art the way we would if we were out on a school night with our gang or gaggle of fellow 12-year-olds and we ambulated through a frightful and elaborately arranged haunted house attraction at the county fair... "That didn't scare ME..." ...we feel compelled to say. Nevermind the efforts of the crew who put together that haunted house. Or, "...that wasn't THAT good of a movie..." Or, "I don't see what the big deal is about so-and-so, their lyrics are weak..."

Are we consumers of art? Or do we more so enjoy being vandals of effort...??  Yes, the internet gives you access to almost everything. But it can't be true that everything, then, sucks... Whatever chemicals slosh around in your brain to give you a rush from being negative, you have to start ignoring them. Because it's just as exhilarating to give a work of art the chance to show you everything it has to offer. It's okay to admit that something scared you. It's okay to admit that something made you cry. Stand by it if it made you laugh. Stand by it if you like that chorus... Yes, you could think up something clever and seem cool when you get nine thumbs ups on social media for your meme that criticizes something..., but to what end?

Often, when I post a write-up on a local musician or band, it's shared with an elated preface, declaring the words I've composed as "kind..." The thing is..., all I ever try to do with posts is elucidate what I'm hearing, describe the mood/theme of a piece, comment on interesting experiments or arrangements, and just overall illuminate who this artist is....so that a reader who has never heard them before or maybe even doesn't even know what techno, punk, post-industrial or backpack rap IS..., can be invited in to experiencing this music... But since cruel and cynical is the baseline for anything on the internet, my words are thrown into that contrast of seeming more kind by comparison. Writing about music is seriously fucking emotional for me... Because I'm letting it take me over. I would encourage everyone to try that exercise on a weekly basis....

“It is not the critic who counts; not the man who points out how the strong man stumbles, or where the doer of deeds could have done them better. The credit belongs to the man who is actually in the arena, whose face is marred by dust and sweat and blood; who strives valiantly; who errs, who comes short again and again, because there is no effort without error and shortcoming; but who does actually strive to do the deeds; who knows great enthusiasms, the great devotions; who spends himself in a worthy cause; who at the best knows in the end the triumph of high achievement, and who at the worst, if he fails, at least fails while daring greatly, so that his place shall never be with those cold and timid souls who neither know victory nor defeat.” --- Theodore Roosevelt
Posted by jeff milo at 2:23 PM