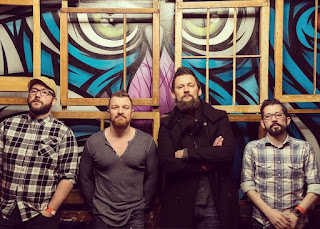 There's a certain kind of pop-rock that always sounds like its in flight. It could be as intense and angular as a jet making stunt-like maneuvers or as tender as an autumn leaf in the breeze. Local quartet Strange Heart usually evoke a gliding sense of the former, but the vocals and lyrics particularly infuse their lithe and layered jams with arena-rock-sized emotional import. On their new album, Sinking Ships, the energy of the arrangements is definitely intent on raising vessels and travelers back up above the waterline and possibly ascending them even further, restoring oxygen, launching back towards warming and healing sunrays and eventually carrying them back to shore.

Joshua Clemens (lead vocals/guitar) and Bryce Carrol-Coe (lead guitar/vocals) each returned to the Mitten from individual stints of time spent on the west coast. Before forming Strange Heart, each had some significant (and in Clemens' case, tragic) events happen in their lives: Carrol-Coe had received a life-saving heart transplant the prior year, while Clemens suffered the loss of two of his sisters to cancer. Carrol-Coe was eager to make some music upon his return and connected with Clemens--and this was just as Clemens was also looking for some much needed catharsis-by-way-of songwriting.

While Clemens heartfelt and earnest lyrics capture the weary and wrenching road back from not just severe loss, but also his seven years away from home (Detroit), Carrol-Coe similarly threads a palpably reinvigorated life into his post-rock, almost-math-rock-like guitar lines. But the propulsive energy I'm responding to is also in part due to the rhythm section of former collaborators of Clemens--Mike Schneider (on bass) and bobby Jankowski (drums). Sinking Ships rises towards resilience, by way of blending a soulful Americana sound with an aerodynamic indie-rock.