The Coffee Bean and HenriHenrietta

So, my friend Megan and I were on a reconnaissance mission back up to the luminous Plymouth Coffee Bean. We've been working on this story and wanted to get better perspective - and, at least, more photos. This is a place that, in passing conversation, I've labeled as either the "greatest" or "most magical" coffee shop on the planet, or substitute some other infatuated adjectives in there; (if that's not a good enough review--go there yourself and feel the love!) but anyhow..., we returned so Megan could take more photos of the Bean (thankfully so, because sometimes trusting my photography might be like giving a baby chimpanzee a gold rolex.) 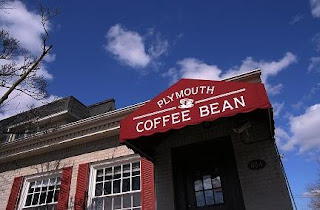 The place is set into an old colonial house, utilizing the den, living room and family room as, respectively, a reading room, a performance space and a "green" room for said performers. There's a fireplace in the reading room and the performance space has bright blue walls with puffy nimbus clouds sprawled across the blue ceiling and a Shel Silverstein poem running across the crown molding.

So we wander in on a sunny, slightly chilled afternoon, have some coffee and start meandering through; with Megan actually working, finding shots, framing them, documenting - and me, bustling around and greeting all the gathered caffeine injectors. This isn't like the Starbucks you go to in metro Detroit where you have 14 people sitting at 14 different one-person tables, with 13 of them reading off of lab tops and the 14th vehemently texting on their phone, all in their own secluded world of cold technological lobotomies.

Here, people sprawl out on couches, they look you in the eye, they nod, they smile, they talk to you - believe it or not. It radiates with a neo-bohemian artist enclave vibe but simultaneously draws in the family crowds also - the doctors and lawyers, the church goers, the republicans, the democrats, the anarchists - we're all here, man, and we're all getting to know each other. 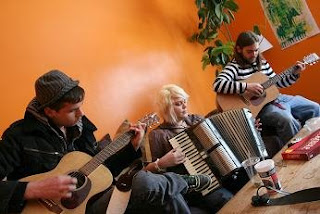 Anyway..., I mentioned a "green room" above, for all the performers who comes through the Bean, be they open mic night prose readers, touring poets and writers, or national bands. The "green room" itself is painted a blazing orange and is known, in fact, simply as "the orange room." When we walked in there we found a trio of musicians, two guys on the couch quietly playing acoustic guitars together in the slightly hushed college crowd study mood hanging over the place that day, and a girl with bright bleach blond hair sitting at her lab top with an accordion nearby. Somehow, (I'm still not sure how it happened,) they end up assembling for us together on the couch within minutes and serenading us (along with my new friend, Brian, who was working on Web sites at a near by table in the orange room) with some of their songs, interlacing bits of their story in between each exclusive performance.

This is HenriHenrietta, with Lauren (on vocals and accordion) coming from Indiana, joined by her cousin Owen Nicholas (guitar/vocals) who came up from Orlando with fellow singer/songwriter Sterling Shroeder and were also joined by singer/banjo-ist/guitarist Matt Plummer (who plays with Owen in The Priest & The Devil )

The sound is lush, harmonic folk, with staggering vocals, adroit acoustic auxillaries, heartrending vocals and poignant melodies. This touring band had traveled hundreds of miles on a shoestring budget, networking-as-they-go across the midwest, through bars and coffeeshops - and here they were playing their hearts out on a random lazy afternoon. It was staggering. Like staring in the face of pure passion; pure inspiration - here is a trio who knows exactly whey they're so far from home in a town they don't know in a magical coffee shop they've never been to - it is for the sake of music! For the love of music!

Check them out for yourselves (or wait..., because I'll be writing about them again soon...) And then move on to Owen's solo work, to the Priest & the Devil and to Sterling Shroeder's page as well.

And get out to the Coffee Bean when you can..., check out their myspace for upcoming shows: myspace.com/plymouthcoffeebean

Your writing style is refreshing. A breath of fresh air. Although I wonder... is the appreciation of someone's style simply a personal preference or in fact an indication of it's quality?