This Weekend; Northern Lights Lounge and Record Time in Roseville 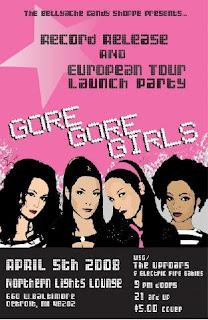 The two biggest events I can point you two this weekend are either the Northern Lights Lounge in Detroit on Saturday Night, for the Euro-tour launch of Detroit's beloved garage-pop girl group The Gore Gore Girls / or the weekend-long sale and music festival going on at Record Time in Roseville (to get the now-one-store-only enclave off to a running start as the main hub for the store.)

Opening up with be the brothers' Muldoons new band the Uproars (with Brandon from the Displays) and the incomparably storm-the-stage tribal-booty-techno-funk of Electric Fire Babies, featuring Miss N. on vocals/drums, Lo-Fi Bri of Carjack on synth/guitar and Justin (Audio) Walker of the Directions on guitar/drums. Check it out, because EFB's had their shit together after just ONE show...people won't know what hit 'em. (B-52's meets Chicks on Speed meets Suicide meets something else entirely)

April 3rd through the 6th, at the Roseville Record Time store, there's a sall: - 25% off all used items, $2 off all new items and $10 off everything else!

with DJ's all day Friday and Band's all day Saturday 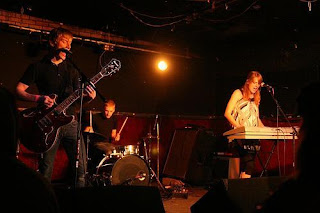 and if that's STILL not enough....
you can head up to the Elbow Room in Ypsilanti for a post-hash-bash-BASH..., with Lightning Love!
(^photo by Angi Stevens)
Posted by jeff milo at 12:47 PM