In the quaint, down-towney feeilng Plymouth area - there will be an eco-friendly event known as the Green Street Fair, highlighting Michigan-based business: 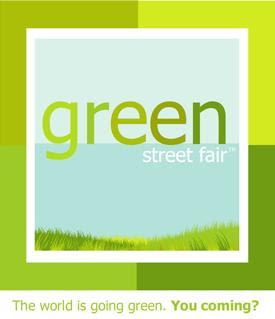 "The Green Street Fair, presented by Whole Foods Market, will blend companies, non-profit organizations, artisans, live music, workshops and speakers together in a friendly and family-oriented outdoor environment. The event will be held on the streets of Downtown Plymouth on May 3 and 4, 2008. Attendees of the Green Street Fair will be encouraged to learn the benefits of green, organic, and eco-friendly products and services. This free event will showcase local and
national businesses displaying, demonstrating and/or selling on-site."
more info at: http://www.greenstreetfair.com/event_highlights.htm
Support your local crafters Handmade Detroit for their own Green Street-based offerings, including possible volunteer work for Swap-o-rama-rama for clothing swaps and do-it-yourself-clothing workshops!
....and, to coincide with the Green Street Fair press - I thought I'd post an un-cut version of a feature that I recently wrote on one of the coolest coffee shops I've ever been to - nestled right in downtown Plymouth: The Plymouth Coffee Bean Co.
enjoy (and visit 884 Penniman Ave, Plymouth, MI):
If You're a Pretender, Come Sit By My Fire: The Plymouth Coffee Bean Company
all photos by: Megan Lang
There's love here.
Much more than a coffee shop; The Plymouth Coffee Bean really is a home, (built into a former house); a home to the burgeoning artist community of Plymouth (through open mic nights, poetry readings and live bands on weekends,) to family-raising-crowds who need a place to take their kids on Saturday morning, to Church crowds who want a bit of brunch, to weary souls who just need a bit of escape--hovering over a steaming mocha or chai by the window sill overlooking the spacious, bustling patio outside. 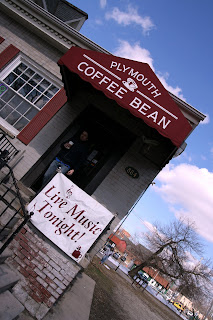 Jeffree Paul St. John, musician/poet and Bean-events planner, toured me through each dynamically colored room, past the intricately designed chalk board laden front counter, through the sitting room (by the fireplace) through the living room (its ceiling a baby-blue with scattered nimbus clouds) through "the orange room" and back, all the while brushing by bright bohemians exuding disarmingly glowing greetings of familiarity. He turns and reads my awed expression
"…kinda what a coffees shop should be…" he says, standing against "all those pop-up, bigbeat corporate fastfood coffee houses." 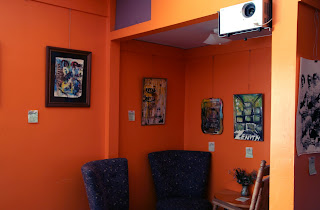 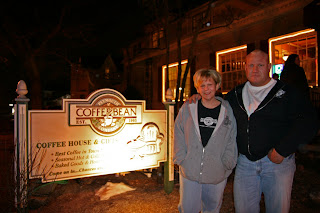 "…this is what every coffee shop wants to be…" adds Nick.
Then I piece together the history of this warmly regarded local enclave.
Down Penniman, off Main St. in quaintly welcoming downtown Plymouth, sits a humble, light-blue two story, 100-year-old colonial house. Once used for many things, including a dentists office, the lower half (upstairs is still residential apartment-space) was converted into a coffeehouse in 1993.
Donna found it in 1997, having her poetic muse spurred by recent readings, and eventually organized her own Bean-based poetry series. For seven years, her series helped percolate local aspiring scribes to frequent the 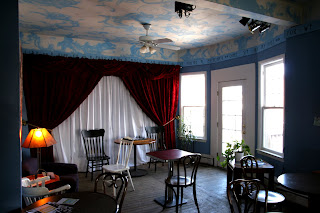 Bean, but concluded in 2004; "[the Bean] had deteriorated to the point where a lot of people didn't enjoy being here anymore," said Donna with bittersweet reflection. "The people running it [at that time] frankly weren't putting the love and care into it that [Adam/Barbie] do now."
She returned in 07, met Barbie and, says Donna with glistening eyes, the pair quickly became best friends. (The pair are recognized around the neighborhood as quasi-celebrities.) To add to the Bean's magic, Donna met the love of her life on her first day working.
"One of my missions was to provide interest for local writers," says Donna, "The Bean sits on a crossroads; last week we had people from Hamtramck, Detroit and Farmington. It's a good place, it brings out the best in people."
Donna hosts "A Gathering of Writers," monthly, drawing writers from all over Michigan, with a focus on poetry (distinct from Jeffree's open mic night-Mondays, being open to prose/music.)
In the late 90's, the luminous Jeffree found the Bean after moving back home to Livonia, (from the national slam-poetry tour circuit.) As events planner, Jeffree, having known what it's like to tour as poet and musician, masterfully facilitates the open mic night and weekend performances, keeping all the performers feeling welcome and comfortable.
"It's one of the better rooms," said Jeffree, in front of the red-curtained stage, "'cuz it's a listening room; for people who play bars it's a whole different vibe. This is an intersection for so many people, there's so many relationships here and I've always seen the potential of it. Basically, everyone knows everyone; it's one of those places."
Jeffree broke from event-planning around the same time Donna described, in 03, when the Bean's vibrancy seemed to wane.
Enter Adam, who'd always dreamed of running a coffee shop someday. With a BS in Health Education and Human Performance, he runs S.W.A.T. ("sweat with a trainer") and is also a top national bodybuilder and former "bad guy" wrestler. When one client said he was trying to sell two coffee shops (one being the Bean) Adam showed an interest and drove over to check the place out.
He and Barbie met on match.com 6 years ago and were engaged 7 months ago. Barbie, who grew up in Belleville, said she found her true calling in pastry school – which tied together perfectly with Adam's new plans, when he drove her over to the still-feeling-un-loved
Bean in 06 and said to her, "We could own this place!"
"It's your home away from home," said Adam, "people actually call it their home," and "we brought love back into it." (As well as brought Donna and Jeffree back.) 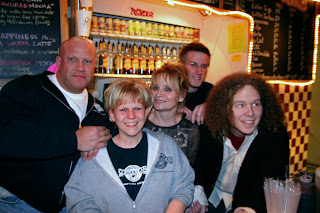 In 15 months, the duo replaced furniture, painted everywhere and offered a revamped menu, with homemade sandwiches, hummus, iced drinks, unbeatable hot chocolate, muffins, cookies and on Saturday mornings– pancakes! The drinks are overwhelmingly delicious and inventively mixed. The beans all come from local roasters, the sandwiches are all health-conscious and on Fridays and Saturdays the joint's open 24-hours, with midnight movies on Fridays.
Support of local art continues with each month featuring a different portrait/illustrator's work hanging in the listening room.
And, if Barbie sees sidewalk-passersby with Starbucks, she dares them to trade cups. In fact, Starbucks, with their corporate droll, helps the Bean, said Adam, because "when people come from Starbucks to here they see that we care about you…"
here's love here…and coffee.