SikSik Nation and Freer give updates on their recorded labors over this foul bitch of a winter. Spring is here at last and these are just a couple of many local album releases on the horizon. 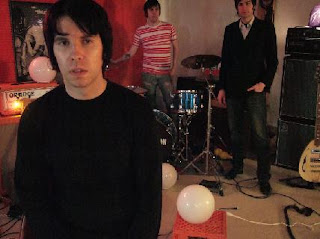 SikSik bassist Eric Oppitz surmises the experience of recording their debut full-length, Eight Styles to the Unholy (out in May):

"We tried hard to maintain our “garage” roots and energy by recording all of the music as a live band. This also helped give the entire record a very organic feel, which turned in to (some planed some not so planed) experimentation and improvisation. There was a lot of pent up evolution that all of us as a band were going through and it all kind of exploded into a barrage of pedal pushing, upbeat, swing your hips psychadelia. We are extremely pleased with the outcome and can not wait to share it with everyone."

Look for their release show on 5/10 with the Questions and Silverghost at the Elbow Room in Ypsi.

~
Meanwhile, Jeremy Freer discusses the new direction of his band's writing - coming on the heels of an exertive winter tour with SSM and the Von Bondies. 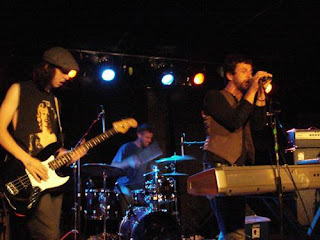 -how does the new material (album tentatively titled On The One) distinguish itself from the first record (Secret Chorus)?

Alot of the songs on [SECRET CHORUS] were rollercoaster rides. This time we are going for the Merry -Go - Round or the Tilt - A - Whirl. Either you'll have a blissful smile or you'll want to puke when you get off. Not that we are ditching dynamics completely. I'll never get sick of a good rollercoaster ride. There are also alot of warnings on this record to ourselves as well as to others. Demons are fallen angels you know. Robots are getting more advanced. Who are your friends and lovers? Plus just some good old fashion tunes to help us keep going through all of the anger and sadness."

-what's the recording process like and how has that been going? what are the advantages/disadvantages of doing most of the producing/engineering yourself?

This has been a real learning process because besides for a 4 track I've always paid for a studio to do the "professional" sounding stuff. But I've never really gotten close to what I wanted. And thats not really the engineers fault. I'm just not great at communicating what I want. We like the fact that rise or fall we are trusting our own instincts. We are trying to learn enough to make the songs sound full and immediate without getting so technical to the point of producing the life out of the tracks. We record at various spots. Churches, living rooms, basements, bedrooms etc."

-you've said the soul, the funk and the r&b has really been coming in lately - what's inspired those leanings as of late?

Those are really our roots. All of our parents raised us on that stuff. Punk Rock and experimental music were a form of rebellion for us. But now it's time to let it all have it's place. We don't wanna copy anything we just want to have a crack at some beats and melodies that we've been wanting to tackle for a second now. We can't help that we're white but we're trying."

any idea of a release? summer? fall?

Hopefully Summer. Probably Fall. But we will have some new tracks up on Myspace soon and a single to give away at shows by the spring."

If you’re looking for more new tunes (for upcoming local releases) check out the Silent Years.