Imposters of the Deep Society: Saturday at the Belmont 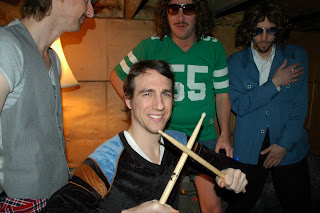 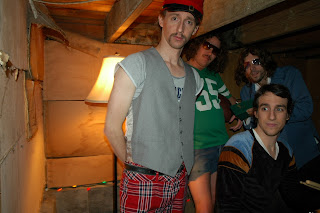 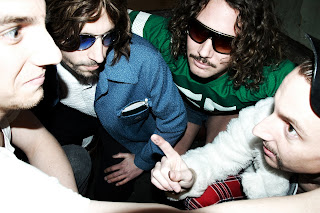 (ALL PHOTOS BY: EE Berger)

The Unicorn sent me a singing telegram – delivered in person, telling me to be at the Rogers City Holiday Inn by 6:15 am on Tuesday morning, otherwise the interview was “off.”

I arrived by taxi on that rainy and ominous morning, sketching out questions in the backseat, watching out the window as we rode through that somewhat rural feeling northern Michigan town.

After waiting in the lobby until seven o’clock, I drifted into the hotel bar to get some breakfast – a couple of slings and some stale pretzels.

Finally, at 11:47 a.m., the Unicorn, drummer for the Imposters of the Deep Society, an affable looking chap wearing a spotty t-shirt with a horned horse drawn upon it in permanent marker, comes striding up to the table with an aloof expression, finally saying that he’s surprised I waited this long – he was sure I’d have left by now.

We don’t say much. I’m able to pry a little bit out of him before the other band members arrive, but I’m self-conscious that he can read my anxiety – as I’ve been somewhat dreading this interview ever since the band’s last performance at the Knitting Factory, when the band’s bass player, Sgt. Cousin Ronnie threatened my life with a pair of, ironically, sewing shears and mumbling something about me resisting arrest.

Eventually, past 1 p.m., a Rogers City police cruiser pulls up in front of the hotel and I watch as the angular, grimacing bass player, who started his career as a sheriff, steps out (in uniform) and staidly marches to the backseat to extract a tall, broad-shouldered dude with scraggly hair, his legs exposed by his short-shorts, looking as though he’s just woken up, and fumbling a football under his right arm. I watch as the two slowly make their way in, making paranoid eye contact with the few passersby on the street.

"This is what you do?" Ronnie starts in on me as we sit down together to a rickety table in the dank, spotty bar "I've read some of your stuff…it's all mindless dribble…you should get a day job."

It’s only 10 more minutes later, only 8 hours late, that Jack The Licker, the guitar player, his long brown locks framing his tight smile with eyes hidden behind aviators, gets dropped off in front of the hotel by a passing truck carrying a load of toothpicks.

Now the interview-proper can finally begin.

First, the origin of the Imposters of the Deep Society:

Origin: The IOTDS started in Roger City, at a bar that's no longer there, in 1983: singer, Ernie Ernest Bronson, broad-shouldered, curly-haired, wearing cut-offs, was there, drinking away his sorrows having been cut by the Roger City Robots' football team, as a potential punter; the adversarial Ronnie showed up fresh from arresting and confiscating the instruments from a rock band, (the Honorable Mentions,) for marijuana possession. The Unicorn, an affable fella with horned-horse drawn on his t-shirt, happened to be driving through Roger City and stopped in the bar due to car trouble (he'd just hit a deer.) Though Ronnie was off-duty, he started enthusiastically throwing drunks out, eventually grabbing one of the guitars in his cruiser to bash the belligerently bemoaning Ernie—but after Ernie, head bleeding, somehow calmed Ronnie down, they started experimenting with a song. Luckily, it was the Unicorn's lifelong aspiration to be a bar-band drummer. One want-ad later brought them the magical 'hired-gun' guitar player Jack the Licker, but, they would not debut the band live until 2004.

"We felt it was at least 21 years ahead of it's time," says Ernie, who had also been expelled from acting school for his unreasonable ambition to only act in silent films.

Now, Ronnie reveals, they only play once a year because, "it's too much to handle…mentally…"

“We can’t help it if we’re on the cover of every major magazine – you saw those people out on the sidewalk, begging for our autographs.”

“I haven’t even been in Dunken Donuts for 10 years,” Ernie regrets. “I can’t go there anymore, cuz when I do people start shouting, Ernie-this, Ernie-that…I mean,….I wear a name-tag, but…”

Unicorn: "Like a walk in the park on a sunny day; kids and dogs abounding with joyfulness."

Ernie: "This 'loud meaningless hard rock' that might mean nothing to some means everything [to us]," shouts Ernie. "When somebody-all-artsy, talking about love all the time, makes fun of you for your enthusiasm—you get a bit bitter."

I ask Jack, owner of 16,000 guitars how he feels about being an Imposter. "I don't talk much and I don't listen much," he offers nihilistically. "I just try to wear nice colors…and play nice colors."

Ronnie: "Jack gives us special guitar powers – if he didn't he wouldn't be here. We can't stand each other. [Jack] wants our rock contribution to life, here, on this planet, and we want his…other than that, see you later, go to hell."

…You just wanna use people?

Ronnie: "Absolutely,…like you, for instance."

You've used a lot of people to climb the band-success ladder.

Jack: "We're going to continue to…"

But, you'll see those people on your way down!

Jack, how do you feel about being referred to as ‘just a hired gun?’

Ronnie: I would think a million people would kill to be in his shoes so if he doesn't like it, the next one is...

I tried to get into his shoes and I have killed, but I didn't get that check in the mail yet

Unicorn: We influence each other when we play live…in sequential chain-reactions of spontaneous inspiration.

Ernie: Who is that? No one's ever heard Judas Priest

Ronnie: People say we sound like the Monkees, that's bullshit, people say we're heavy metal - we're not, we're SO not...,

What’s the band dynamic? Are you friends?

Ronnie: can't stand each other!

Ernie: I like…(shrugging) the unicorn, but I don't like sgt Cousin Ronnie...he hits me with guitars

Unicorn: you know how some people keep themselves crazy in order to be good artists; well we just keep our hate for each other in order to maintain the sanctity of the band

Ernie: He’s jealous…(he struts over to the bar for a drink)

Ronnie: He loves himself (shaking his head at the singer) and I hate how much of a wuss the Unicorn is…

But, he’s a Unicorn…

Ronnie: Well, I hate that about him, we’re trying to make this thing that’s unified and powerful and evil and…he just fucks it up!

Jack: He does smile a lot…

Ronnie: How can you be playing rock music and be smiling?

After Ernie informs me that he’s really only performing with this band to kill time before his next punting try out (or, until people like silent movies again), I conclude by asking about rumors that the Imposters are just alter-egos of local Detroit band regulars; is Ernie the singer from the Beggars? Unicorn the singer/keyboardist from Johnny Headband? Jack the drummer for Cetan Claswson? Ronnie the bass player from JHB/Electric 6?

The Unicorn smiles and denies it politely. Jack floats away and rambles something about being able to communicate directly with his guitar. Ronnie splashes his drink in my face and storms out. Ernie threatens to punt me in the face before he jogs off.

The Unicorn and I share another bowl of pretzels.

See their only (likely) 2008 performance, Saturday at the Belmont. www.myspace.com/deepsociety

(ALL PHOTOS BY: EE Berger)