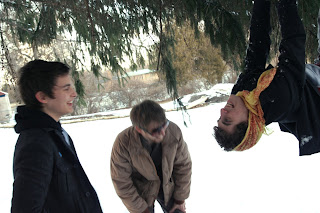 Prussia: It Just Comes Random
“I think this is someone’s property,” Megan, the photographer cautions as we traipse out of a wooded area and into a clearing, looking for more photo shoot staging areas.

“I think we could totally go though,” Prussia singer/guitarist Ryan Spencer asserts, hands on hips, nodding. “Plus, you could get some sweet shots of the cops chasing us when they come…”

Within minutes, Ryan is dangling from a pine tree branch like a human-opossum with bassist Brenton Bober and drummer Andrew Remdenok framing their upside down singer as he tells them “to look cool. You’ll be like Morrissey and I’ll be Johnny Marr.”
The Prussia guys (with drummer Steven Wagner) laugh easy and shrug modestly, exhibiting the chemistry of their longtime friendships and a refreshing unpretentious manner that leads to a casual fearlessness for a fairly experimental but primarily down to earth approach.

“We all get pretty bad grades,” Ryan snickers, referencing their respective educational pursuits, Ryan at Oakland University, Brenton and Andrew at Oakland Comm. College and Steven at Wayne State. 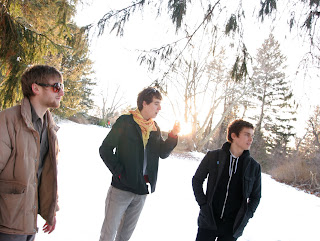 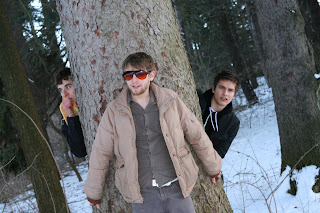 “I don’t think you can take anything too seriously,” Brenton affirms.

“Pretty soon we’re going to be 30 and making the worst music ever,” Ryan wisecracks.
Andrew and Brenton started playing music together as freshman at Adams high school in Rochester, where they also knew Ryan (then a senior) who played in a post-punk band called our-delay. Prussia was born out of a ‘folk/rock’ experiment started by Andrew and Ryan (with Brenton soon joining) in 2006 called Russian Spy Orchestration. With Ryan’s brother Drew on drums, they played their first show on New Year’s Eve (06) at the AC Rich building in Pontiac, (having changed the name to avoid sounding “too high school talent show.”)
In early 07 they recorded Artless, “kind of a melting pot compilation” says Andrew, a collection of beautifully coarse pop songs, showing penchants for both indie-noise and 60’s soul, Kinks-ian theatricality, Motown grooves and intricate rolling rhythms. They didn’t play out through the summer 07, instead the quartet of multi-instrumentalists focused on recording (as a band and on their own basement solo projects) then they reassembled that October. That same month, Steven (whom Ryan met while playing theremin with his band, Wagner-Steven) came in as second-drummer and soon after Prussia started working on their follow up.
Ryan plays a surf-toned guitar and sings in an acerbic, but shimmering teen-idol croon with Brenton adding smooth, distinct bass grooves, while Andrew plays an upright bass drum (usually standing up and maybe also adding sitar or melodica) with Steven’s drums having a snare, floor tom and cymbals (also standing up, and sometimes playing ‘singing-saw.’) 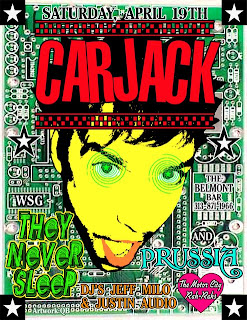 The band (who never “rehearses” traditionally, so much as gets together and records ideas) often changes live set ups also, using full drum kits intermittently, rotating instrument amongst the band and handing out percussion instruments to the crowd.
“We get bored too,” Andrew quips, “I don’t want to make anyone else watching it bored.”
“They are pop songs,” says Ryan of the new album, Dear Emily-Best Wishes-Molly, “just weird pop songs.”
“We don’t like to fit into what people want us to be,” said Brenton, noting that even if Motown is a common drawing point for all members, it may not always guide their sound. “We don’t want to release the same shit over and over.”
Live and on record, the sound is a controlled, slow-swelling explosion, with urgent pounding rhythms, strange left-field instrumentations, dreamy melodies that transmogrify into feedback churns and sweetly sung (and shouted) harmonies in a truly 60’s pop style, a weird soup of Brit-pop, doo-wop, teen-idol, girl-group and Motown.

Spicing up the pot of boiling influences are Steven’s current kick for Indian music and Ryan’s now almost-year-long fixation on reggae and dub. Throw in some Liars, Kinks, Magnetic Fields and even Ennio Marricone.

At a recent Northern Lights lounge set, Ryan said, “When you play 5 shows in a month a lot of the same people come to see you – a lot of times we’ll do different shows just to try feeling out what we want.”

“Yeah,” he says, “I would hate it if we just played the same songs every night in the same way.”

That night, my third time seeing them, is still yet-different with a new set up and new songs.