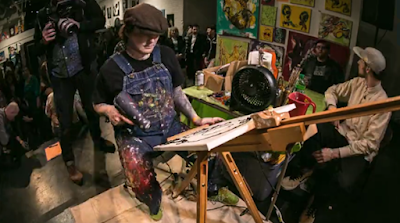 I can't imagine what it would be like to have my sight and then go blind. I know you can't, either. You're using those eyes to read this very paragraph...

But imagine your life, your day-to-day activities, your hobbies, passions and pursuits...in the wake of losing your vision...

Brendan Patrick is a local artist who lost his eyesight from complications of cystic fibrosis and other medical ailments. Brendan's perserverance is undoubtedly commendable, but his spirit, his outlook (for lack of a better word) on life, as well as his unquestionable talent as a painter and musician, are altogether inspiring. It makes me, personally, question what I may have been delusionally building up as real barriers in my own life...and whether I've just been psyching-myself out of knocking them down. Cuz even blindness isn't holding Brendan back...

Get Super Rad is a MIchigan-based production company, with Chris Rosik and Rob Cousineau. Rob & Brendan have been lifelong friends and the latter has witness the former battle through times of both illness and health, often casting off the illness as though it were just a minor inconvenience. From Cousineau:  "The effect Brendan has had on my life will resonate long after he is gone, and I want to share that sentiment with as many people as I can while he is still here to appreciate the end product...."

So Get Super Rad is producing a film on Brendan called "Can't See Sh*t" (...the title was suggested by the artist, himself).

You can learn more about Brendan, about Get Super Rad ...AND about the recently-launched indiegogo campaign calling on YOU, you appreciator of art, of humanity, of life and soulful enrichment, to conisder chipping in...