Interview: Kameryn Ogden of Islá (...formerly Air Is The Arche) 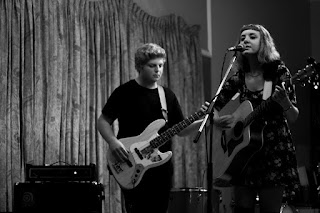 Kam’s got a voice that can freeze a room. I’m not implying temperatures, I’m just saying, things stop. If there are cars revving past the venue, outside, then that white noise is deadened away and even if the clamor back at the bar may continue to murmur, that voice of her still supplants it. Like some idyllic brook, the vocal melodies always careen gracefully over a naturally augmenting bedrock of rhythm (with bass and drums provided by Will Lorenz and Kyle Shelest respectively).


Kameryn Ogden is the singer/guitarist of a band called Islá. And it’s assured that have never heard of that band until now, but it is still the same band you once knew as Air Is The Arche. The Detroit-based trio isn’t old enough to drink yet, but they’ve still made a considerable impression on the local rock scene, initially with their blend of pastoral folk and melodic indie-pop, but its since developed several more facets, including some flavors of jazz, ambient sweeps and some richer renderings of chamber-pop.

Air Is The Arche is now Isla. 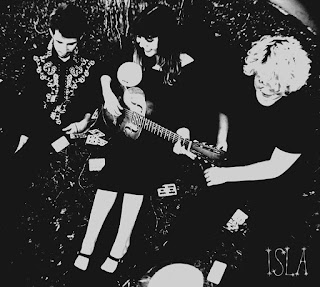 “The name doesn’t really represent our music, anymore,” said Ogden, who is just finishing up her first year at Wayne State (studying art). “We came up with it when we were younger, but nobody could really understand or say it properly; ‘arche’ means ‘origins…’

So here’s your origin story. Ogden has been writing songs since 7th grade, around the same time she started jamming with Lorenz. (They both went to Grosse Pointe North). She formed her first band, in fact, in 8th grade, but found she clicked best with Lorenz’s bass stylngs.

But let’s go further back. Ogden got into music when she started playing flute in 5th grade. In fact, it’s the flute that sort of ineffably influenced the way she began using her voice as a singer. “I’ve just always been drawn to singing. I was in choir, too. It’s weird, but I don’t really remember ever actually practicing (singing) when I was younger. It just built on itself. Flute helped a lot, though.”

The songs you can hear on Isla’s first EP …ya know, back when they were known as Air Is The Arche have been with Ogden for several years. Now that they’ve got enough ears on their music, the trio is synching the transition with this name change.

“What really inspired me to pursue music,” said Ogden, “was this tour that I went on, recently, with Olivia (Mainville & The Aquatic Troupe). That totally changed things. I was just new to it all, so I didn’t have that much exposure, until then. (Mainville) just opened my eyes and the tour itself was magical. I can’t imagine anything else I’d rather do, since then.”

Plus... Mainville got Ogden involved with Girls Rock Grand Rapids over the summer. "I was thrilled to learn that there's a sect in Detroit also," Ogden said. "The women who ran the Grand Rapids sect were fantastic and did a good job in creating a positive environment for the campers to experiment with music, which is a really beautiful thing to see. The women I've met who run the Detroit sect seem just as motivated to make the camp the best it can be so I'm really excited to be a part this year. I'm very new to this scene of musicians but all the ladies I've met have been extremely warm, inviting, and inspiring to me as I continue to grow as a human and musician." 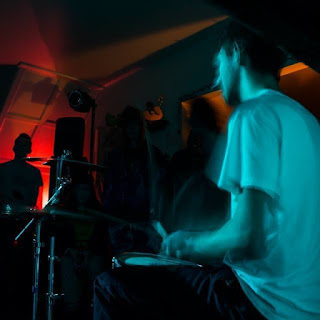 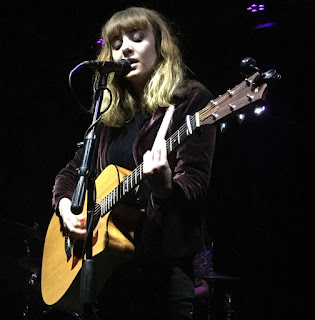 Both Mainville and Ogden are part of a more amorphous band of singers and musicians known as The Industrial Ensemble. This group assembled during the auxiliary contributions to Jack & The Bear’s epic new quirk-popera, which started streaming a couple days ago (check it out: https://jackandthebear.bandcamp.com/ )

Mainville, Ogden and the quartet of Jack & The Bear each have respectively tricky times trying to fit in with a scene of majority-rock and garage-pop bands; each have unique takes on baroque-styled folk and imaginative psyche-pop. Naturally, they’ve bonded and, naturally, it’s served to substantially inspire Ogden with Isla. Oh, and, of course, the Industrial Ensemble features equally impressive singer/songwriter Libby DeCamp, but let’s save that for the next interview…

Influences for Ogden include, of course, DeCamp, Mainville and Jack & The Bear, but also other folk-reinvention-ists like PHOX, Kimbra and spacier stuff like Highasakite and Tycho. Oh, and Detroit’s Liquid Monk!

“I’ve been working with Dan Gruszka from Liquid Monk, a lot lately… We recorded an EP together that’s coming out in mid summer; it’s really melodic and ambient stuff. I’ve been to ASSEMBLE SOUND a few times for their meetings and Dan was actually working on some of Eddie Logix’ stuff, recently. And then they just asked if I could throw some vocal parts on there, for Megapowers, so I’m kinda involved with that, now, too.”

So I tell Ogden that she seems to be handling all of this business quite well, considering its still her freshman year.

“It feels like such a worthy experience for me to have, every time I work with these musicians (in the
Detroit scene). For me, I just aim to make music that’s coherent enough that anybody can listen, but make it something that pulls at you, makes you feel something, makes you think.”

Painting, just like singing (and lyric writing), relaxes her, provides catharsis, onsets meditation… The album art you see for their first release was painted by Ogden.

The new name was inspired by a very important cat, as well as folk singer Donovan. But Ogden can tell you all about it at their next show…

Until then, Isla, the trio, are eager for the summertime. That free time will provide Ogden an opportunity to finish up the next batch of songs for their next record. “I’m really starting to understand where my priorities lie. The biggest part is just getting to know more people and connecting with them, not just musically, but on a friendship level.”

Here’s to the end of the semester!