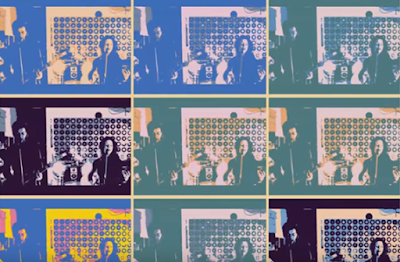 Nobody likes talking about the “business” aspects of music. I typed that with quotation marks because it’s ludicrous to suggest any sense of order or reason, predictability or logic when it comes to casting ones line out into the rivers of labels with your recordings.

I’d much rather talk about how exhilarating it is just to listen to a Kickstand Band song, or see them perform with their modest-yet-dazzling domestic lamp light show. Now enjoy a video of the duo, recorded via cellphone...

But here’s the thing: singer/guitarist Gordon Smith and singer/bassist Allison Young had an album of songs ready to be released and they were sitting on it for more than a year, and I mean that figuratively, because they were in reality doing everything but sitting. (...Butt sitting? There’s a pun here, but I don’t have time…) No, the Kickstand Band are an inherently agile band: low-equipment quantities and only two members, both with markedly high enthusiasm rates for touring and performance in general. Smith/Young have been performing consistently around Michigan and even booking their own sporadic tour stints around the Midwest over the last two years. Still, they were sitting on songs…figuratively, not literally.

Smith took to Facebook to elucidate their personal experience “trying to make it…” in the “music industry.” (And of course, we advise you to raise an eyebrow at any word or phrase caught in those conspicuous quote marks). But I finally got a chance to chat with them about what the hell’s been going on…

“We were on Suburban Sprawl,” said Smith, looking back to late 2014, when they were finishing work on the songs. “It’s a great label, great folks…but it was also, at times, more or less a one-man operation run by Zach Curd and he decided, since he’d became a dad, recently, that it was way more fun to be a dad and just work on music rather than sending out millions of emails each day and getting told no… Which, that is the music industry, as it is, today.”

“Anyway…, we were left without any label to put out this music and that just kinda froze us…,” Smith explained. “Like, what should we do with this music? We…should send it out to labels, right? That’s what you do, right? But, who should we send it to? What would be a good deal for us, what would we want? Cuz, most label deals wind up seeming pretty shitty. And, this fear is kinda paralyzing as a band, so these songs have been around for two years. It was making us cry…and we didn’t want to cry anymore. We decided to just put them out there…

“And…,” said Young, “we’ve done this before. Every time we’ve just put songs out there, like with the two Summer Eps, things have happened. There’ve been cool opportunities…”

“Yeah, literally something just happened before this interview. This NY website powerpopaholic just posted a review about the songs. I had no idea this site exists but it seems like a pretty great website, and they have their own festival…so… That’s good. That’s the internet working in (our) favor…and you can’t plan that.”

“And even while we’d been waiting to release these songs,” says Young, “we released two other Eps that we completed on our own in just a couple weeks. So, (putting out the Cut Em Loose EP) feels refreshing.”

The Kickstand Band blend effervescent jangle-pop and sleek surf style with sunburst tones and orange-juice-sweet serenades; their harmonies coalesce like the excited cacophony of a playground’s pandemonium or a coolly amble like a late summer night’s destination-less adventure. This is just pure guitar-pop, potent stuff really…, and it’s kinda bewitching in a way. The same nostalgia-high you might get from finding your old favorite comic book stash in the attic or that surge of endorphins when spring starts blurring into summer and you run your lungs out on that first jacket-less afternoon.

“What’s the most impressive to me,” said Young, “is when a pop song can be so simplistic, yet it can rule your life. It’s maddening, when something is so good, yet....how can it be so simple? That’s where harmony comes in; listen to the Everly brothers, they almost don't even need instruments! When you have two voices like that, there are checks and balances, phrasing and intonation become really important. As opposed to a single singer, who could start one place and end up on another planet. You have to really trust the person you're singing with…”

“Yeah, I had a teacher, it was Prof. Gohn Guinn, who once blow my mind just by playing me the 'melody' from this Beethoven song: https://www.youtube.com/watch?v=ffYKCNY6kUk; Beethoven, Symphony 7, Allegretto, mvt 2… The second movement (Allegretto) of Beethoven's Symphony No. 7 in A Major, Opus 92… And his point was that the melody is so simple and 'boring', but the harmonization of it made it achingly melancholy/beautiful. I took it to heart.”

The business model that works best for the Kickstand Band was staring them right in the face. Be fleet about it, be swift, be productive, keep moving, keep having fun. That’s what they’ve always been about; that, plus the DIY aspects of recording and mixing a lot of their own stuff and booking their own tours. Why wait for a label? Sure, a label brings prestige, brings support… But one can drive oneself mad by having to jump through hoops, to grovel, to pester, to turn oneself into a shell of a human who spends his and her hours emailing and following up and following up and following up….and….

“Why were we pretending we were….” Smith pauses. “Hold on, let me think of a band…K. Why were we pretending we were Guns N Roses? Like we gotta get all our eggs in one basket before a release? We need 6 months of buildup and then we’ll get a label and then do 6 more month so of pre-release-whatever-ness and then who knows how long more we’d have to wait for vinyl… It was nice to say: Who are we kidding? And just to put the thing out; let’s just do this thing that we like doing…”

Not to be a drag, but it is kind of a drag. If you read any article on the subject, i.e. “making it in the music industry…” then you’ll quickly come to the conclusion that this may very likely be one of the absolute worst times in human history to be a “mid-tier” band trying to get that extra level up… At least, if you’re trying to make a million dollars and live off your music. No way.

“Why even try to make money…” Smith said, “at the sacrifice of something that you love so much (music) and instead turning it into a job…a job that you actually lose more money at…” 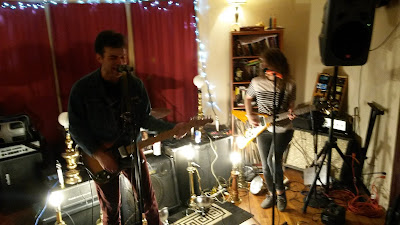 “I think every band’s trying to figure it out right now,” Smith said. “But there is no ‘it...,’ there is no figuring, there’s no answer. So, it’s not like we figured ‘it’ out, it’s that we decided to take a certain path and….and that’s a nice feeling. There’s a lot of different ways to do it now and, honestly, that’s the exciting part. Actually…it’s a drag too. But it’s fun once you realize that there’s no right answer. We’ve realized that that’s the fun part…does that make sense?”

I tell him yes, and I hope you agree. If not, then just try figuring it out for yourself, that’s the point!

The Kickstand Band are going to head to Europe soon. That’s right; keep putting yourself out there on the Internet (through sites like Sonic Bids) and you’ll eventually catch something on your fishing line… The FOCUS Wales music festival kicks off May 12 and features acts like The Joy Formidable and Los Campesinos, along with Detroit's own Kickstand Band. They'll be heading to a show in Canada as well, during their forthcoming adventures. After that, it will be summertime and it'll be just about time for another regional show, but stay tuned...

You can hear more songs on Bandcamp and you'll find the Summer EP's on Spotify.
Posted by jeff milo at 4:10 PM