Honeybabe are a local quintet who met up at a jazzercise class and just dug each other moves that much that they knew they'd have something together, if they started jamming...

Okay, so it wasn't jazzercizing...

Drummer Austin Keith, guitarist/vocalist Matt McBrien and guitarist Michael LaBella have been playing together for 10 years, having grown up in the same neighborhood and attending the same high school. Drew Bartosik joined in 2011, providing psychedelic sounds through piano, synthesizer and guitar. Danny Despard, meanwhile, joined in 2013 on bass. Despite their youth, the ensemble's shown a strong sense for psychedelicized funk-pop journeys and a measuredly strange-ified, distortion-stormed indie-rock.

Honeybabe have been hitting up stages in bars and venues around the metro area pretty regularly since 2013, (the year its members started surpassing the 21-year mark in collective ages). There's some classic flavors of mid 90's fuzz-pop cross-stitched with curly baroque mutations and splindly psychedelia, I'm thinking like Flaming Lips, Enon, Olivia Tremor Control, maybe a more esoteric Shins or a punkier Elf Power. I know dropping names is slipshod, but I assure you, they take quirk-pop and make it their own...

"We're all such avid music lovers," said LaBella, "so we're constantly looking for new sounds, new artists. We're influenced by almost everything we hear. I guess (Bartosik, McBrien) and I are the main songwriters, with myself contributing most of the material. Fortunately, though, I've been in music school for the last few years, and it's really paid off."

LaBella points to pop gods like The Beatles and Brian Wilson, those who started changing everyone's perception of how pop songs are supposed to be composed. "I'm a big believer in the fact that you don't have to be classically trained to make interesting music, but knowing the tools can really help fuel the creativity. I personally like to turn off my music theory brain when I'm writing a song, so I can completely be invested in the sounds I'm creating..."

Over the last year, particularly, the members of Honeybabe have started to finally light a fire under their own respective asses, at least according to LaBella. They're proud of the songs from their first album, Creatures of Circumstance, but can hear their youth, their more greenhorn-ish inclinations, as they listen back to it, these days. A lot can change in three years, and not just sharpened perspectives or girded wisdom.

"I think the material I'm writing now is more complex and definitely more personal," LaBella said. "I suffered a tragic loss over a year ago: losing my brother to suicide, and it's something i've been struggling with ever since. I've really been channeling the emotions i've been feeling through most of the new material i've been writing, some of which is on Velvet Glum. I think music means so much to us, and I know, for me, it's what gets me through the day, so we hope that's comes through..."

"I think one thing that sets us apart from most bands in the Detroit scene is the fact that we're not doing the typical psychedelic blues rock thing...," LaBella said. "Not that there's anything wrong with that, cuz I'm sure we have a song or too sort of in that style, but that's not interesting to us as musicians; it's already been done by so many people. It makes it almost impossible to grow with the music and to sound like you are doing something completely new and unique."

LaBella said he typically has a tough time describing the band to others, as it drifts towards but never lands on several sounds and styles. "In the end, it's all jazz..." says LaBella. "I just hope, if anything, that people hear it and say, 'Honeybabe is a solid band,' and maybe they can relate to the songs we're writing on a personal level. And, if not? That's okay..."

The EP was recorded over a two-year span, starting in their practice space (The Hydemi Collective) in Corktown, and then bouncing into one studio for a stint, only to come out and be completed DIY style with Bartosik utilizing his degree in Musich Tech from Wayne State.

One of the concepts they were dealing with, thematically/lyrically, was the behavior of people hiding their emotions while dealing with the juxtaposition of feeling happy and sad at the same time. "The idea that laughing and crying are so closely related, and you can experience both of those feelings very close to each other," said LaBella. 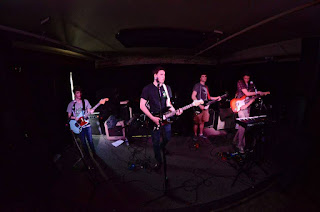 The band's future plans include "digging a whole 20 ft deep into the ground and living there for a few years..." says LaBella, "then coming out to see what's changed and mainly conserve our energy." Okay.... in all seriousness: The new EP comes out, but soon after that you can expect a full length album! After that, they're developing the Hydemi Collective (which you can find on Facebook). The group's practice space is attached to Hybrid Moments, the operators of which are part of said Collective. "With that said... we love Detroit and all the people who have been supporting us the last few years, we value each and every one of you and love you all..."