A key component to the cultural resurgence emanating out of the Corktown neighborhood is Assemble Sound. Just over three years ago, the cooperative of creative song-makers moved into a 150-year-old church beside Roosevelt Park and have since become a turbine of experimental and invigorating music - humming with collaboration as a petri dish where all kinds of uncanny chemistry between different stylists can fuse and flourish together.

Mega Powers is a big part of that... Producers/DJs/beatmakers/hip-hop mavens such as Eddie Logix and Pig Pen have been meticulously honing their individual crafts for several years before they came together two years ago as an uncommon combine of post-trip-hop odysseys bedecked with deep breath bass booms and hypnotic beats.

Pig Pen has been at it for a decade, having worked with Nolan The Ninja, Miz Korona, Elzhi, and many more. Eddie Logix, meanwhile, reflects that resume perfectly, with similar hip-hop credentials aligned with Doc Waffles, Of Mice and Musicians, Passalacqua and more. 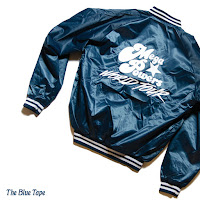 Their newest album, their second in less than a year, glides with mind-expanding instrumentals mixing together percussive styles stiched from funk and R&B.

"Deep In," one of their original instrumentals that doesn't feature a cameo from one of their Assemble friends, is a definite stand-out, as an exceptional piece presenting their interweaving visions, with a rollicking, locked-in beat snapped into this synthetic hand-clap as a subtle, sleek funk guitar chords itself barely audibly below. Until we get to the bridge, where there are some trippy-vocoder vocals, it's as if the expressive bass groove is actually the veritable lead vocal throughout. But the sweetness comes when they start drawing in all these curtains of dreamy purrs and wails from their galaxy of synths. The co-arranging/co-triggering process is a delicate one, but they seem to read each other so well.

On July 1st, you can hear the songs from World Tour (The Blue Tape) at the UFO Factory (part of Corktown Strut, and amid a lineup curated by Assemble Sound for that evening of the festival).


World Tour (The Blue Tape) continues their series of cassette tape releases with original instrumentals by this dynamic duo. Guest appearances on this album include The Dropout, Alexander Lynch, Humons, Sleepless Inn, and Daniel Monk.

You'll be able to hear these tracks next weekend at Mega Powers' bandcamp, or find them in stores like Hello Records during Corktown Strut.

...can't wait for you to hear these tracks!