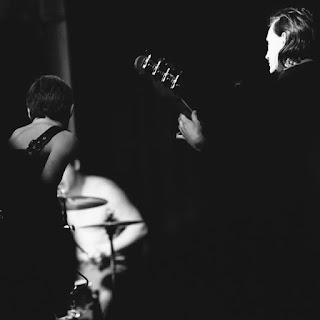 The Idiot Kids feature Jon-Mikel Bartee on guitar/vocals, Nicholas Zambeck on bass and Ryan Chlebeck on drums. The group formed in 2010 and have been substantially ripping it up at live shows at an accelerated clip these past three years.

It breaks out with a running beat and churning bass, while the guitar spews these tight spurts of distorted fire riffs over top. Bartee's vocals hit that unique high-range glide, not quite falsetto but certainly soaring....After the bridge, though, those smoother tones he hits turn raspy, throaty howls, as the tempo picks up into a more breakneck speed finding the bass and drums making hairpin turns along with those furious guitar hooks.

I wanted to ask Bartee about how the band's developed over the last three years of upticked activity, and what distinguishes the band in its current form from their first years together.

"When we started out, there wasn't really a plan of what we were going to sound like. I didn't want to start a band of a particular genre, because then you are always trying to fit your ideas into that 'sound.' I like just writing what comes to mind; let the song guide itself where it wants to be!"

When the trio started out, Bartee said they were "all over the place, as far as genre--which isn't necessarily a band thing." That being said, I'd opt on defining this band not by genre, but just by energy!

"The most important thing with this band," Bartee continued, "has always been keeping an honest and raw energy to everything, and I think we've finally achieved that on these new recordings." 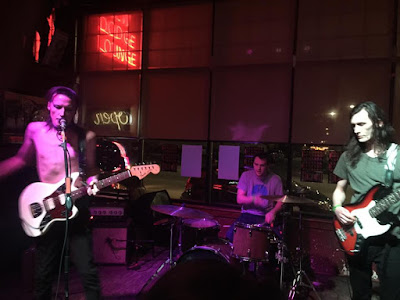 The band occupied a middle ground, when it came to Detroit's rock scene. Not quite hardcore or angular enough for punks, but not quite as sludgey and psychedelic for the garage bands--yet still utilizing characteristics from both, when necessary. "I loved the high-energy of punk and the DIY aspect of garage music," Bartee said. "When we started, I used to tell people we were 'Basement Punk...' Just kids making noise underneath the garage."

It took Zambeck, Chlebeck and Bartee a little while to start regularly getting onto bills with other bands in the city, mostly because they just didn't know enough people yet. The Trumbullplex was the first place to really embrace them, just a few years ago. Since then, they've been gaining ever more momentum...., especially now that most people have seen them live...

Live... Caution to the wind. Bodies sacrificed. Voices fried. Fingers blistered. Drum sticks snapped. Again, The Idiot Kids are all about that raw energy that Bartee mentioned. "There is a certain kind of honesty behind punk music," he said, "that I was always very drawn to. That high-energy is very freeing on stage."

Bartee said that the live shows are the most important part of the Idiot Kids. "It's when I feel the most free, creatively." The plan is to have no plan: keep it as in-the-moment as possible. "I always want people at our shows to feel like they're a part of the show, not just watching. This is why I'm always in and out of the audience, trying to get people to engage."

More info on The Idiot Kids
And check out their show, next Saturday. 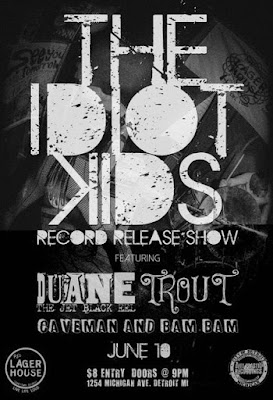