Ancient Language were at a tipping point last summer. And it seemed that Christopher Jarvis was too: Departing Detroit for the adventure of Arizona a year ago, the producer/keyboardist/electro-wizard and founding member of Ancient Language went off to follow his second (non-musical) passion of film/videography.

This summer, the band, with Zachary Jarvis and Matthew Beyer, are still at a tipping point--just, now, toward a different direction, than before...


The band, which started out in 2011 as just Jarvis' own arrangements on keyboards/drum-machines and laptops, soon evolved into a solid live presentation cerebral/funk/dream-pop, as a duo, with his brother Zachary on a formidable electric bass. But not long after that, Matthew Beyer would join, adding his atmospheric skronk/jazz-saxophone, and Matthew Hofman would cast a dazzling auxiliary cloud of spacey intonations on guitar.

They were at that moment... The band, its sound, its signature, had seemed to congeal. They just about packed out the Marble Bar for a release party of 2016's EP everybody forgives everyone for everything with its keen hybridist's sensibility for spilling out chill, contemplative, danceable, and diverse pop/electronica vibes...

But then Jarvis moved out of town, and it seemed like a new career, or at least a second option (film, rather than music) was taking shape out in Arizona. Among a handful of projects, he composed the score for a film that screened at Sundance. I wondered when Jarvis might come back; I wondered when we might here some more music from Ancient Language....

I've delayed it WAY too long. But let's get RIGHT to it...
Ancient Language are BACK. They're performing next weekend at Corktown Strut.
AND, continuing our Thursday Singles Premiere series, I'm excited to share their latest:
"Fear For Love"


And so here is "Fear For Love..."
The ambient swell from those synths opens things up, until an otherworldly xylophone leads in before a furtive drum march. These urgent percussive elements harmonize over the calmer, breathing synthesizers before the most distinct aspect of "new Ancient Language" heaves in--that being the lead vocals of Beyer. His subtly soulful, airy voice seems so perfectly matched to the sonic landscapes that Jarvis has created that its almost a wonder they hadn't considered going this route from the beginning.

Beyer's delivery evokes a sense of being swept off with a gale, until that guitar crests in like a bracing wave, something not as pretty as the synths or bass, but more guttural; cathartic. The cinematic drama slices in at the second verse when synthetic-violin sounds saw into a strange harmony with a twinkling riff, before it settles down into this pocket in the bridge where the bass can bloom and the percussion starts weaving tighter, transforming what was once ambient and swooning, into a trancelike propulsion-- Something to dance to..., move to....

While we have an interview with Chris Jarvis below, we should note that the song you're streaming while visiting this site was written by the other two-thirds members of Ancient Language-- Beyer, and Zach Jarvis. 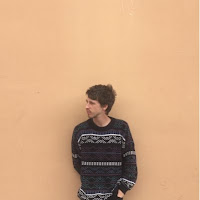 "Fear For Love" is such a departure from when you were on The Milo Show, where you did "Alive Tonight." What influenced this shift? Was it Arizona? Something else that had been bubbling up?


Christopher Jarvis:    Playing your show was the first time we performed as a 4 piece but when I first started writing that album I didn't intend on playing it that way. Having Matt (Beyer) fully onboard from the beginning, for this album, it just sort of naturally shifted into the direction we're going in now. I do agree this single is unlike anything we've done before. I just thinks its a result of more collaboration happening. Matt and Zach (Jarvis) wrote Fear For Love. Zach and I wrote the rest of them together, which was new. I think with every album we're getting closer and closer to the music we want to be to be making.

When the new songs were coming together, what kinds of conversations were you, Matt, and Zach? What was weighing on your minds, or serving as your main muse, over this last year?

Jarvis:     Most of the conversations we had were about feeling and tone, conveying emotions, making something that hopefully people can connect with and relate to. What inspires me right now is collaborating. I love hearing what my friends come up with. It's always surprising and nothing like anything I'd ever think of. That's what really excites me right now. I used to be kind of a control freak and wanted to control every aspect of a song or production. Learning to let go and relinquish some of that control to people I trust has been incredibly rewarding.

That Corktown Strut set from last year was an interesting sorta time-stamp/marker. Now, one year later, with both you and singer James Linck, with whom you've collaborated, returning after both having left Detroit, what's that feel like? I mean..., talk about just the experience of being away, of working in another art form for a while, of being an a new environment and how influenced the way you were thinking about or approaching music...

Jarvis:    I was so isolated in Arizona (that) I'm not really sure how much of that environment made it into the album, I'm sure it must have in ways I can't quite see. But we wrote most of the music before I moved there and we've just been steadily chipping away, making changes, rewriting, adding and subtracting, getting the arrangements just right. We wrote 2 of the songs in Arizona. But: ...music is music. We did approach writing differently this time, but I don't think it necessarily had anything to do with our environment. We knew we wanted to do something different with this album even before I moved there. 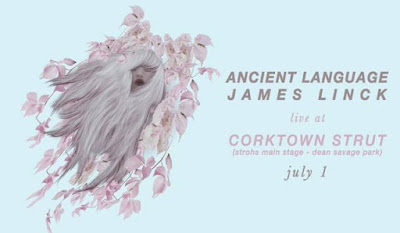 What about after Corktown Strut? What's up next for Ancient Language?

Jarvis:    The rest of the year we'll just be finishing up the album. There's still a lot of work to do. There's quite a few musicians playing on it so it's taking some time but it's going to be worth it. Other than that we'll probably play a few shows and hopefully release the album before the end of the year.