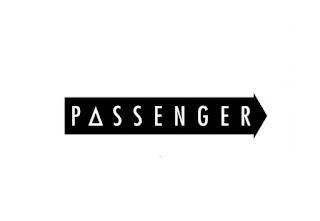 There is this enduring stereotype of touring musicians, held over from the excess-days of the 70's and 80's: it is of a lifestyle that is, at its heart, self-destructive, and yet was morbidly glamorized as the epitome of rock 'n' roll glory. You picture two hour sets, late at night, four or five days out of a given week, in a new town each night that's not your home and where you may not likely have intimate acquaintances to support you..., while a green room is stacked with two buckets'-full of beer and who knows what else, substance-wise, maybe infiltrating the backstage, bathroom, or behind the club.

While that may be an exaggeration, the point is that that lifestyle, those circumstances, are not going to be conducive to an on-the-road artist who's recently gotten sober or recovering from addiction.

A year ago, local musicians Christopher Tait and Laura Rock began collaborating on The Passenger Recovery Program: a concerted effort to provide more regional options that could support musicians and crew on the road who may be in need of finding either directions to, or transportation to support meetings. This free service aims to make the city of Detroit a welcoming space, where they can better get their bearings and be able to then attend meetings for Alcoholics Anonymous, or Narcotics Anonymous.

The problem, as I am looking at it, from the perspective of a music fan, is that our relationship to an artist, the relationship of audience to artist, stops short after we hear their albums or see them live at the show. What goes unconsidered, what goes out of our sights and out of our minds, are the very real problems that many of these musicians are dealing with, or struggling to deal with - as their calendar to calendar lives thread ever onward across a staggered schedule of very long hauls out on the road, from stop to stop, hotel to hotel, floor to floor, bar to bar to bar to bar to bar.....

Passenger Recovery, with help from other local musicians like Richie Wohlfeil, Gabe Dodson, and many more volunteers, is actively spreading the word of opportunities for touring musicians to find the support they need.

The group got a significant boost when they coordinated a book signing, discussion and presentation with Lol Tolhurst of The Cure, back in February. But I wanted to catch you up on what Passenger's been working toward, lately. 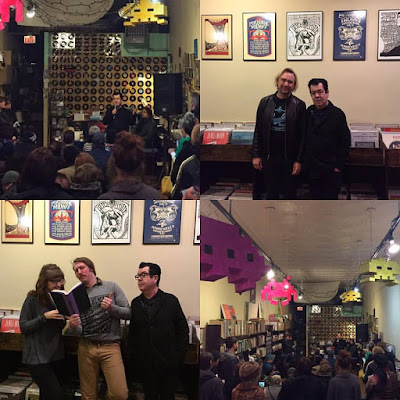 They're developing something similar to an app, that would utilize Google Maps, for incoming musicians to access (through Passenger's website), to help them find nearby meetings, or several more support groups that could treat depression and anxiety.

"Eventually, we'd like to start with (applying this mapping software) to the big cities in each state," said Tait. "Our hope is, basically, that it can catch on with enough people who want to volunteer that information or help us with that work outside of the cities, as well."

Tait has been a member of The Electric Six for more than 15 years. After a long struggle with substance abuse, he has been sober for five of those years. "Laura (Rock) was a huge part of my sobriety," Tait said, "because she got sober way before I did. And a little while ago I talked to her and some other friends in the program about being frustrated with not having enough updated or current information that I could access while out on the road to find these kinds of meetings in different cities."

The Meeting Locator, Tait said, was way beyond the scope of what he'd initially envisioned, but now that there is momentum for the group, that is the main focus.

To go back to that stereotype I'd described before, Tait puts it in his own words: "If you're sober, but you're also touring on a level that isn't a stadium tour, then you're likely not in a bus, but rather in a van and each band member is driving. You get your spot to park at whatever venue, and once you're at the gig, you're basically grounded. Maybe there's a Starbucks to go to? But otherwise you're stuck in the bar for hours..." Which is antithetical to easing the anxiety or stress of a sober musician out on the road... 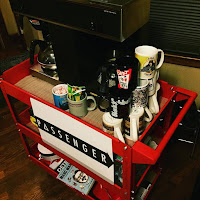 Passenger comes in to be a hub, online and in person, advocating for the idea of The Clean Green Room. "We want to spread the word, now, that this exists in Detroit, and that people touring in can rely on it if they need something like this."

The Meeting Locator, if its able to expand soon in the coming year, would allow Passenger to branch out and help people outside of Detroit. For now, with wizardly coders like Matt Tompkins and software/information-sciences specialists, the Meeting Locator is coming to life to reliably map out these options in the Greater Metro Detroit area (and eventually, much of Michigan).

"There are bigger groups out there in the country doing really great work, like Recovery Unplugged, and MusiCares," Tait said. "There's much bigger nonprofits just doing amazing work for musicians for everything from health care to rehab... But we all just wanted to do something that was within our powers, that we can do with feet on the street, picking people up from gigs and taking them to meetings or bringing them here (into Hamtramck, for Clean Green Rooms).

The Meeting Locator is currently in development, and you can find updates about it at the Passenger main site, or on Facebook.


The crux of the Meeting Locator, as well as the overarching concerns of the work of Passenger, is drawing attention to how the search for support on the road can sometimes lead to more anxiety for touring musicians and crew. Variables and free windows of time will change daily, for any given touring musician. So the hope with the Meeting Locator is to provide people with legitimate support information in an efficient manner, starting with the metropolitan areas of Southeast Michigan.

What Passenger does is provide a haven from the anxiety that can arise in the long wait leading up to a gig. Structure is key; structure for mental wellness on the road can sometimes just be a matter of sharing feelings/experiences/stories in a room together with others who have the same struggles

"It's a tricky situation," Tait said, reflecting on the double-edged sword of touring life. "Because (the venue/bar/club) is where you make your money. But you shouldn't have to compromise your passions because of your environment. (Touring) is part of musician's livelihoods. You can be passionate about something and consider it your art, but until you take it to a level where you're making money at it, it will always be that, (pure passion), and if you wanna pursue it then you have to promote it..." In other words, the bar or club is sort of a necessary evil, or unavoidable sort of evil, where the band will, very positively, connect, engage, and say thanks to their supportive fans. But for someone who is sober, says Tait, they are going to be eager to get away from that anxiety.

Sometimes people just need a bit of quiet solace. And, I should note, that while I started this post by saying it was "about musicians...," Passenger is also, of course, accessible to any member of a touring crew, sound/lights/etc, who are on the road with a band, and in need of similar support. "We've helped a lot of people on different levels already," Tait said, "it's been really good."

It started small, it still is small, but doors are opening for Passenger to things like the Meeting Locator. "It's exciting to me to be able to let people know that there's something out there; a place they can go to, to talk, or just a place to relax..."

Tait said they are not "in the business of telling other people how to live..." All they're trying to do is spread awareness and put forward the support they offer, and discuss what's worked for them. Testimonies will be going up on their site soon, and you can hear more about Passenger every month, during their meetings at Lo & Behold Records & Books in Hamtramck.

Hopefully for younger musicians, this can be an eye opener. "It's another form of awareness to put forth these cautionary tales, in a way," said Tait. "Our primary purpose is to let people know that something exists that can help. It's been an incredible year, and that's not because of one individual or another, but because we work with some amazing people."

"And, because, as we've discovered, there's a real need for this!"