There's immediate urgency to "The Science." There's this weight to those soft-toned opening vocals, and those building guitars that crest over the song's first cliff, until the drums tumble in with a forcefulness that's nicely offset by the tenderness of that violin. The tempo is a quick stride, just about on the edge of sprinting, until it fulminates toward that chorus and those hard, hurling hooks swing in with infectious energy.

This is first single off a forthcoming album by Detroit-based quintet Electric Honey
Part of my ongoing series of weekly premiers, (each Thursday).

There's just the right amount of distortion spewed through the amps of those guitars and bass, that gives a vibe of garage-rock coarseness. The drums, though, are more of a lissome cascade of a more intricate, post-rock-meets-punk-intensity... There's a lot of passion in these vocals, recalling the headier post-punk auteurs like Pixies or Talking Heads in the way the voice arcs to meet and match the intensity of the instrumentation. And then there's that violin, which finds an eerie and enticing melody that compliments the more stormier roil of the rest of the track with a more delicate glide.

Patrick Minjeur and Evan Gatny were both guitar students of the same music teacher, competing first before they were actually acquainted in the American Guild of Music. It wasn't until several years ago that they realized how compatible their musical tastes were, but life, jobs, family, and everything else kept them from finally fulfilling promises to start up a jam session until early 2014. John Labut and Matt Doppel wound up joining, as Labut had been in a band with Gatny's brother and Doppel had been acquainted with the rest of the group from tenures in other garage rock bands in the past. The violinist augmenting this track is Chris Righi.

Their forthcoming album is momentarily untitled, but is assuredly coming to a head... expect an official release later this summer. The album combines Minjeurs cryptic lyrics that conjure dreams, or portray fictional relationships and technology junkyism, with their dynamic dueling guitars, sweetening vocal harmonies, heavy drum swings, and energizing melodies.

They're performing Saturday at the Tangent Gallery 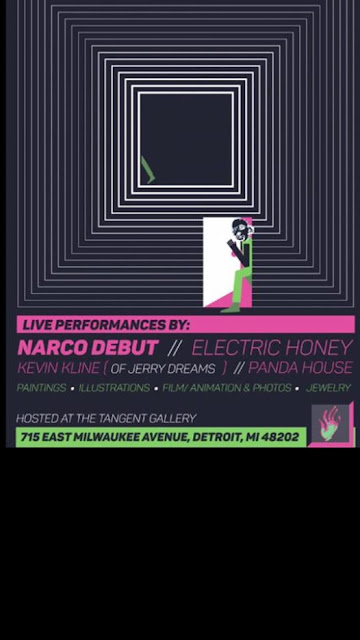