Interview with Author/Musician Ari Herstand: How To Make It In The New Music Business 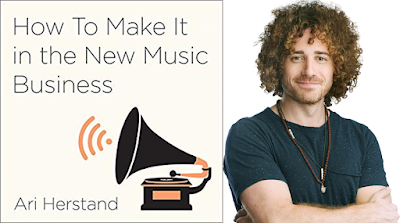 When Ari Herstand was studying music business in college back in 2005 he quickly realized his professors were “basically teaching a history lesson.” Because since then, the way the music industry works has fundamentally changed, so much so that Herstand looks back at that year as being a paradigm shift, from “the old music business to the new.”
Herstand is an author, actor and blogger who grew up in Minnesota but is now based in L.A. When he got out of business school, he was already seeing enough seismic shifts to the uphill struggles of independent musicians that he was motivated to start an online advice column in 2012. His informative posts helped his fellow musicians find practical ways to make a living in a new industry, as “the digital revolution” rendered the old ways obsolete. No longer could aspiring singer/songwriters hang their naïve hopes upon the ever-elusive record label contract. That’s why his blog, “Ari’s Take,” started tackling answers and providing advice about more modern obstacles that have emerged for DIY music makers over the last decade. That blog would evolve into his first published book, How to Make It in the New Music Business.

The Ann Arbor District Library circulates a copy of this book, if you’d like to check it out! OR, if you are closer to the Dexter Library, you can interloan Herstand’s book from the Ferndale Library‘s new Artist Advancement Collection. You can also find it at Literati.

“I remember leaving school and discovering that nothing I’d been taught was really applicable anymore to actually run a music career,” Herstand recalls. That’s because platforms like YouTube and Myspace began to change all the rules from 2006 onward. Herstand, nevertheless, still recorded his own album and started to tour around that time, but encountered the same frustrations as every musician who wonders how to get to the next level.
“I just started doing everything the hard way,” recalls Herstand. He went out on the road, developed a sturdy fan base, and eventually started selling out venues on national tours, and getting his songs placed onto TV and film soundtracks. Meanwhile, his savvy for the business side of things flourished each year as he cultivated more followers for his blog. That led to Herstand becoming a contributing writer for various digital music news websites, putting him in contact with hundreds of professionals and fellow artists who would subsequently become helpful interview subjects deepening his research for the book.
“Musicians were coming to me in recent years telling me they’d read all of the articles on Ari’s Take, but that they still couldn’t connect the dots,” said Herstand. He recalls one musician asking him online: ‘What books are out there that can walk me through this, step-by-step?’ “…and, I felt like I needed to write this! There really wasn’t any other independent musician out there that had been sharing like this, sharing information like this on a regular basis on a mass-scale format. I fell into that role. And the book was just my duty to continue it.”
Herstand acknowledges that there are other published sources of information and advice, particularly from legal professionals. But what sets his book apart is a nuanced empathy in its presentation. “I’m in it! I’m on the ground, on the front lines. All my friends are musicians! I know how challenging it is to write a bio, or to write your own press release, or take good promotional photos, or make a press-kit. I know the struggles and the blocks that so many musicians come up against.”
Herstand’s book is meticulously detailed, but never gets bogged down. His writing style is almost conversational—as though he was catching you up on all these tips and tricks over a beer after a show. He goes beyond press kits to areas of budgeting and etiquette, social media maintenance and communication skills, crowd interaction and, most important of all, the vast range of options.
“I really believe that anyone can have a career in the music industry if they put in the effort. It’s not about attaining super stardom. There are enough fans and enough money to go around for every musician to have a successful, money-making career, on various scales. It absolutely can happen—but you have to be smart about it and you have to put in the work.”
Herstand’s book was published in late 2016 and is now a centerpiece to the Ferndale Area District Library’s new “Artist Advancement” collection, for creatives of any medium who are resolved not to just sit around and wait for something to happen in their careers. The L.A.-based author/actor/blogger was in Detroit recently, and signed the Ferndale Library’s circulating copy of How To Make It.
Herstand’s book is a page-by-page breakdown of not just how to “put in the work,” so to speak, but where to put in the work. “It can be a reeducation for a lot of musicians,” said Herstand, who has also taken on freelance consultancy to those looking for career advice. “But what it comes down to is every musician has different goals. Most artists, by and large, just want to have a career doing something they love. They don’t care to be famous, they just want to make a living, and that’s who I’m concerned with… If someone wants to ask me: ‘How do you become famous?’ I’m not for you. I’m here to teach (musicians) how they can have a career.”
Written from the perspective of a working musician, How To Make It In The New Music Business is also designed to avoid bands from breaking up before their time. “Some of my favorite bands have gotten to a crossroads, where they just can’t figure out how to make it work, and they break up. I don’t want to see that happen to talented artists. I believe that if you have the talent, the drive, the passion, the dedication, then (the book) can show you how to make it work. But talent is not enough.”
Herstand said he’s gotten some push back when he suggests that “…luck has nothing to do with it…,” when it comes to a music career…. But, when a reader runs through How To Make It, they can see that it’s really about preparation. “Luck is merely when that preparation meets opportunity. It’s about maximizing opportunities—and being prepared for when they arrive.”