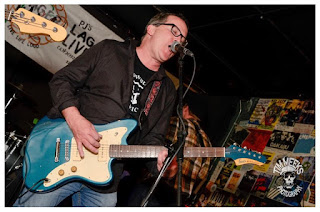 The aerodynamic pop/rock ballads of Nick Piunti are perfect examples of the temporary high that I personally hit when I'm immersed in a taut patchwork of sweet melodies, driving rhythms, and adrenaline-raising riffs. But

Nick Piunti is a longtime Detroit-area singer/songwriter who started playing in bands before he could drive. In 2013, he released his second proper solo album, 13 In The Head, and began making his way back into the Detroit music scene, following a break after his previous group, The Respectables, came to an end.

On Friday, Aug 10, at the Loving Touch in Ferndale, Piunit celebrates the release of this fourth album (in six years), titled Temporary High; backed by his band, The Complicated Men, and joined by Chris Richards & The Subtractions and The Cortown Popes.

The album's title track, Temporary High, was just featured as the Coolest Song in the World This Week on Little Steven’s Underground Garage radio channel on Sirius XM. And while I spoke of a general "high" being this temporary span of a typical four minute song, you'll have to listen to the album to hear about the actual stories of this singer/songwriters highs (or lows...) But in the interview we particularly cover the "highs..." of the last 5-6 years.

Temporary High follows after Piunti’s 2016 album Trust Your Instincts, which came out on New Jersey-based Jem Records. I haven't caught up with Piunti since he put out Beyond The Static in 2015, but we've got a recent Q&A with him about the newest record, below...

The Complicated Men features lots of vets from the local rock scene, including Ryan
Allen on guitars/vocals, Ron Vensko on drums and Jeff Hupp on bass. What they capture is a pure and effervescent kind of rock n' roll energy that glides like modern indie-pop, but rollicks with a timeless sound that could fit the Americana crowd as much as it could the garage or power-pop crowd... But Piunti's songs stand apart because of an emphasis on lyrical storytelling, which we'll get in to, in the interview.

Let's talk about just what you love about music... What drew you to rock and above all, to melody? And whatever it is, is it the same, now, as it was way back when you were a teen with the Dwarfs?
Dwarf was my first band! We started out with the intention of playing our 6th grade talent show.  The first song I ever performed and sang live was "Be My Lover" by Alice Cooper.  I remember watching The Beatles on The Ed Sullivan show, so of course that was monumental, but it was probably The Monkees that really got me hooked.  I was 6 years old, couldn't miss a show and bought all of their albums.  And they had some great pop songs.  Of course there have been hundreds of bands through the years that I fell for, but the songs had to be great.  I still search out new music, and I occasionally still get flipped out and its close to the excitement I've always had when hearing a song that just hit me the right way.  A great guitar riff, melody, and strong lyrics.  That's the recipe for me.
Are there influences you had when you were younger, or when you were with the Respectables that have stayed with you into your solo career? And, are there other nuanced influences that you've taken to more recently? Of course The Beatles are always there as an influence! And through the years there's always something new that inspires me.  When I first started writing songs I was 13, and it was probably the Stones that I tried most to emulate.  Then maybe Slade, or The Raspberries.  Then Aerosmith, Alice Cooper, Ian Hunter.  The Knack's first album knocked me out, as did The Cars.  I then got heavily into  Pretenders,Tom Petty, Springsteen, R.E.M., Plimsouls, Replacements, Crowded House.  So many bands through the years.  Probably the difference now is that the bands I used to like back then would've also been some of the most popular, biggest selling... ,But these days its mostly independent small indie bands that get my attention.  There's still a lot of great music out there, but for my ears I'm not going to find much of it on the radio, unless it's WDET or Little Steven's Underground Garage or The Loft, and other stations on Sirius XM.  And there's so many great online radio stations.  A lot of them play my music and other like minded musicians songs.

Let's go back to 13 In My Head in 2013. What was that experience like, or what was it like 5-6 years ago, when you started on the solo singer/songwriter path...?

I was actually very close to maybe hanging up making records. The Respectables released 2 albums and a 3 song EP, and we definitely had some success; we had a song in an NBC network series and in a film (Jeff Who Lives at Home) but my songwriting was slowing down and it didn't feel especially inspired.  I then found out about a local band called Friendly Foes, and their debut album blew me away.  I got to be friends with singer/songwriter Ryan Allen and we got together, worked on a couple songs together; I played him some other songs I was working on and after almost a year of doing some GarageBand demos, I headed into the studio with Geoff Michael at Big Sky Recording to see if what I had was as good as I thought it was.  I didn't have a band, just a bunch of songs.  Geoff recommended Donny Brown (Verve Pipe) to be the studio drummer.  And Geoff's engineer Chris played bass, as well as Todd Holmes (from Chris Richards and the Subtractions) on a couple songs.  I played most of the guitars while Ryan Allen added some harmonies and played guitar on a few tracks as well.  Donny is great at backing vocals, so he and Andy Reed added some great stacked harmony vocals on a few songs as well.  I wasn't exactly sure what we made, but by year's end the power pop community was really behind the record and it found its way in a lot of year end top 10 lists.  Locally, Ann Delisi, Rob Reinhart and Jon Moshier all got behind the album, so I received a lot of local airplay.

"...It's so easy to want to create that wall of guitar sound every time, but we used some restraint in that department...."

How did you approach Temporary High? And, for you, what distinguishes it from the past few albums?

I recorded "Temporary High" atthe same place and with the same people (for the most part) that I worked with on "13 in My Head", "Beyond the Static", and "Trust Your Instincts" so chances were good that it wasn't going to sound that dramatically different.  But it comes down to the songs, and I felt that I had 10 songs that could stand beside anything else that I recorded.  We tried to make the record sound a bit more intimate, let the vocals be a bit more upfront and not double track every rhythm guitar track.  It's so easy to want to create that wall of guitar sound every time, but we used some restraint in that department.  I've been writing and recording for years, so I definitely have my own style and sound, but Geoff and I wanted to tweak it a bit.  Each song also has a pretty strong story to go along with the guitars and melodies.  We also used more keyboards on this album.  Andy Reed, who played bass on the album also added Hammond B3 on several songs.  I added some keys as did drummer Donny Brown.  Geoff played synth on a song or two, and a cat from Jersey, Plink Giglio added piano on one song and some great synths on another.  So for a guitar based album there's a lot of keyboards too.  Geoff does the mixes on his own, then I chime in with a few suggestions.  I used to insist to be present during mixing, but it really works better when I can come in with fresh ears and offer a couple of thoughts. 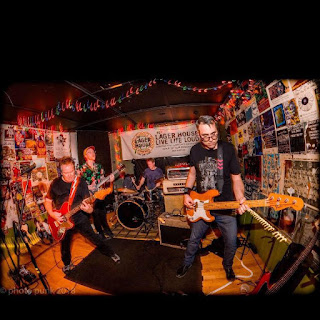 Some guys like punk and speed and flash and shambolic stuff, or metal and noise and distortion... But a Piunti record is crisp, tight, angular, hooky, clean, punchy--- what, overall, draws you to that aesthetic..., that energy?
I just write what I like.  I love great songs, I love guitars, and lyrics that make me think.  The trick is to take what you like and make it sound like yourself.  If I find that I'm writing a song and part of it sounds too familiar to something else, I'll change it.  And surprisingly, almost all of my songs are written on acoustic guitar.  Of course I'm imaging the riffs on an electric guitar, but I've always thought that a good song should stand on it's own with an acoustic guitar and one voice.  Plus it's easier to strum along at the kitchen table than locking myself in the basement with my electric guitar and amp.
What have you enjoyed most of all about the last 5-6 years?

The best part, musically, is that I can still be inspired to write so many songs that I'm proud of.  Four albums in my 50's?  No way would I ever think that would happen!

What are the highlights?
The power pop community has been so receptive, Bandcamp makes it so easy to sell records all around the world.  I had a song that Ryan and I wrote that was featured on a Mojo Magazine CD.  Being able to hear my music on Detroit's best radio station, WDET!  I performed at The Concert of Colors alongside Don Was, Luis Resto and Was Not Was in 2017. I got signed to a label (Jem Records) which led to airplay on Sirius XM's The Loft, and just this week the title track to my new album was named "Coolest Song in the World" in Little Steven's Underground Garage.  And I have a new band, The Complicated Men, which is  Ryan Allen, Jeff Hupp and Ron Vensko.

It's been a crazy handful of years...Yes. With all of this is happening now, when I was so close to calling it a day just seven years ago; it means a lot.  And the friends that I've met in the music community are just the best.  Chris Richards is someone whose music I admired, is now one of my closest friends .  Same with Ryan, Andy , Donny, Geoff.  Todd and Larry from The Subtractions.  Awesome guys. Photographer Tim Meeks is a friend.  Fantastic!.  I play golf with Dave Feeny .  And I never would have known any of these people without our shared love of music,  But without a doubt, the best of the best is having my wife Kelli being the most supportive wife any middle aged musician playing rockstar could ask for.  All this songwriting, recording, rehearsing takes a lot of time.  I couldn't do it without her patience and understanding.  I just can't push my luck in the guitar purchasing department. 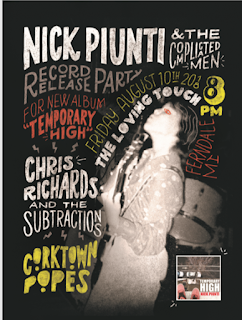