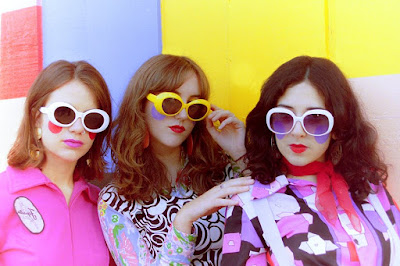 The curtain's rising on a cool new band of faces that will be familiar to fans of the Deadly Vipers. Ava East (guitar/vocals), Kate Derringer (bass/keys) and Kerrigan Pearce (drums) just put out their first single as Shadow Show. Their first show is Sept 15 at the Outer Limits Lounge with Krillin and Moonwalks.

The power trio is veering away from the heavier 70's rock/metal trip with the Vipers and heading into a trippy composite of a shoegazey, goth-rock haunted Desert Sessions inclined toward angular post-punk time signatures. What I always loved about what I've heard/seen from this trio in their previous band is that their arrangements always took things to another level...and then another level. Whether descending into darker spells, or just trudging even further into the fibrous fields of hard rock with surplus crescendos and snaky solos--that tactical and propulsive playing style carries over and then evolves with Shadow Show.

A twangy, reverb-splashed guitar ambles its way out of the introduction before its snatched by the talons of that rhythm section and ascending into a barrel roll. The hi-hats frantically pulse over that snare as the bass bends into expressive waves at high speeds; the guitars vary from fluid and expansive, to tautly reared riffs as the vocals continue that evocation of soaring through the verses, with notes so full and fiery they sound like their casting a spell, until they glide into the chorus and the cadence becomes as tight as the guitar hooks.

And after all of that, the song could easily fade away at the four minute mark and call it a day, but like I said, this trio have always found compelling ways to keep the excursion going, turning on a dime there and flying off to starboard to indulge in tones that feel just the right amount of sinister and dark, as the vocals start to sound like a robot, like... a "machine."

Eager to hear what comes next! Shadow Show will be putting out another single in September. Stay tuned.