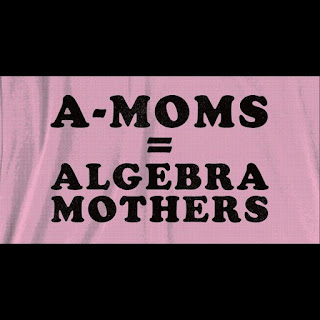 Some records instill a heightened excitement and anticipation to just push play... For example, if you, dear reader, are coming to this blog post having never heard an Algebra Mothers song, then I am a little more geeked than usual to just let it loose for ya...

That guitar sets you off, wobbly yet propulsive; those keys come in and add the appropriate nerviness with their jittery accentuation, eventually going into these hypnotic loop-de-loop melodies as the rhythm section crashes in and starts trundling forward, communicating without question, that this is a certain strain of punk-rock.

The Algebra Mothers were a radiant new-wave punk outfit formed right here in Detroit, back in the late 70's, developing during such a sweet spot of strange experimentation in punk as they we were moving past the ostentatious Dolls, past the speedy riffy Ramones, past the ferocious Clash, past the sloppy cynical Sex Pistols, and now, entering the wiry realms of Dead Kennedys, DEVO, and the Weirdos, with adventurous arrangements, quirky/theatrical vocalizations, and gnarly intonations. Into that world, came The A-Moms 1979 release of the single you're streaming above, "Strawberry Cheesecake" (b/w "Modern Noise" 7"-vinyl), released on their own label, Aftertaste Records.

The A-Moms were formed by four like minded misfits/artists/musicians/friends, (Gerald Collins, Ralph Valdez, Diana Balton, and Kirsten Rogoff), coming out of Detroit's Cass Tech High School. Over their time together, they've played all around Detroit, all around the U.S. and joined prestigious and ferocious rock acts like Destroy All Monsters, Pere Ubu, and Sonic Rendezvous Band. But, in 1984, the band came to an end...or so we all thought. Third Man Records reached out to a couple mothers, contacting Collins (who, at this point, had started a new band, Jeecy and the Jungle), and Valdez (who had a stint as a DJ for WDET) and discovered that they were sitting on at least an entire LP's worth of home studio demos and live recordings.

This Friday, Third Man Records presents A-Moms - Algebra Mothers: 14 never before heard tracks recorded between 1977 and 1984 in various home studios and clubs. It's their first release in nearly 40 years--and only their second ever!

August 17, Third Man's Cass Corridor outlet hosts a release party for the A-Moms, with exclusive pink vinyl versions of the new LP up for grabs. Jimmy Ohio and the Alternate Lovers is opening things up and the Heavy on Trash DJs will spin in between. Click here for more info