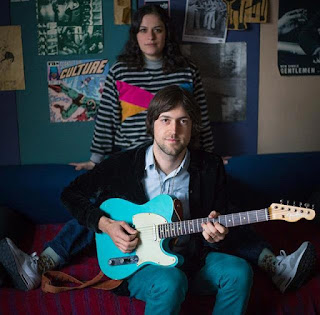 After my first time hearing songs like "Apple Tree" and "Whomi Gonna Be," they wound up stuck in my head for a solid two weeks. Jen David and Jeffrey Thomas are Jenny & Jackie and the duo create effervescent pop songs that may be minimalist in instrumentation but maximize melody and groove. Absolutely a groove--even if their percussive element is a drum machine, there's still an expressive bass inviting you to loosen up and sway. Elements of early 60's rock, late 60's reggae, and 90's lo-fi ambient-pop swoon together on the songs making up their new 12" record, Summer.

David's saxophone comes in for elegant and fluid accompaniments while Thomas' guitar takes a surfy-toned fender and slows it to a slick saunter, giving each of his notes a lot of space to breath and bend into a twangy vibrato. David's voice is something I encountered almost ten years ago in a beloved but bygone band called Illy Mack--it's got that special kind of subtle power, tuneful but radiant with raw emotion. Thomas takes the lead on songs like "Apple Tree," a lower register than David with a bit of a rasp, but still tuned in to a certain cadence in their vocal melodies that lends itself to complete and utter catchy-ness.

And I mentioned Illy Mack just now, but I could just as easily get nostalgic for Thomas' prior project, the garage-rock trio Gardens. But with Jenny & Jackie, they're moving things forward - distinct from either of their prior musical endeavors and creating not just indelible choruses and buoyant rhythms, but this endearing vibe. I hate to sound new-agey, but they do have a vibe, an aura maybe... And maybe it is that you can sense how in love with each other they are--and how that tenderness can unconsciously weave its way into the DNA of their recorded songs (and attain a luminescence in their live shows). Maybe that's too mushy for you? I still think you're going to love their music.

And even though I've heard some of the songs on Jenny & Jackie's forthcoming album (titled Summer) more than two years ago..., I have to remember that these two have been busy! Busy with life...like the one they're building together as a married couple. Busy as new homeowners! Busy as shop-owners...as the Third Wave Music store has made a cozy home just off the Wayne State campus on 2nd Avenue (in the Forest Arms apartments,) offering not just instruments, but lessons!

Anyway, it's exciting to see them ready to finally release Summer.

Oh, and this photo?? < This is when Jenny & Jackie came on to the Milo Show to sing "Apple Tree," back in the spring of 2016, (where they effectively used the actual eating of an apple to augment the aural ambiance).