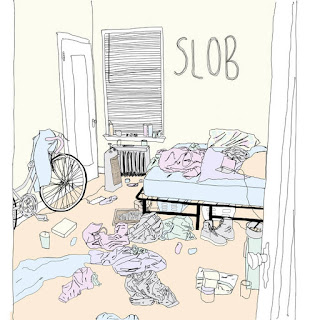 An invigorating new strain of punk has surfaced over the last year and a half with SLOB. Punk, is of course, too reductive to fit most bands, and that's of course the case here: some distinctive qualities are quintessentially unapologetic, raw, confrontational and dissonant, but there is some subtly intricate basslines, nimble guitar phrases and precise percussion, albeit sped to blurring tempos to propel this rollicking war rig through these two minute collision-course songs. A less-eloquent way to put it would be that you feel like you just got your ass kicked after 95 seconds with SLOB.

Valerie Kraft is on drums, coming from the world of SWEAT (ambient metal and heavy rock). Shannon Barnes is on bass (primarily known as the lead singer/songwriter for soul-funk hybrid White Bee). And Taylor Saunders is on guitar/vocals, and when the band completes a song, however brief the seconds, she is breathless with the eyes of disorientation of sudden reentry from some kind of trance. And the magnificent (and almost freaky) thing about that breathlessness is that she's, for the most part, standing still on stage (whilst playing/singing), but what you hear her doing with her voice--able to go from gravelly/demonic, to tuneful/ballady, to deep heavy metal roar--all in one song, makes it feel like she (and you) just ran 12 flights of stairs.

0:53 seconds into "Bleed," the band cruises into a bridge that allows for breathing room and almost sounds like an alt-rock 90's song, slowed down and riffy, with emotional lyrics...until the narrator asks for a place where she can kick, cry,  scream "bitch," and moan as loud as she wants. Suddenly, the pedal is slammed and the song accelerates again until it's as if the gas tank explodes and it's all you can do but jump out of the car.  I don't know where the car metaphor came from--probably because like all great punk/metal bands, SLOB evokes a sense of being in the passenger seat, at the behest of a driver who's eager to find the adventure, the catharsis, the thrill, the defiance...in jerking the wheel one way..., and then the other. You just have to hold on.

SLOB's new EP is out now. You can find it on Spotify.
Posted by jeff milo at 9:00 AM