Set aside appealing to our dark sides, Halloween is, above all, escapism – and for local bands like Child Bite or Prussia (the Nirvana and Smiths referenced above) the Crofoot Halloween showcase provides them the unique treat of not only dressing as other bands (classic to contemporary) but also covering all of their favorite songs. For fans, they can easily lose themselves as well, transfixed by the illusion – as a dozen wide-eyed Nirvana fans—most of them too young to have ever see Nirvana—embraced it and started moshing to some classics from Incesticide.

So while you may be a Count Dracula or a Bride of Frankenstein, you’ll be front row in front for what looks and sounds like Rage Against The Machine. Let’s review, as well as throw out some favorite scary movies for the helluva it. 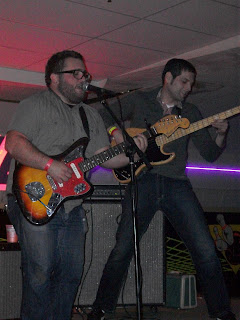 The Cold Wave (as Weezer): Fuzzy rhythmic indie-rockers grew from trio to quintet (Allan James, Sean Sommer, Ryan and Scott Allen and Gjon Gjavelini) while writing and preparing for an early 2010 full length recording. James toured with Javelins and Sommer joined The Friendly Foes with Ryan. “We are covering Weezer because we love Weezer and so does everyone else,” said James. James admitted “We’re not much for scary movies.” 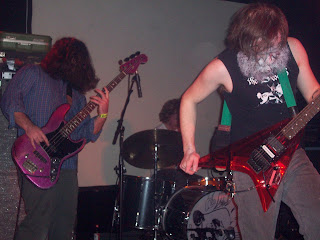 Child Bite (as Rage Against The Machine): noisy-poppy-metal-ey rock quartet had a “biggie” of a year; they released a series of split 7”s and toured with each “b-side” featured band; they wrote and recorded a new album with J. Robbins and aim for an early ’10 release; they toured the west coast and took their renowned fuzzy faces into competition in Alaska’s World Beard & Mustache Championships and now they head east. About RATM, “Like most good ideas, it started as a joke,” said singer/keyboardist Shawn Knight. About scary movies: “Way too many good ones to choose from; I’d probably have to say the Shining, or maybe Susperia—that one is fucked up too. Gotta love that score by Goblin!” 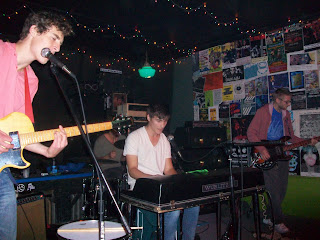 (as The Velvet Underground): space-folk/west-African-flavored-doo-woppers spent 2 months on the road this year and released a free EP in January. They’re working on their 2nd proper full length. “VU have always been one of my favorite bands,” said singer/guitarist Ryan Spencer, “all of ours, probably.” Scary movie? “The Shining!” 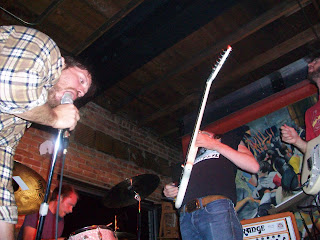 Bars of Gold (as The Talking Heads): Gaunt grooved, big booming indie rock quintet (four-fifths of Wildcatting) are working on their debut full length. Since their first show in March, “we’ve been chugging along, awesomely,” said drummer Brandon Moss. Talking Heads was a mutually respected band, specifically in sound. “I’m looking at it as a bit of a learning experience, that is, coming from the bombast of Wildcatting.” Favorite scary movie, a dark horse: “Monster Squad!”
~ 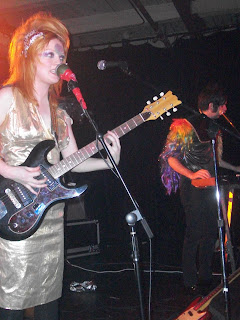 Silverghost (as DEVO): New-wave electro-pop duo (sometimes trio) released a free digital EP, toured the west coast and played the Henry Fonda Theatre two sequential nights to a sold out crowd, with Murder City Devils. Locally, they headlined a Cityfest stage and the Hamtramck Blowout pre-party. Next month they’ll combine both of their EPs with new material on up and coming The Few Records and work on a full length in December. “DEVO” said singer/keyboardist Deleano Acevedo “made us believe it’s our duty-now-for-the-future. We love their punk and anti-establishment mentality.” Movie? “Exorcist (unedited) or Texas Chainsaw Massacre.”
~ 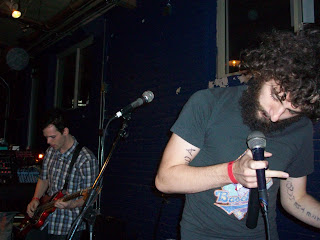 Marco Polio & The New Vaccines (as the Yeah Yeah Yeahs): no-wave leaning/techno-leaning electro pop duo is now becoming a trio, adding a human drummer (Scotty Stone of Rogue Satellites joins Steve Puwalski and Michael Langan) and swears they’ll have a disc out before they die (keep your ears peeled in ’10). “We were going to do DEVO but found out Silverghost had it covered. The YYY’s came out of the cosmos and hit me in the head from space,” said Puwalski. “(Singer Karen O.) is a big influence for me.” And he picks “Signs,” since it triggered intrinsic fears of aliens.