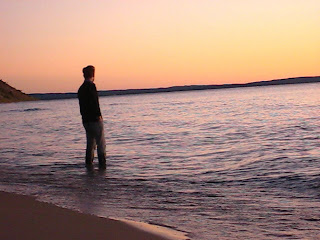 Sean Lynch and I cover a lot of ground – from coffins to lollipops.

“You’ve been in love with someone before, right?” he asks me, “or you’ve obsessed over someone or something?”

I stutter and stall, momentarily disarmed.

“It doesn’t much matter who or what or why, but you can’t give one reason why…” he goes on – and it aptly answers for the songwriter’s perceived over-meticulousness regarding the recording of his current main music project, 800 Beloved’s debut full length, Bouquet – as well as submit inability to explain that the strange, haunting dreams that came to him through the dead of last winter bringing images of bodies of water and the color purple – subsequently inspiring his current recorded work, Everything Purple.

He is aided by bassist Stacey Metesheva and drummer Scott Masson. 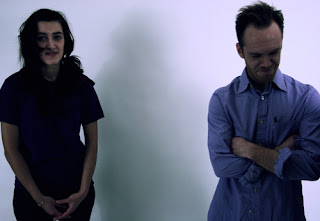 Sorting through the dark dreams and inexplicable illness that befell him in January (setting aside that a coffin had been stored near the foot of his bed during that time), Lynch, after returning to health with less cloudy dreams, quickly started laying out the subject matter for Bouqet’s follow-up, titled Everything Purple.

“There’s really only two sorts of underlying themes in the whole record and it’s this competition between what people instantly think of when they think of the primary blue—you associate water with it—then you take red and, there’s a lot of things you can associate with the color red, but one thing that might make your list is some type of desire or temptation. You get your painter palette out, you mix the two and voila…Everything Purple.”

“It’s one of the things I’ve ever done in my life, be that with painting or writing or music, that I’m not entirely sure I’m really that responsible for any of it,” said Lynch, who reveled that he had recently returned to painted canvases for the first time in ten years. He returns to those initial dark dreams, speaking of them as, almost, a period of trance. “As much as I’d love to dream about lollipops, and, I dunno, juts wonderful things, you can’t really control your dreams. So I had no idea why I was dreaming of these things.”

“I guess it’s more of a record about knowing where the painter fits into the landscape. I can paint a pretty landscape but to participate in that landscape is a whole different sort of activity.”

For Lynch, who also works as an engineer (having self-recorded Bouquet, as well as fellow-Milford-ite Deleano Acevedo, with Marcie Bolan, on Silverghost’s Equine EP), the reflections upon music are never as abstract as some writers who talk about influences or the “feelings” of songs – for Lynch, the lines blur and his mind often toggles through the entire experience, from idea, to writing, to playing, to recording, to mixing (even though their latest single was purposely left un-mixed—more on that later), to releasing, to returning, to reflecting…

“You know how labor intensive the last record was,” Lynch says to me, as I first met him in summer 2006, while Bouquet had already been started and had already been an intense experience, let alone the two years that would follow. He shrugs off Bouquet, humbly, admitting that three years doesn’t necessarily equal instant masterpiece. “I was writing to write, writing to make sense out of things that happened in my life,” he says, going back to 2005 when he stayed, temporarily, at his family’s funeral home in Milford. “I didn’t have too much to make sense of then, except that in 2005 I had a broken heart, and then in 2006 I became so hyper-focused on something that seemed impossible to finish that that seeped into 2007. Before I knew it, it was 2008 before it had a copyright date on it.” 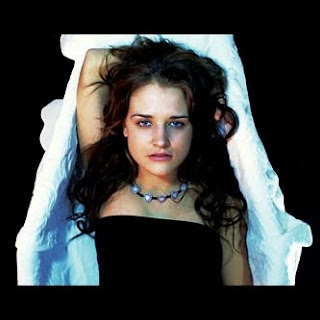 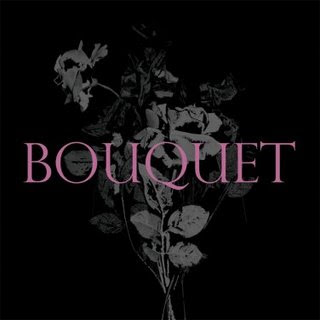 “So really, the last five years of my life, I don’t know what the fuck I’ve been doing. And, it feels like the last, maybe, year, I had a clear idea about something and I just needed to make a couple of changes in order to be sort of free to experience some of those things.”

“And it hasn’t been until, maybe, the last four months that I felt like someone broke all my equipment, broke all my guitars and everything, all my tricks and then they taped it all back together and said, ‘Here, now play it!’ and…now, it just, to me, (the new songs) just sound better.”

Whereas Bouquet touched on all sorts of dark and dreamy musical shores – such as gothic-tinged new-wave, dystopic dance-pop, atmoshpheric shoegaze and clattering post-punk – Everything Purple on the other hand is almost entirely live instrumentation – very little computers and almost no sequenced drums. The feel is looser, more upfront and earnest, or “preciousness without the sake of it being cheesy.” There’s acoustic guitar, the vocals and guitars aren’t fuzzed by any pedals and has something like “75%” less synthesizers than Bouquet. There’s also hardly any mixing - maintaining a rougher hew, but still not punk, no, in fact Lynch even uses the word “folkier” and “janglier.”

Which runs the risk, he acknowledges, of alienating the crowd that attracted to Bouquet. Or maybe, “they don’t give two fucks about it, but they might wonder, ‘Oh why aren’t they doing ‘this’ anymore?’” Which leads to the optimal balance of the name 800-Beloved – where as Bouquet could play into the chillier dark space of the insensitive info-mercial dial-up recalling “800,” then Everything Purple could play into the more sacred, or near-and-dear side of the “Beloved.”

“In past interviews, a lot of funny things were written like, Oh-Lynch gets his stuff from teen vogue magazines and pop culture and…that is all true but at the same time, it doesn’t mean that I’m not moved by something like a love song, or I can’t believe in being entirely haunted by something that I don’t have a reason or a definition or any tangible evidence as to why. (Everything Purple) does challenge; it calls to mind to what end people can be patient with, or focus on, subject matter. It deals with, either obsession or hyper-focusing on something to a point where it seemed most people’s attention spans would just crumble.”

Along with writing and demoing Everything Purple, Lynch has spent the second half of 2009 adjusting to his recent entry into The Hounds Below – Jason Stollsteimer’s re-started project from 2007, originally a sort of side-project for the Von Bondies—now a full fledged band with four other area musicians – Molly Jean Schoen, Brandon Macdonald, Ben Collins and his old friend Jeremy Freer.

Seemingly nonchalant about the collaboration, Lynch surmises, “It’s another way I can be out there, playing with musicians and trying to be, I guess, to be democratic in the scene without having to only hide out in Milford and paint pictures and write about…I dunno.”

That phrase ‘hide out in Milford’ sticks with me and I pursue it. Sean’s local appearances (be it live with 800 Beloved or just out for shits and giggles in the audience) are often limited by the demands of his work schedule – often putting in ten days straight at the family funeral home before getting a day off.

“Don’t get me wrong, I love hearing how music sounds live and I like the interaction between the crowd, but I feel like you could do that once every couple of months and it could be much more magical and you could put much more into the production of it. There’s only a couple of motivators when it comes to rock n roll music: one of ‘em’s getting laid, the other’s getting fucked up, the other’s getting paid…and the other’s probably just good old fashioned—hearing-stuff-loud. So, all of those things, I don’t need to go and put on a guitar to go and do…” He pauses, “Like, the last time I checked, jerking off is a pretty solitary activity and I don’t expect people to pay five bucks to watch me do it.”

So implementing the funeral theme, attracting the more gothy electro kids and momentarily storing a coffin in the house, have been set aside for the more precious “purple” aesthetic.

“I feel too many of the younger kids have…, the ones that listen to us, they look at me as if I’m like this dark character and…no, I have a kitty-cat, and I like really light fluffy things. Yeah, I work in a funeral home, but that’s what I do to pay the bills. And then, they don’t know how to digest us live, because Stacey has a very interesting character, very in her own world, and Scott looks just far too good to play with musicians like us.” (He would add later, of his longtime friend, Masson that, he could probably start, write, record and finish an entire pop album in one day if he really wanted to…)

In regards to his never giving “the live thing a fair shake”: “…the misconception is that you have to show up on a stage, four feet in front of someone to…(affect) people. Maybe it says more about the fact that you didn’t do your job right when you recorded the song – it’s an argument of proximity, really. If I can affect you and I don’t even need to be in your same state, than I’ve done a much better job than the person who goes and plays 40 shows in 40 days…”

Lynch gets elusive when it comes time to pin down future plans, particularly regarding Everything Purple. The recordings are coming along, he said, thanks in large part to the help (and sometimes much needed nudge) of Masson. He hints at, potentially, a December release for “EP” (originally titled for it’s acronym, as it was meant to be an EP…though there are currently seven or so songs on it, in some form or another). Then again, he says at another point that he isn’t entirely convinced he’ll release it, yet, if at all. What is certain is that he will continue writing, he will move onto the next thing (song, album, painting, anything)


the Zombie Dance Party 6 - 10/31 at the Magic Stick - with Electric Fire Babies - and The Garbagemen (Cramps cover band).myspace.com/800beloved