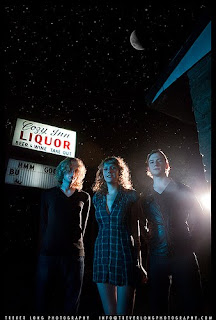 
“There are a lot of bad things that happen when we all hang out together,” Ben offers and in my mind I snap my fingers for that almost being a quintessential quote in the conversation regarding Lightning Love. The trio are like a gang – you’ll often find them dangling from the bar together, hanging out on the sidewalk for a smoke together, and just embracing all the mess of daily drama together and laughing in its face.

You kind of have to when you all live in a house together.

But they take it all in stride – all the various slings and spills of the nightlife from the fun and the wily to the duress and the heartbreak – to headaches and glare of the day time, from day jobs to songwriting to figuring out the next move for the band.

This echoes in their songwriting: the sprightly humming pianos leaping like hopscotch over shimmying rhythms and cutting guitars providing a bit of grit and muscle to the outfit – Leah’s incorrigibly “cute”- voice spewing anecdotes of trespassing all the nooks and crannies of the city under a haze of heartbreak and alcohol; setting some mischievious scene of these three shoulder-locked blonde-haired youths standing in the shaded corner of the after-school special throwing crab-apples at the pony-tailed chicks in pleated skirts and emasculating the convertible-driving varsity quarterback with cutting Freudian commentary in their worldly wise-ass way.

Leah said she thinks the forthcoming album is “more grown up. I wrote (November Birthday) without thinking about releasing them or having people hear them. It was just a fun experiment for me to write songs on my own. This time it was more the mindset of, people are going to hear this and, I have a greater knowledge of what it’s like to be in a band. I think we’ve grown a lot.”

“It’s filled out better,” Aaron said, “because we arranged (the songs) as a band.”

Ben also noted that the minimal guitar dressing on November was a conscious choice for aesthetics – but now the full band will pulse through most of the album.

“I think the first record’s kind of sad, more, and this one’s a little more…” Leah pauses, “angry, or something.” She chuckles. “Not that my music ever sounds pissed off, but…it’s a little less sad and a little more…”

“As Leah and I get to be better friends,” Ben says, “her music gets angrier and angrier.”

Which brings us back to their thick-as-thieves dynamic as band mates, house mates, drinking buddies, et al.

“If we didn’t have just a whole shitload of inside jokes…” Aaron shakes his head, “we talk in our own language.”

“And none of us are too egotistical,” Ben adds, “It works well; if we suggest something to each other, nobody takes it personally. You’ve got to develop a song, not a part.”

“I’ll very happily admit that I can write songs,” Leah offers, “…for the most part, but I’m not a great keyboard player.”

She continues “…There’s some shit that I fuck up at and I know that, so it’s really good – I’m happy if Aaron’s telling me, just today, that I was rushing.”

“It’s not like I’m calling her out or anything,” her brother says.

Over the last year or so, interest is growing – be it measured in growing crowds at their local shows, their invitation to tour with the Von Bondies, a headlining slot at City Fest or heading down to to play with Bad Veins. That doesn’t mean the band didn’t work their asses off that first year, playing a lot of rough and random nights to gain momentum.

Leah says they were lucky to become acquainted with fellow musicians who instantly appreciated and supported them – including, of course, their “adopted older brothers,” Millions of Brazilians, but also Greg McIntosh from Great Lakes Myth Society and Brandon Zwagerman – helping them obtain a formative slot at Mittenfest in .

“There’s a degree of confidence now, I guess,” said Ben, looking back, “but it’s slightly nerve-wracking. I just don’t wanna fuck up what we’ve already done.”

“I know it’s not realistic to do the band thing forever,” Leah says, who, just as her lyrics reflect, is often looking toward her future. “I work shitty jobs, now, so that I can be in a band, that’s my first priority, but with my other goals in life, it can’t always be my first priority. So, right now, is like, the time for us to be doing this and I really want to do it, cuz I’m never goig to have this chance again.”

Ben, like a 2nd younger brother, verbally elbows the girl, “Yeah, you’re getting older every day.”

“Anyway, we have dreams,” Leah advances, “but as far as goals, we’re trying to be realistic.”

Their forthcoming album is not titled yet. Though their hovering around simply self-titling it.

“Yeah, Aaron sold the naming of our album for a beer,” Leah shakes her head.

“I thought it was for your soul,” Ben points to him.

“Oh, and then he sold the name of our album for another beer.”