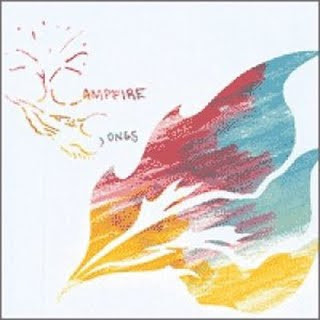 Six-ish years ago, whilst still coming into my own musical consciousness - and because of a few formative spins of Animal Collective's 2nd album, Campfire Songs, it forever effected my perception of the phrase "field recordings." Whereas the songs collected here are definitely leaning more toward "song-songs" then actual provocatively arranged audio recordings of strange and mysterious natural noises from various outdoor locations - I would wind up applying it to bands who just decided to record...their songs...outdoors....whether they were near "fields" or near the forest, or near the highway, or around a "campfire." I was just that affected by the imagery of three members of this Baltimore-born/NY-set space-folk band ("Avey Tare", "Panda Bear" and "Deakin") recording live on this screened porch with clattering percussive instruments, acoustic guitars, sitars and their own weird muppet-y mantra vocal beeps and angelic howls, with the rustle of trees, the hush of wind and occasional buzz of bugs wiggling its way along the fringes of each song's recording.

The idea was to capture that meditative lull, that soothing aloof stare, that potential for eureka-spurring reflection, that often befalls many who settle down around a campfire and become transfixed by the wayward flicker and sporadic crackle as the leafy fingers of tree branches form an almost-roof - onto a record that you could bring inside, into your living room, or put onto your headphones. Their wandering vocals, hazy and wind-like, the singers spilling over each other in harmony, but swept randomly, like leaves blown over each other ("Two Corvettes") occasionally stopping abruptly, calming and recollecting itself, letting the wind and the birds get their chance to chime in over an eerie ruminating guitar duet ("Moo Rah Rah Rain"). The rousing guitars of "Doggy" makes it easily the most mobile feeling song, initially at least, with its hooks and aggressive strums - eventually catching its breath and settles into another cross-legged sweet-nuthin hum of a chorus - but then starting up again on those guitars.
"Field Recordings" that aren't exactly field recordings - and ambient record that isn't entirely ambient or spacey - a folk record that's just, definitely, not a folk record. Just something to explore. Like any campfire, something to stare into, find peace in and receive warmth from, before heading off again.
Paw Tracks (the label AC members helped start and run around the time of Campfire) wanted to avoid the risk of this record going out of print (from it's original output on Catsup Plate). Now, in January 2010 - it will be available digitally for the first time.
Yes, it's November...so January is not that far off...nor is the snow and the cold and the mittens and the chill and oh man, I could already use a hot-chocolate, just thinking about it.

More info on Tiny Mix Tapes
at Paw Tracks
and from Animal Collective
Posted by jeff milo at 5:24 AM