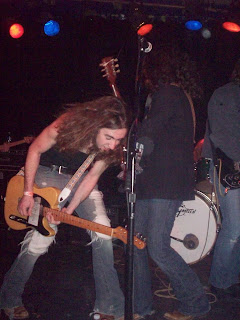 ...and so, the strange and gluttonous (yet still warm and fuzzy) holiday of Thanksgiving will come and pass...and we will all settle into a black-Friday-recovery, either from all the beer we scenesters guzzled on Thanksgiving’s eve, (supposedly the craziest bar night of the year), or from all the red wine you downed to better tolerate your family the following afternoon.

Saturday night should be enough time – by then, you’ll be ready for the Satin Peaches. For one Peach, it is a home-coming on a few levels: singer/songwriter Jesse Shepherd-Bates (known recently for stints with Mick Bassett and his own project, the JSB Squad), is returning to the band he helped found more than four years ago.

The shaggy, stylish young chaps of indie-rock quartet The Satin Peaches will be headlining the Magic Bag the Saturday after Thanksgiving (11/28), with seminal blues-rockers The Muggs, along with Woodward and Matt Black opening up. Not just a homecoming for J.S.B., but also a homecoming for the band after a few dates around the Midwest/rustbelt; and this is only part of the band’s extended “homecoming” after severing from Island records to re-root themselves back here at home, releasing their latest EP on the local Sleek Speek label. This Magic Bag set will likely feature lots of new material, stuff we’ll likely hear on a record in ’10.

Head over to their site or their myspace - apparently there's a press conference welcoming the "new" player back onto the team for the big game.