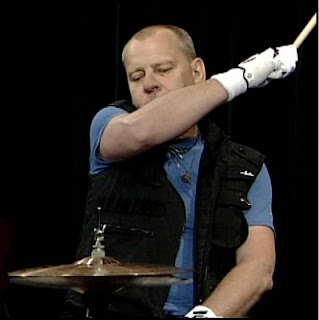 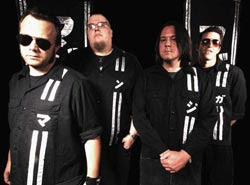 Taylor (pictured-side, with Mazinga) put together the innaugeral "Ann Arbor Rock n Roll Revival" nearly 8 years ago, to the day. The original featured Powertrane, Deniz Tek and Ron Asheton, reuniting the latter two for the first time in 20 years. The Paybacks, a still-at-that-point-up-and-coming rock band, opened that show and the show wound up setting an attendance record (that would hold until Spring 04). The 2nd show was booked for April of 02 and a year or so after that, the third Rock n Roll Revival welcomed Mitch Ryder to the bill.
This time around, "Folks should expect a killer old-school Rock n Roll show," said Taylor - whose unwavering support of local music (be it classic or conemtporary) is highly commendable. "Hiawatha Bailey will be joining us on stage to perform a tribute to our late friend, Ron Asheton. We'll also have maximum-cosmic-rock (with Mazinga) opening the show, as well as Scott Morgan performing Rationals songs with the irRationals, a group that features Detroit garage rock stars Matthew Smith (of Outrageous Cherry) on guitar, Jim Diamond (of Ghetto Recorders) on bass and Dave Shettler (of SSM) on drums." Deniz Tek will also perform.
12 / 18 - The Blind Pig - 9:30 pm $10 (advance tix available)

Thanks for the nice post Jeff!
Fans can buy tickets online here

Hurry this show will sell out!

Thanks so much!
MGT and KIMMMER