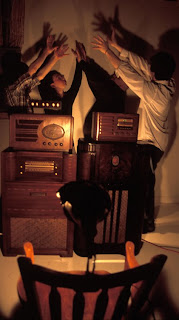 I was talking to Eric Allen last night, about various things, work, writing, old PBS documentaries on doo-wop and working on music...
It always inevitably drifts towards - so....what shows are coming up?
And that's always an ominous question, the week of Thanksgiving -
He initially referred to The Sights / The Beggars / SSM / The Barrettes 11 / 25 at the Magic Stick - (a show celebrating the return from the 2-year-quasi-hiatus of Eddie Baranek's most main project and their vamp up for a tour and eventual album release next year.
I said, then, of course, the alternate titan-esque line up would be The Readies / Lee Marvin Computer Arm / Silverghost / Terrible Twos / Johnny Ill Band 11 / 25 at PJs Lager House - (as Terrible Twos return to the local stage in what feels like a while, the Readies get welcomed back from their recent Brazil stint and Silverghost vamps up for their forthcoming EP combo release).
Then again, if you want something else - try the psyche-night - over at Donovan's Pub - with Electric Lion Soundwave Experiment / Oblisk / Solar Temple Cult (formerly Friends of Dennis Wilson) / The Rue Moor Counts (formerly the Birddogs).
~
Anyway, after you're all stuffed with beer, wine, tryptophan and stinging with awkward silences from your segregation to the kiddie table - we can look forward to calmer waters (less drunks out on the road) and get back to the more traditional, less-titanic-battle of shows on the weekends:
Like, for example, coming to see the final performance of local indie rockers The Recital, -part of the Suburban Sprawl collective, the band will release their third EP (and fourth/final proper release) via the Michigan label and, upon the tenth anniversary of their last show, they'll hang it up, as a band...
Helping bid them farewell, as they release The Succulent Leftovers EP - will be Thunderbirds Are Now! and Zoos of Berlin - at the Majestic Cafe - on 12 / 4
Wanna song?
The Recital - "Kid You're Wrong"

It was certainly interesting for me to read the post. Thank author for it. I like such topics and everything that is connected to this matter. I would like to read more soon.