Update: As a recent Real D story goes to press (and, potentially after the deadline) The Electric Lions Soundwave Experiment, the quartet featured in this interview, are no longer on the bill for the show to which readers are directed – on 11 / 25 at Donovan’s Pub.

The band stll has a story to be told - as they finish up work on their 2nd LP for a 2010 release - and it also would deserve mention that it's members make up 80% of The Glass Orphans, the house-band for Theatre Bizarre's Wonderland burlesque/variety show - on new year's even weekend at Hastings Street Ballroom.

So, before we go forward, this writer thought it’d be good for you to keep in mind the other bands on that bill (at Donovan’s) – as it still stands as a strong sampling for the psychedelic scene, here in Detroit. 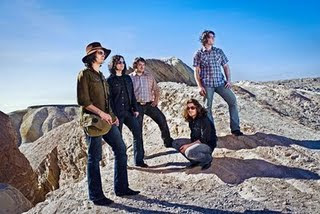 Solar Temple Cult is a new project featuring members of the Friends of Dennis Wilson (Tony, Sam, Brian & Brandon). Where as FODW (pictured above) explored the more scorched desert landscape vibe, the rough and tumble solidarity of bikers rolling along long stretches of undulating highway off into the oblivion of cerebral stretches and surreal revelation – Solar Temple Cult is less of a surf-toned rock thing and more of a darker, atmospheric take on shoegaze – with a fresh dressing of psychedelia, and also seeing frontman Tony move back onto the same line as the band as he picks up a guitar and explores new terrains as a vocalist/songwriter. 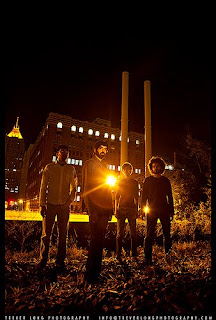 Oblisk, meanwhile, is working on new songs for the eventual follow-up to Weather Patterns, which will be their 3rd proper LP. The band feels as though their starting with a clean slate, after some line-up shifts through the first recordings, with these latest writings coming together with a set line-up. Singer/guitarist Asim Akhtar indicated these tunes to be their most experimental yet, being guided by the ethereal, hypnotic heartbeats of trip/hop - ala Beta Band or Massive Attack. Simultaneously, they're still the ultra-fuzzed, hard-driving psyche/shoegaze rockers that you've seen perform through '09 - in fact, on some new songs they're pushing it even further. The end result: the beat is leading them on...and hopefully, as Akhtar has indicated to be a major goal for a year now, the beat leads them to an eventual European tour. 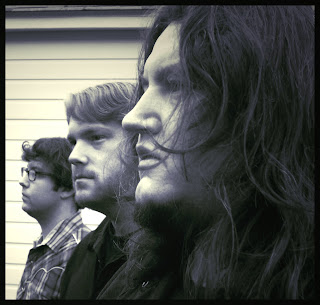 The Rue Moor Counts are a quartet formerly known as The BirdDogs, and they've recently finished recording their 2nd proper full length - for an early '10 release. Singer/guitarist Rob Buxton thought the name change appropriate after a line-up shift and a venturing into both a bigger, more textured sound - and the general palette-cleansing they went through with a recent 7", to grow away from past sound's tendency towards bluesy-flavored rock. Buxton expects many listeners to be surprised and appreciative of this more straight-up rock n roll/loosely-psychedelic record.

In the meantime - back to the Electric Lions Soundwave Experiment interview with singer/guitarist Rabeah Ltief. 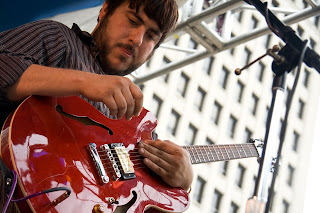 The Electric Lion Soundwave Experiment know, that with their swirling, bending tones, thickly layered fuzzed out tapestries and overall head-swimming sway, that the word “psychedelic” will inevitably get thrown on them.

And why not, since the quintet (singer/guitarist Rabeah Ltief, keyboardist Hussian Berro, guitarist Mike Latcha, bassist Paul “Pookie” Grech and drummer) are all certainly appreciators of that grimy, hard driving garage rock sound, dented and fried with the smoky swirl of lava-lamp trip-outs. But Ltief believes it’s deeper, or at least more nuanced than that – that now, with fellow psych rockers like the bluesy Rue Moor Counts, the space-rock of Solar Temple Cult (formerly Friends of Dennis Wilson) and the shoegaze onslaught atmospherics of Oblisk – continuing whatever tradition of “psychedelic music” simply means a shared philosophy that reveres the beauty of tone and the power of volume.

Ltief, along with Latcha, are finishing up the final touches on the band’s 2nd full length album.

Their first record (from spring 08) came out when the band was known as The Electric Lions and had more of a bluesy, garage rock sound, with a bit of surfy sunny slides and a hint of a pop-hook. But lately, said Ltief, “…it’s not about that, those 60’s riffs or whatever. It’s gotten to the point where it’s pure experimentation…” He notes particular inspiration from the musicality of Rue Moor Counts latest forays into whole other realms of bluesy psychedelia.

For their follow-up, under a new moniker and embracing a more expanded, darker, atmospheric sound, Ltief said that, “it can sound evil, but it’s very rich, the sounds are really there.” I remark on his use of the word “evil.”

“For me to be moved by music, there has to be a sadness of some type, or catharsis; whether it’s nostalgic sadness or whatever. It’s important for the listener to get that feeling inside them. It’s something I have a hard time putting into words…”

Which is fine, cuz the man can let his guitar do the talking for him. The tones are striking, the solos—which intertwine with the academically trained shreds of Latcha, are devastating, and the warmth and rhythm given by the accoutrements of Berro and Grech make for an arresting plume of throbbing tones and charged reverb.

The chemistry of Latcha, Berro and Grech, not only as musical partners to Ltief, but as musketeer-esque band of buddies, seems a heartwarming rumination for Ltief, considering it as close as he’s been to “musical nirvana” with a group.

Ltief said he has been forever changed by the experience of working with his band and songwriter/poet Drew Bardo in scoring the soundtrack to last year’s Theatre Bizarre-produced burlesque-tinged interpretation of Alice in Wonderland. He and Bardo reached what were, for Ltief, new atmospheric, particularly cerebral depths in songwriting, with the “house band” that is now known as The Glass Orphans.

Obviously with the follow-up (hopefully out in spring), there comes the stress of pushing for a label. At the end of the day, Ltief said that they’re “happy enough to have a good show;” particularly while sharing the stage with their friends.