It is now the 13th year for what is the largest gathering of local musical talents in the country (hell, maybe even the world), and it's right in our backyards; nestled betwixt the narrow streets of charming Hamtramck.

There's a schedule for the bands (up to 200) and all the venues (15 bars/halls) listed here. Over at MT's site, you can beef up on the history of this hurried, harried, mad, musical, celebratory event, here.

Last year, I wanted to give a handful of some of the performing bands a chance to make their own personal picks - of where they'd like to be, the spots they want to hit, the bands they want to see... (Read about last year, on DC, here)

Well...why not try that again? With a cast of fresh faces (and fresh musical genres) - with a handful of new bands making new picks...

(the full schedule's printed at the bottom) 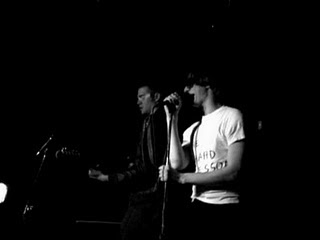 This week - it's the notorious Jesus Chainsaw Massacre - the main pair (though they're a full band), includes Bryan Metro (vocals/mischief) and J.R. (vocals/guitar) - the pair are perhaps as known for their internet-set screeds via their band blog as they are for their noisy and destructive if not passionate and exciting...live shows.
JCM performs at The Whiskey In The Jar at 10:40 pm, Thursday, Mar 4th

Ed. I feel like I should run a disclaimer, similar to major networks before they air infomercials - about "the views expressed are those of..." "and not of..." etc etc..., journalistic integrity and all that..., here we go... - JCM doens't wear kid gloves or walk on egg shells, they're a very much call-it-as-they-see-it type... (empahsis, if you will, on 'they') - as is evidence (pre-forewarned) on their blog 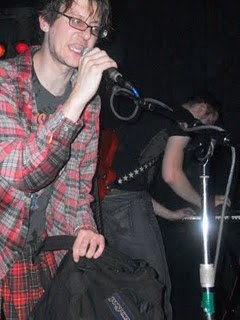 "I like the chaotic element of Blowout. I always go on and on about how the current scene, if you will, is quite dull and predictable, but Blowout at least gives you options. "Uh oh, I'm at Smalls and they're breaking out brass instruments; time to go to New Dodge. Hurm, the acts at the New Dodge consist exclusively of bands with animals in their names; time to go to Kelly's. Ha ha just kidding. Let's go to Paychecks." Its best quality is the variety, both in venue and acts. Where else can you see all of these bands playing over the span of one weekend? That was rhetorical.

Wed 3-3
- I am obligated to be here at the pre-party to represent the Lavender Blog and I can't say that I'm thrilled. Is Mirror Twin Deastro's new band? I want to catch some of the Displays because, according to the local media, they have been in high school since 2004. I also want to catch Computer Perfection because, like us, their blog is better known than their music.

Thurs 3-4
- I wish I had the Metro Times Blowout preview issue right now because I hardly recognize any of these bands, though that is more my fault than their's, I think, maybe. We just did a show with Carradine, so they're cool, obviously. Other than that, the Paychecks lineup looks okay. Carjack is fun. Zoos of Berlin is talked about on blogs and I can see Fawn claiming the title of "Local Band That Opens for Big Local Bands and Mid-Level National Acts" previously held by Child Bite, Millions of Brazilians, and Silverghost. Of course, we'll be performing at Whiskey in the Jar at 10:40 and I'm probably the most entertaining person for 15 minute intervals in town.

Fri. 3-5
-I am going to try my best to catch Elle and the Fonts, Woodman, Marco Polio because, God knows, I haven't seen them before, refill my geritol at G of C Hall, and ending the night anonymous commenting at the Satin Peaches, followed by closing out the Belmont with Friendly Foes. I'm hoping Ryan Albert will have me on stage for a battle rap since Smoke is on a different showcase. I'm pulling for (Lady Gaga's) "Bad Romance" because that would pretty much win Blowout and everyone damn well knows it.

and - if you're still reading -

Full disclosure - I am friends with the people that are considered to have been the rap act - SelfSays*.

I really wish folks would preface a random "worst insert musical genre act ever" with a "best insert same musical genre act ever." At least give an example of someone they actually believes does a decent job. To call SelfSays 'the worst' is laughable by a generous stretch, considering the rest of the world seems to think he's pretty talented.

J.R.'s part is what is wrong with blogging. There is no filter and foolhardy comments are made that can potentially be harmful for the victims of misdirected angst.

What is good about blogging is there is an unchecked level of transparency, at least we are well-aware of who spews such hate and know to avoid said person.

*SelfSays is one person. His real name is Charles Vann. Google him - see what the rest of the world thinks of his music. You can also ask around what people think of his live shows as well. He's pretty transparent too.

hubert, i saw the act at the majestic cafe. i do have some basis. the entire set was in shambles with rhymes off beat and devoid of keeping up with the beat. if you want an example of a good local rap outfit, check out united states of mind, leaf erikson, or smoke. they definitely have their shit together and put on a good show. perhaps selfsays, is a talented individual, but from what i have witnessed, it remains to be seen. the performance was forced and amateur-esque....so much so, it drove the clientele out of the cafe and the audience that remained kept asking, "when is this over?" hope this helps, pal.

J.R., I understand you were at the show and you are entitled to your opinion. I am not taking that away from you. I just wish you would not use some harsh language without qualifying your statements, especially in such a public way.
The reason I ask you qualify your position with your taste is that the whole "offbeat" thing you heard in SelfSays' rhymes is actually a Detroit hip hop staple. J Dilla/Slum Village basically made the off-kilter flow cool. The rap acts you make mention of tend of stick to conventional styles, which is good too.

Now I was not there and I can imagine Self having a bad show. The music from his '09 release isn't necessarily conducive for live shows as the clodding beats and slow tempos are not par for the normal course of hip hop, but I am sure he performed them the way he recorded them. It may not be your thing. That does not make his music "the worst" though.

I appreciate your response. Thanks.

i havent heard the recorded material, but the live presentation was so off-putting that i have no desire to seek it out. if i wasnt playing that night i would have walked out like everyone else.

what is interesting to me is, "the whole "offbeat" thing you heard in SelfSays' rhymes is actually a Detroit hip hop staple." there could be an interesting comparison here between detroit hip hop and detroit garage rock. ive always felt detroit garage rock has a unique regional sound where it is indeed sloppy. mistakes in recording are overlooked and left in. hmmmm....

in my opinion, selfsays was the worst rap outfit i have seen to date. perhaps selfsays (the individual) was overshadowed by the idiot crass obnoxious white kid that was up there with him.

hubert, you have intrigued me and i now want to see/listen to selfsays in solo form

True enough Charles and I were sloppy that night. We've only begun performing together and it is clearly a work in progress.

I'm not sure I understand the reward in devoting a blog paragraph to trashing us, but I've never begrudged anyone their aesthetic agenda. People who hang verbiage like "worst ever" on experimental art are not asking anyone to take them particularly seriously as critics or intellectuals.

Fortunately folks like Leaf Erikson, USM, Smoke, etc, who have supported me and collaborated on projects with me for years have been able to overlook my idiocy, crassness, and obnoxiousness to see the value in my work. Check me out at docwaffles.bandcamp.com, if you're not too busy hating on local artists in public forums.

Dear the guy from the Jesus and Mary Chainsaw Massacre,

Thank you so much for this informative and poignant article. It’s about time a Detroit artist spent two-thirds of a blog post regarding an upcoming local music festival describing how every participating band but his own and the other one in which he has a guest spot is terrible. This city really needs to be taken down a peg or two, and with fingers like claw-hammers on the keyboard, your trenchant blows will surely raze the scene in a manner which I can only hope will plow the way for fresher acts in which you are also a member. We can all learn something from your musical prowess and borderline social functionality. I look forward with baited breath to sharing the stage with you at future events. You are a paragon of originality, a class act, and a true patriot.

With Love,
Jeremy, Beekeepers (the one that looks sort of like Brendan Fraser.)

PS - If you couldn’t tell, I was being sarcastic!

PPS - I just realized that last line could in itself be interpreted as sarcasm. It is in fact sincere.

PPPS - Pot luck is at Terry’s tonight. It’s your turn to bring the Barq’s!