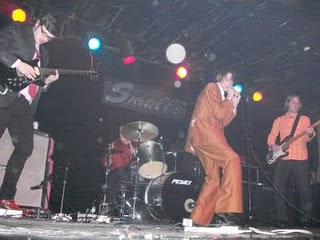 More "picks" from local Detroit bands on where they're going to be/who they want to see - when the 13th Metro Times Blowout comes around - on March 3rd (through March 6th) - taking over the streets of Hamtramck. Line ups of four bands will be featured in 15 venues, for four straight nights. Something like 200 bands - playing bars and venues throughout the cozy Detroit satellite.
Info here - Schedule here - News here - and, if you'd like to get to know Hamtramck, -info here.
In the meantime - on with the picks 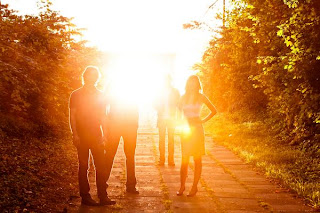 First up is the electro-pop/trip-hop leaning shiny-fuzzy-beat-heavy charm of Lettercamp - featuring vocalist Liz Wittman and guitarist Matt Lannoo and Derek Dorey on bass (making their pics); the quartet also features Shane Ford on keys.
Lettercamp plays at 10:30 - Friday - in the G of C Lounge.

Both Wittman and Dorey regretted the fact that the event is held at a still-yet-cold time of the year--it may be almost--Spring, but in Michigan, that can still have a bite. One doesn't necessarily need to carry a coat around bouncing from bar to bar if you grit and bear it - since most places are packed enough with other humans that the bodyheat thaws all. Still, Dorey said, around Detroit, it can be "colder than a witch's tit in a brass bra doing push-ups in the snow..."

That said, "the Blowout is a great event becuase it get's a ton of people from the suburbs to spend a full weekend in Hamtramck," said Lannoo, "a city which they would otherwise normally never hang out in. It's a great mix of locals, musicians and non-musician music fans drinking their ass's off and supporting the local music scene. Even with the terrible weather it is well attended - imagine if it were in july!?"

Wittman said, "The energy. I remember the first time I went to a Blowout, the first year I moved here. I was overwhelmed with how much support the local scene got. And how well received every band was, and it was so cool to see a scene so strong and to see everyone supporting each other."
Dorey, meanwhile, offered: "I love
that the Blowout is full of hipsters wanting to get drunk because I spot out the ones with the tightest jeans and the stinkiest arm pits and I buy them as many pbr's as it takes to get them completely drunk because when they're "pissed" they are way easier to persuade into coming back to my basement which is wrapped in plastic and I stab them repeatedly in the neck listening to Tools "aenima" to drown out their screams until they stop breathing because I will one day be known as the "blow Out Butcher!!!!!!!!!!"

[Damned if that isn't a fine piece of flying off the cuff with a good sense of humor...either that, or we should all be mindful not to take an offered PBR from Dorey.]

Their picks: Dorey pointed to The Hadituptoheres headlining the Belmont, midnight on Thursday (3/4).

Lannoo suggested the gang's all here vibe of the Wednesday (3/3) pre-party as "the storm before the storm." And suggested seeing The Beggars (Saturday, 12:30, Paychecks), "...they never disappoint and it's a great excuse to hang out at Paycheck's. -Must catch Octopus too (Friday, midnight, G of C Hall), because they melt my face." 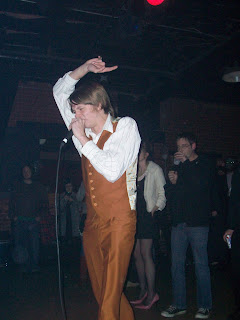 Over the years, I've gotten pretty good at maximizing my Blowout time to see as many acts as possible- here's to doing it again in that whirlwind weekend!

Wednesday-
There'll be some great entertainers- The Displays (Magic Stick) and the Sugarcoats, (2nd stage, Magic Stick) notably, but I'll probably stay only as long I can stand running into everyone in the city- eventually I get social anxiety.

Thursday-
8:40- SNAKEWING- Small's
Stop in and say Hi to Melody and Finally fulfill my promise to see Phil's band. Start Blowout proper with some energy. I see no downside.

10:00-POTIONS- Atlas
I'll sneak up the block to catch the psych-rock sounds of Richard Wolfiel's band. Rich seems to always have himself involved in something good.

11:00-CARRADINE- Atlas
I haven't seen these guys yet, but the songs I've heard are like a comp tape of the best of 1994, so I'm intrigued. I do wonder if they regret their name now that Dave Carradine went the way of the guy from INXS though...

Runner up: Jesus Chainsaw Massacre- I haven't seen the new guitarist yet!

FRIDAY
9:20- SCOTT HARRISON- Baker's Streetcar
Baker's is always a cool/weird place to see a performance. Scott Harrison used to front the criminally under-appreciated BATTLING SIKI, his songs are excellent. For fans of Tom Waits or the Stones without the dad-rock vibe.

9:40- THE JULIETS- Gates of Columbus Lounge
Well crafted Pop music. Lush arrangements. This is headphone music. Also, you gotta give it up for those Keys.

IF I weren't Busy at 11:40 I'd split my time between WOLFBAIT at small's- classic NWOBHM sound and the JEHOVA'S WITNESS PROTECTION PROGRAM over at paychecks. I'll have to take a raincheck, guys.

12:40- MARCO POLIO & the new vaccines- Paycheck's
Every set these guys play gets better and better. there are some great bands playing at the same time, but for my money Marco Polio will put on the most engaging, electrifying show of the weekend.

1:00 ...This is a total toss up!
OLD EMPIRE (at Skippers) are one of my favorite bands around, and have been for years, but THE WRONG NUMBERS (all the way down at the new dodge) blew me away at a gig a few weeks ago. I will literally make up my mind at the last minute.

SATURDAY
9:20- DEVILFISH- Paycheck's
Slam bang surf punk featuring Pierce from OFC. If the blisteringly fast musicianship doesn't blow you away, wait for the man-boy antics of Pierce between songs. Its great!

10:20- DUENDE! - Paycheck's
This is usually about one hour longer than I like to hang at Paycheck's, but Duende! is worth it. Easily one of the best bands in town right now. Loose in all the right places, tight where it counts. Ole!

11:20- SCARLET OAKS- Painted Lady
Yeah the sound will suck, and the bathrooms will give you VD, but that's the charm that keeps me coming back to the old mainstay- Not to mention the fact that Scarlet Oaks write some of the best songs I've heard in awhile. I never get tired of seeing these guys and girl perform.

12:00- MOURNING VOICES- Skipper's
Vaudeville-like harmonies, bluegrass instrumentation and some very catchy tunes. Anthony Retka of Tone & Niche with some of Detroit's folk luminaries put on a show that rocks- without a fuzz pedal or drums for a crutch.

1:00- MICK BASSETT & the MARTHAS- Belmont
Considering I worked at Belmont the last few years, its only fitting I end Blowout at my Favorite rock bar in Hamtown. Mick is a busy guy lately, and I'm not sure I'll get the chance to see his band play for a spell. Do yourself a favor and meet me there for a last round, and catch a great band.

Runner-up: SISTERS OF YOUR SUNSHINE VAPOR; Probably the best psych-rok band in town. Check 'em out!

Shamefully not included: PEWTER CUB and THE MANTONS. Write your local congressman.

its fun to see someone rip off metro's writing style