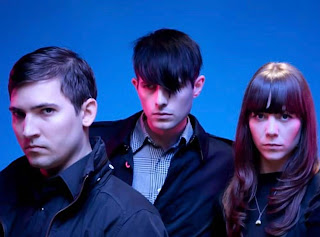 “How strange…” This is Wesley Eisold’s own afterthought upon himself, when he says he feels good about the future.

Truth be told, I didn’t know what beautifully bleak revelation of his to lay upon you first – that the tri-synth, fuzzy-goth-fried trio, Cold Cave, that Eisold started four years ago in Philadelphia was “never intended to be a band, a live band, a functioning band,” or its existence, its recordings, its live performances are “an extension of how it feels to be alive in the present future world.” Eisold, (whose past includes stints with hardcore outfit Give Up The Ghost), Dominic Fernow (notable noise maven with Prurient) and Caralee McElroy (multi-instrumentalist noted for dynamic vocal contributions to darkwavers Xiu Xiu), “is just beginning and has mostly been a live thing so far.”

Eisold is devastating in his succinctness regarding society – from its embrace of technological advances furthering our detachment, isolation and complacency, to the disconcerting and foreboding behaviors that detachment breeds like mold in the amorphous corners of the internet. But there seems so much more to him than, as quick journo-write-ups will cast, flat out using words like malcontent – his misanthropy may not be absolute, potentially eased by the experience of . Perhaps we’d like to simplify and wrap up this goth-pop-spurred youth growing up in the late 80’s with pages of notebook scrawls dressing a simple apathy with his cutting poetics, when really the truest summation should be that this is a passionate artist – a singer, a writer and a live performer – who wore the skinned bloody pelt of hardcore punk, started his own publishing company (Heartworm) and finally started playing an instrument (albeit a cold obeying robot-like synthesizer) for his latest, Cold Cave.

“()’s a way to manifest the confusion and contradictions that occur every day,” said Eisold. “You can cry, dance, love, lust, hate, to a lot of our music. In writing songs, there is a beauty that is incomparable to anything and that is that the music gets to say what no words can.” The east coaster embraced Philly as a hidey-hole-with-cheap-rent for his synth-surged experimentations.

As 2007 became 2008, he recruited Fernow and McElroy, both already prominent artists in similarly darker realms of electronic music be it freaked noise affairs to abstruse folk and started releasing 12” and 7” recordings as Cold Cave – some of which would be collected onto the debut-full-length Love Comes Close, an impressionist-cut blurred, punchy odyssey of clattery fuzzed beats, chilly-toned melodies, banshee guitars and coaxing low-to-mid sing-speak serenades – simultaneously a huddled nocturnal escapist record on the malcontent side, and an undeniably danceable affair ready for the floor of any club’s gathered bodies – on the empathetic side.

On live performance: “For me there is more concentration than in past bands I've played in. I use to act out how I felt inside in hopes of attaining some catharsis. I know this is not possible. I feel an affinity for the people in the room when we play. This is new for me. Our performances tend to be more abrasive than the records. We like to think of the set as a piece as opposed to individual songs.”

On synthesizers: “Often I want the most digital plastic cheap synthetic sound because that is the world I feel. It isn't an authentic environment. Its a cheap reproduction of truth and sincerity. I want to take warmth in the cloak, by using the facade.”

More info on the band - at their new home--Matador Records
or the band's site.