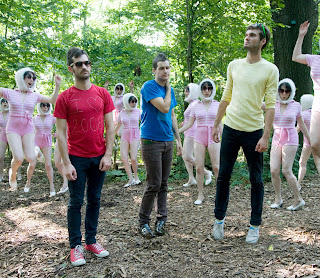 “We get bored really easy,” says Jeremy Mendicino, “our music is firstly and foremostly, a result of our over-indulged ears.” The Boston-by-way-of-Burlington engineer shares half of the singer/guitarist/frontman duties in keyed-up-kick-pop collective Pretty & Nice. Mendicino joined the group (originally started in 04) after helping them (and by ‘them,’ we refer, presently, to only-remaining-founding-member, singer/guitarist Holden Lewis) record their debut, Pink & Blue.

“(2009) was real busy on the touring and drumming front,” said Lewis. “We did four or five tours with about as many drummers. Lots of travel goals were fulfilled too; we toured Europe for the first time last fall and we toured with an Australian band before that, so, lots of culture. We’re now very well cultured.”

“Plus,” adds Mendicino, “we had horse meat for the first time.”

Also in 2009, they, through their Sub-Pop-subsidiary label, Hardly Art, released the tight, tugging deluge of feverish hooks, breakneck riffs and sweet sunny melodies, Get Young to many a warm review. The 10-song punch parade of spasmodic rhythms, synthesized sugar-splurged-banshee-blips and gurgles, mid-to-high-range vocals so honeyed and wavy it might almost feel right set to dreamy west coast beach-bound cruising if not for the more provocative caustic hew given to some of the chillier, more metallic scuffs and slams of certain songs.

DC: What's the story...in your own words...How and when did the band get together?

Mendicino: Once upon a time, there was a little gnome by the name of Gondwart. He lived in a magical kingdom called Hotbath and spent his whole life tending his music garden, tilling the tender soil, spilling the precious wine. At the end of his temporal physical experience, he gifted (with no tax benefit) his garden to me. I immediately planted a sacred tree to elevate the vibration of the garden, and shortly after planting the tree, a man named Holden knocked on my door. It seemed the tree had drawn him from his path and into my garden by a force inexplicable. The tree bloomed and transformed us into birds.

Lewis: My turn to tell the actual story? Ok, so J and I got together up in vermont with some other folks and then we moved the band down here after we put out our first record. We toured a whole bunch with a motley, rotating cast...

Lewis: ...and were lucky enough to make more friends all over the place, so we could tour a bunch more. We booked our own tours for 2+ years before we had any support from a label or an agent. That was pretty tough work, with not much to keep us afloat monetarily. If we weren't in 'The Lean Years' right now, I'd call those 'The Lean Years'... Presently, J and I spend a lot of mano a mano time writing at home or in the studio. Luckily we have some folks working with us to help book tours and looking out for new opportunities. We still do a majority of the work ourselves, but it gets a lot easier when people are helping out!

DC: ...what was the recording process like for Get Young ?

Mendicino: Well, during Get Young, Holden and I were both working full time, so to begin with, the record was born of over-working ourselves and chronic falling asleep at the mixing board... but then waking up in time to press stop.

Lewis: There's a lot of tinkering.

Mendicino: And we don't let other people in. Having Bobby record the drum parts on Get Young was a Huge letting-down of our collective guard.

DC: ...having a lyric like "just to be sarcastic" flow into a classic mindless pop thing of serenading "lah-de-dah-de-dah" in one song - makes me wonder if there's a conscious irony anywhere, at least on the batch collected on 'Get Young' - and how strong is it - if intentional at all - as many seem to pick up on the hooks and rhythms, the new-wave leaning, the confrontational Get Young title...i'm wondering if its all part of a larger philosophy you share/hold - regarding music, hard, fast, pop music, its perception perhaps from older jaded crowds? its relation to punk-styles (as there is 'grit' to these pop songs)? and if this energy is turning genre/style-fixation and postmodernism-fixations on their heads...not sure if i'm getting at anything, but if i've percolated anything - feel free to rant...

Mendicino: We are, to put it succinctly, very much aware of the apparent irony in our work - we've taken to calling it 'post-irony;' sort of an irony that learns to negate itself. Perhaps a better word is simply 'over-aware.'

I don't know if there's a specific 'philosophy' involved here. And any confrontational element is certainly not directed toward an older crowd. The older stalwarts seem to be some of our biggest supporters! If anything, I'd say that the younger folks today (our gen. and younger) seem to be trying to grow themselves up really quickly. Read one way, "Get Young", means to let go of that; drop the weight.

But, basically we write whatever makes us feel good, happy, excited to play or listen to.

Mendicino: On the jaded crowds note, Get Over Yourselves, oh patrons of the arts. Basquiat built Rome in a day, and his crown was made of the purest chocolate. Your crowns aren't even tasty!!

DC: Could you comment on influences, people often name drop Costello or XTC - but how about Brainiac?

Mendecino: Well, Holden and I wouldn't have had the same first encounters had it not been for Brainiac, and Enon, and then, ironically (or better put, sensibly), John Schmersal ended up being a big part of getting Get Young out with label backing.

Mendecino: Trying to focus on present plans right now..., but, as time does seem to linearly move forward, I'm sure our present plans will appear futuristic soon...