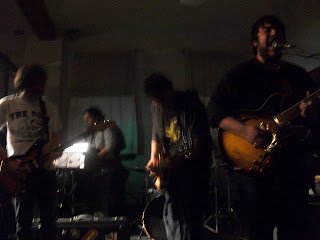 The psychedelic, dorkish, -freaked-out, summer BBQ, rock fest -returns to the CAID for it's fourth year. (Here's a proper intro to catch you up). The music starts around 9:30 pm on Friday for a full nights' worth of bannds (including sets from The Electric Lions, Satin Peaches, Blase Splee, Marco Polio & The New Vaccines, Hi-Speed Dubbing and more... )

On Saturday afternoon, between each night’s musical menus, bicycle enthusiasts, pedaling proponents and 12-speed gangers can gather at the C.A.I.D at 1pm to ride on a city-wide scavenger hunt. Split up into teams of a handful of riders and launch through the streets – meeting back at the C.A.I.D. before sunset to crown the winner before the music starts.

“The big thing about this year,” said LocoGnosis chieftain and Duende singer/guitarist Jeff Howitt, “is that it shows where we’ve come and it gives an idea of where we’re going to.” He referenced the quasi-evolution made visible by “new projects” from past participants in Blue Moon, how the line ups have changed but the family, the faces, the people, have remained –

Acevedo, Bolan, Reynolds and Walker return for their 3rd and 4th times but with different projects – while the embrace also widens for new Moon visits from Electric Lions, Satin Peaches and Blasé Splee.

“The many faces have many different roles,” Howitt said.

"For me," said OFC/Pigeon singer/guitarist Ray Thompson, "every year anxiety waxes as time wains leading up to the blue moon. Then, once it hits, its a mad pressure release, its the loss of inhibition, and an overwhelming feeling of love for the city of detroit and the people that live here."

The Electric Lions were putting the finishing touches on their 2nd proper full-length at the end of May. Singer/guitarist Rabeah Ltief spoke of the valuable addition of guitarist Mike Latcha, an Oakland U music student and aspiring sound engineer, to the group, not just for his recording insight but also for his, forgive my own cliché, propensity for the face-melting dreamy-dazey-shreddy guitar solo. 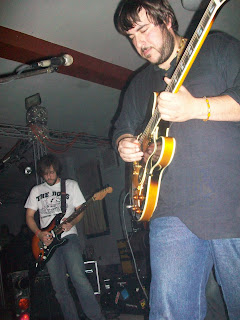 The new songs are still “in the realm of the psychedelics,” Ltief said, who is also aiding in the album’s production. The music, the chemistry of the band on stage and in the studio, Ltief said, has grown so tight and enthralling that it naturally forms “a trance, like a drugged-out vibe,” to the point where “I found myself having to wake-myself up sort of, after playing.”

“People say this all the time, it’s taken as a joke, but i want people to feel like they’re fucking high. You can reach points of euphoria without even drugs and i think music is one of those things that can take you there.”

Much like his WONDERLAND/Glass Orphans collaborator, Drew Bardo, Ltief has also seen the latest production (or overall development) of his own rock band somewhat decelerated, but now that summer’s here, the pace along with the temperatures are both rising.

The Lions have welcomed the return of drummer “Spazzy” for the recordings’ wrap-up, bringing “such a breath of fresh air.”

“I feel that we’ve stumbled onto something that’s just not what you would expect; it’s going to have a totally different vibe than what anyone has going on right now. We have a whole bunch of songs now, spanning our transitional period from the more bluesy garage minor-psyche influences to coming over to the more pure psyche. And, I was talking to Asim of Oblisk the other day, that “psychedelic” is nothing but a way you feel.”

Ltief said the band hope for a late summer release. 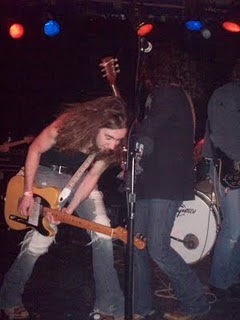 The Satin Peaches are still supporting the recent release of their 2nd EP, Arsenic via a slew of local appearances. The once wined-dined and jet-setting LA-bound youths had a false start at the big music machine’s ‘next big thing’ formula through 2006, which stunted the release of their first proper EP, Still Sour. Arsenic, by contrast, was an in-band production at their Detroit-based “Bunker,” with the newly re-welcomed co-founder Jesse Shepherd-Bates rotating in (as former guitarist Ryan Wiese headed to Mick Basset’s Marthas).

"I’m happy with the sound of it,” guitarist/singer George Morris said, “I always felt Morning Maid was a little over-produced. Arsenic is maybe more raw, but it captures the band a little bit better, because we’ve played it live and didn’t spend too much time on it.”

What started out as a bit of a space-rock tinged, dreamy punk-revivalist pop has now hardened a bit to a coarser, more chugging rock n roll raucousness, but still streamlined by a hook-heavy pop sensibility.

“When I came back in,” Shepherd-Bates said, “it was pretty clear that it was gonna sound a lot different. It took us a few months just to get used to playing with each other and now we just keep evolving as people and as musicians.”

“Lately, we’ve just been doing it and not really thinking too much about it,” Morris said of their freer approach. “The one thing that hasn’t changed is the live show and how we come across playing live.”

Arsenic is barely two months old and they already have 7-more songs ready for the next (and third proper) EP. The basic tracks are already laid down, and, mixed in there may be one of the cockiest riffs ever written, but listeners will have to wait and hear – later this summer/fall.

Both Morris and Shepherd-Bates are down for the bicycle scavenger hunt – how about you? 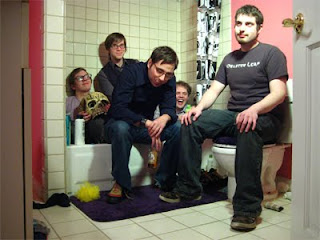 “People commented on how the last album was ‘genre-less’ or whatever,” singer/guitarist/pianist Carl Larson said of Blase Splee’s Et Cetera.

“So, we’re taking that one step further, I guess. I want every song on this next album to sound like it could have been recorded by a different band.” Said-forthcoming album is already written by Larson and guitarist/singer/organist Michael Frelick – now it’s just “structuring it, playing it” and “recording it.”

Larson said the process is fun because “...I’ll record some soft little ballad demo on my iPhone and send it to the guys (Dave Wisbiski, Tommy Tesnow, Jon Berz, David Jakubowski) and then it turns into a dance song at practice. Shit’s weird and I kind of have to just let go and say, ‘Ok, now it’s a dance song’, but don’t get me wrong: I’m never unhappy with how it turns out.”

The band is exemplary at staying in touch and reaching out to its fans – by posting demos online, live-blogging and handing out free “two new songs” –Eps during the 2010 Hamtramck Blowout.

Berz added his own enthusiasm to the forthcoming record. “It’s probably going to be more upbeat than Et Cetera...we’ve been spending more time on beats and rhythms and stuff, really destroying whatever Carl and Mike bring to the table.” He adds that last part with a wink, but then says, earnestly, “we’re really starting to polish up our live show, we’re all feeling more comfortable on stage together, moving quicker from song t song, improvising live; I feel as if we’re experiencing a kind of growth spurt right now.”

Berz, himself, is working on a solo record (whilst still collaborating with Larson and Frelick) and hopes for a late summer release.