Conspiracy of Owls drive me "raving mad" in a good way 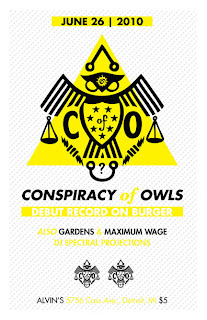 A self-titled debut (out on Burger Records...and eventually on cassette!)...

... "...Conspiracy of Owls have conjured exceptional surrealist pop on their debut album. Now, we can throw around words like “dreamy” when trying to delineate music of a psychedelic variety, but it takes the right, or rather seemingly-wrong, collision of instruments, noises, ideas and sensibilities, to musically assemble something that truly feels like the unstable, bizarre, this-morphs-into-that-and-that-feels-weirdly-right-inside-of-those….feeling! Either that or I’m concernedly reaching helter-skelter-type territory and should seek help. Either way, it’s all because of C-of-O’s new songs..."