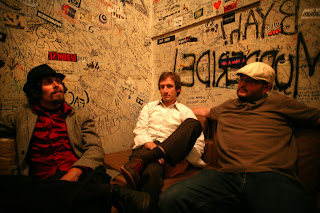 
“I remember talking to you a while ago,” drummer David Iannuzzi looks past me, down the bar to address his longtime friend, singer/guitarist Dustin Leslie, “and you were furious, actually, that we weren’t done with this album yet. You’d realized that that there was all of this hope, a new administration, the stimulus money, people thinking things are going to get better and you were like: No! We wrote this way back here, before!”

The pair, with bassist Clyde, make up Dutch Pink. Their batch of redemptive ballads, Times New Roman is, after a year and a half of hanging in limbo, finally being released (6/24 at the Magic Bag).

As Clyde had pointed out earlier, the album title is allegorical of Detroit being the modern paradigm of the Roman Empire’s ruin. “And the only reason it’s coming out now is because we actually lost our jobs,” he clarifies with bemoaned irony.

It’s fitting that their third proper full length be pulsing with redemption and, yes, hope, as their journey has been one seemingly better explained as a calling rather than the typical thinly veiled swaggering seek for fame – their manner is more blue collar, humble and thick with a reverence for friends, family, community and tradition. There were no goals (outside of Clyde relishing that first-free-beer he downed at their first show) and there was no agenda (outside of never forcing anything and maintaining their decades-long vibe for mutual concern and support between them). What started as two kids (Leslie and Ianuzzi) meeting on the ice as part of a traveling junior hockey team and later drawing their fellow Troy Athens lacrosse teammate (Clyde) into their gang, flourished into a quintessentially (and endearing) thick as thieves affair that would solidify on completely non-musical affairs. Leslie and Ianuzzi have been linked for two dozen years – and have had Clyde as an ally for nearly 20. Each attended Michigan State, Ianuzzi for architecture, and his two mates respectively both for literature.

They each individually nourished and developed both a love for music and a talent for, respectively, bass (Clyde) and guitar (Leslie and Ianuzzi). But music, or starting a band was never really talked about.

One fateful February, in 2004, Leslie called up the two of them (individually at first, though he soon found out they were both at the bar together that night to receive his call). A friend of theirs was playing a show and needed an opening band, in 10 days. “We didn’t even have a drummer,” Ianuzzi recalls. “And, Dustin said, ‘Well, you’ll play the drums.”

Whether it wound up working out as well as they’d planned, that night, is up to historical interpretation – what matters is that it planted a deep seed of inspiration into all three of them. Suddenly, the brothers, the daytrippers, the drinking buddies, the close comrades had a whole new level of bonding to mine between them – and they became somewhat possessed by this new musical motivation, spurring them down a 15-month road of almost militaristically regimented rehearsing and writing, leading into recording sessions with Tempermill’s Tony Hamera that lead to their self-releasing of two LPs and an EP. And this, all throughout late 05 into early 07 when Ianuzzi was attending grad school in Ann Arbor, swinging over to Ferndale constantly for a backbreaking schedule of shows, most of them local to help establish their identity but even a few tours here and there out around the Midwest and even as far out as Los Angeles.

Indulging a bit of hyperbole, they were in great shape when summer 2008 rolled around. They contacted engineer Dan Currie for what would become the Times New Roman sessions; the laying down of songs they’d already had written and ready.

Strange though, that the offsetting moment for Times was the flooding of one rehearsal space (Dustin’s basement in early 08), while something like that could be seen as a set back (certainly, as it caused the destruction of a lot of their equipment) and yet, it increased their motivation 3-fold when they set up in a temporary space – whipping themselves along through a marathon of late nighters that created these latest gritty, cathartic arias, from the sanctimonious sway of the organ-led “Lora Lynn” to the melancholy minimalism and pedal-steel poignancy of “The Tin Whistle.”

But more set-backs followed that initial flood. Both Ianuzzi and Clyde lost their jobs. Money became a factor. Financing studio time or running around playing shows, touring or any other kind of suddenly-more-wallet-weighted decisions had to be closely scrutinized.

“And, we were just beat, too, at that point,” Leslie recalls. “That’s 30-months of just non-stop 3-days-a-week of practices, six hour practices, while Dave was still working a full time job. We’d been doing it straight for four years.” 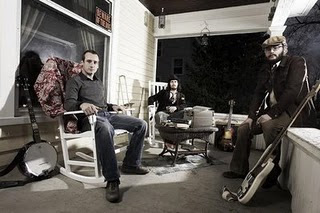 The band still continued to practice – even if confused wonderings and rumors began to lightly radiate that…perhaps they’d broken up? Leslie shakes his head at the fickle-flakiness endemic to some music scenes: “All of a sudden you don’t play for 5 months and you don’t exist!??”

Hyperbole aside, Ianuzzi clarifies it nicely when he shrugs, admitting that even when the planks of the bridge seemed to be falling out from under their crossing carriage – the release of this album was “inevitable. In the midst of us not playing last summer it’s not like I ever felt like this wasn’t going to happen…and very-soon too. For us, knowing each other and being friends first before doing music, it just seemed inevitable. How could it not happen when he’s my best friend and I’m gonna see him every other day, how is this not going to come up in conversation?”

Leslie calls the band a second family. Which seems to explain why they’ve been immune to frustration, at least externally, and never discouraged by inertia.

It comes down to “respecting the value of friendship,” Leslie says, looking down the bar at his mates. “Beyond that, even: community! Friends and the people that you care about are so obnoxiously important to who you are and you’re nobody without them.”

The dynamics of this band, and the heart each player exudes, are so much more nuanced when there is a thick bond of familial friendship between the players…and not merely a band thrown together in a garage to chase spotlights.

When asked then about Times’ songs that will now finally see the light of day: “Definitely more mature,” Clyde says immediately. “It’s slower, it’s not as crazy.”

“I think that comes with being more mature,” Clyde nods an agreement, this coming after Leslie acknowledges that the band has really sharpened, in skill and chemistry, in a likely observable or hearable progression from album-to-album. “You reach that certain point where you don’t have to overplay. You can let your other band mates fill out the sound. The most important note is the rest note.”

“It’s like every good writer,” Leslie said, “it’s what they don’t tell you that’s the best part. It’s how you get from ‘Joe opens the door’ to ‘Joe gets killed.’ You imagine that space.”

In the two years leading up to this, Leslie taught himself piano (which, Clyde notes, wound up being a key enhancement to the atmosphere of the record); Clyde, in turn, started fusing even better with his rhythm mate Ianuzzi and all three came to appreciate the insight, passion and assistance provided them by Currie (who previously worked with the Deadstring Brothers).

“When you’re looking from outside, you’re seeing the darkness,” said Clyde returning to their Roman metaphor for Detroit, “So, maybe just on one first listen to the album it sounds dark. But, once you actually are inside of the album, it’s got a lot of hope to it.”

Leslie jokes that whenever they linger too long on a major key during writing sessions they always “bring it back to the minor,” poking a little fun at the sometimes stark, gothy folk ballads they produce. But, he then clarifies that Times is, at its heart, about hope and redemption.

Leslie references Henry Miller, Depression-era expatriot and playwright: “Always merry and bright; you can write a song that is dim or sounds dim, but if you don’t remember and know what it feels like for things to be good, if you don’t utilize those feelings, then you’ve missed the boat.”