Burger Records is an indie label based in Fullerton CA , started up by members of Thee Makeout Party . It's been growing through the underground channels, even expanding into it's own music store. They specialize in high quality cassette releases. That's right; they, like other notables, are bringing it back to the tiny plastic bound, magnetic tape-spooled hand-held sound packages - the kind you have to press "fast-forward" as opposed to "skip(ing)" to the next track.

Read this feature on Burger from LA Weekly's blog - and check their facebook to scroll through the impressively long list of bands on their roster.

Who else is on the roster? Conspiracy of Owls. 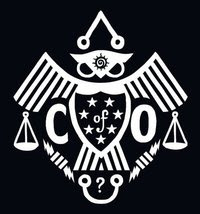 A new-ish band coming out of Detroit that will feature some, more than likely, familiar faces/voices/ and tones- to the Detroit rock scene's eyes/ears. (C-o-O's roster's collective resume spans many albums, bands, venues and studios of the Motor City garage/rock/psyche/pop scene). Initially started as a trio (as seen below) but recently growing to a septet.

Anyow, C-o-O are releasing their self-titled debut (via Burger) at Alvin's on 6/26. They're joined by Gardens and Maximum Wage - and are supplemented by a special appearnace from DJ Spectral Projections. More info at their facebook.

More info: Conspiracy of Owls
Posted by jeff milo at 9:09 AM