Spur of the Moment

My current favorite band existed in 1968. Maybe that "current favorite" slot will change in the near future, perhaps to fit some new hot shit, or maybe I'll slide back even further to a rockabilly crooner named Crazy Pete, from 1957.
Or, I could strive, -could spend my fleeting minutes on Google making sure no one else has written about whoever else I want to nonchalantly slide 'cross the table to you in proper bloggy clever clog exhibition, then blow that up for a few moments.
But I'd rather write against that and continue listening to Spur - some longlost Belleville IL based quintet of cowboy psyche-pop confoundables.
"(Buired) Treasure" will be the cliche most likely thrust upon any forthcoming written accounts of this Drag City re-issue of here's and there's from their studio sessions; but perhaps the bigger point could be that even though we have so much to look forward to, have so much surging through our screens on each new morning's troll and scroll of the daily blogo-hipsto-hype and blasted out ballyhoo...even though there's always something new - it becomes doubly overwhelming (and in fact, invigorating) that we can look back and find so much more that fell betwixt the cracks, while our society rode on, on it's own distracted, negligent tear through the amorphous early 70's' album rock malaise and into the gas shortage backgrounding mainstream Disco's bourgeoise blitz and then leaving those "treasures" wholly forgotten and covered in dust by the time the 80's arrived.
That's what happened to so many bands - Spur among them. To live for the next-hot-new-thing means that all you're really ever doing is compiling a killer (and I'll give you that, absolutely killer) Top/Best-Of/End of the Year list that assuredly compiles the coolest and most impressive musical entries of the passing calendar year...
But you weren't living in the moment - you were only just-waiting for that next new....new new new: Crystal Castles, Ratatat, The National, the next whoever, the new whatever - and here it comes and no, no time to enjoy it because you have to pounce on the next one.
All the while, Spur collects more dust.
That is, until another element that we have a plethora of (in this internet age of everywheres and everythings): Record Labels...specifically, Drag City - goes back like musicphile archeologists and uncovers these things for us. 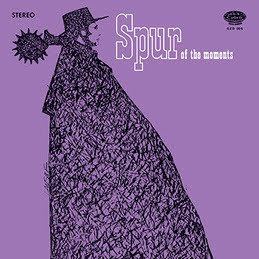 Well, enough of that rabble...about the future, and nextnewthingiosis, (cough cough).
Spur is a magnificent listen for all appreciators of the gravelly guitar tumbling psyche-pop of Byrdsian rodeo-psyche rock. The rich (but hazily fuzzed) sound billows forth with a sometimes-three-strong guitar gallop of surfy Fenders and jazzy Gibsons...as though the Ventures are next door neighbors with Wes Montgomery and the Flying Burrito Brothers are manning the grill for their communal potluck.
Spur of the Moment zings with that ethereal high harmonized hippie-nomad chant that could have slid in with impeccable comfort onto the Easy Rider soundtrack, yet it's meandering melodies and heady, teased out riff shuffles could likely bend the ear of the more esoteric or opaque-sounding freaked-up folkies of early Zappa or the more pallatable Captain Beefheart - but rake all the rest of that slightly adnauseum pop-worshiping, psychedelic-inclined, guitars-n-harmonies groups, from Traffic to Big Star or....well...name-dropping is weak. There's a bit of an dark and fantastical, urban-scuffed edge to some tunes, but then an all out effervescent rush of varrying flavors, frying jazz, country, rockabilly and power-pop till the juices all blend together - serenely sating all you sweethearts of the rodeo.
More new stuff soon.
More info from Drag City
Posted by jeff milo at 9:55 AM