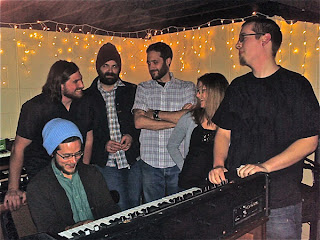 Their history’s just as substantial and nuanced as their sound. Red Iron Orchestra has been gestating as a band for more than a year, but the friendships shared amongst its players and the musical talents and resumes of said-players, stretch back a decade and beyond. 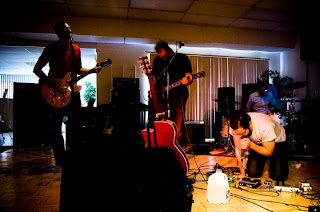 Ludicrous as “writing about music” can be, this is where words could falter – since the presentation, the form, the mood of the songs is all so grand – like a waterfall’s vociferous torrent (2-3 guitars resounding together) and drifting away to a disarming calm (their sense for sparseness and restraint) and propelled along by interlocked rhythms (sonorous piano, shuffling drums, heartbeat bass). And defiant against traditional ideas of pop (6+-minute concertos), and rock (genuinely atmospheric guitars, pounding drums heeding soft pianos/organs); with such a storied background between them further sharpening the sound, shaped with a stirring theatricality.

It's worth your while to listen to the guitar roaring trips of I, The Magician - the band that ties most of these players together. It would also give you an indication of what you're in for - but to solidify your sense, listen to Red Iron Orchestra here.

Singer/guitarist Chris Lavaque and singer/guitarist Randall Kupfer were both in I, the Magician as well as Old Tiger Stadium, while Red Iron's guitarist/organist/pianist Tom Currie has experience with Au Revoir Borealis, Saturday Looks Good to Me and Dykehouse....and, of course, also - I, The Magician.

Guitarist James Obenour was another from I, The Magician but also played in Hamilton. Drummer Brian Galindo (yes, I, The Magician) also plays in Few and Far Between. Bassist Nicole Margosian-Galindo rounds out the sextet, coming from bands like Lovesick and Charlevoix

“The concept,” said Margosian-Galindo, “was to regroup (I, The Magician) with one difference (me), and one change of instrumentation.”

Kupfer acknowledges the melting-pot amorphousness of influences, but harkens to early 90’s British shoegaze bands like Catherine Wheel and Slowdive, to poignant singer/songwriter auteurs, from to Damian Jurado to Lotte Kestner to Fuzzy Lights.

The Sextet are finishing up their debut at High Bias with Chris Koltay, aiming for a mid-summer limited edition release on label, Elkion Records.

They’re finishing up their debut at High Bias with Chris Koltay, aiming for a mid/late-summer release.

“The sounds have been really good so far and he makes recording at High Bias an extremely relaxing and stress free process, which is not usually the case,” said Kupfer.

“Working with Chris has been great,” Currie said. “We're all big fans of his work with Akron Family and My Morning Jacket, so we were pretty excited to begin working with him. His space in in very comforting and has an ambience that really lets you be creative.”

More info: from the Real Detroit feature
and the band's myspace
or - find them on facebook 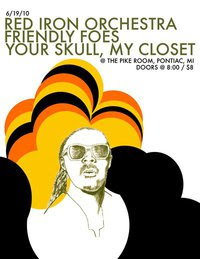